FOOTBALL: ‘Seán Purcell from Galway, that’s their dad; he is our grandad.’ – Westmeath forward Lucy McCartan 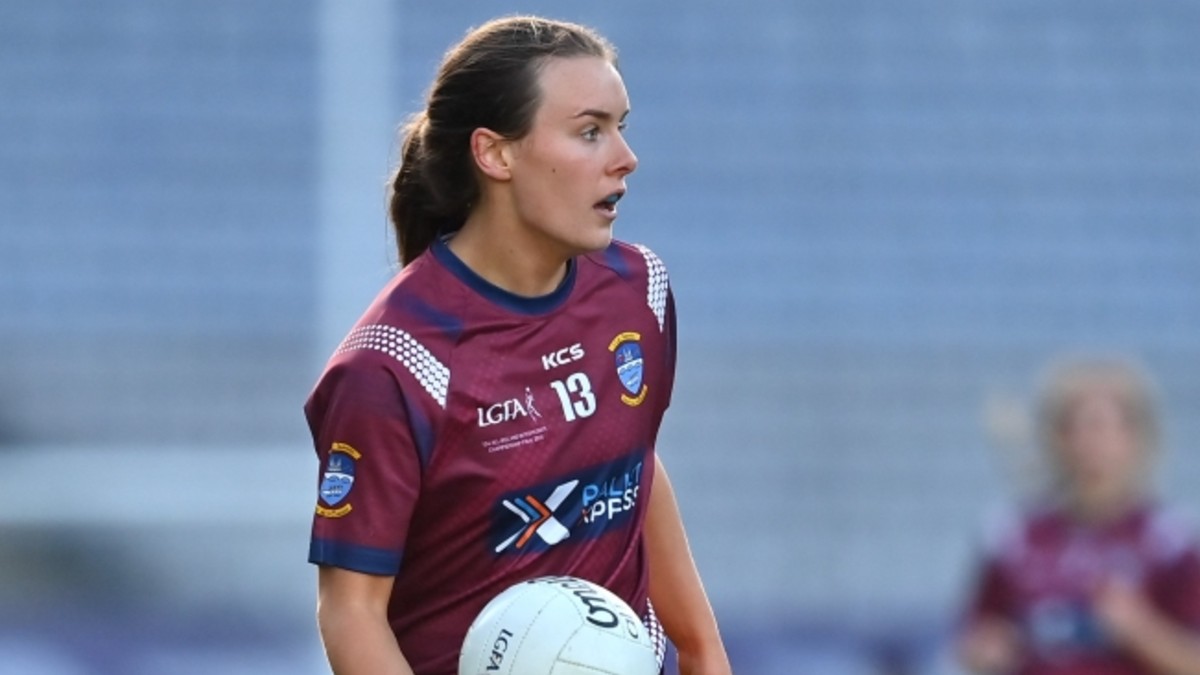 In 1956, Galway’s ‘Terrible Twins’, Seán Purcell and Frank Stockwell, led the county to All-Ireland Final victory, and 65 years later, two of Purcell’s granddaughters aim to follow in his footsteps and lead Westmeath to TG4 All-Ireland glory.

Four months on from the heartbreak of a TG4 All-Ireland Intermediate Final defeat, the county’s Crafty Cousins, Lucy McCartan and Vicky Carr, who lined out at numbers 12 and 13 at Croke Park, are back in the fold for the Midlanders.

McCartan (22) cracked home two goals for Sean Finnegan’s side in that loss against Meath, although the talented sports star ended 2020 with an impressive haul of silverware as a double-winning creative midfielder with soccer champions Peamount United.

And while she has returned to competitive training and matches on the soccer fields, this week’s announcement of a return to Lidl National League action has McCartan dreaming of glory alongside her St Loman’s clubmate and cousin.

“My mam and Vicky’s mam are sisters. They are Purcells from Tuam in Galway. Seán Purcell from Galway, that’s their dad; he is our grandad,” said medical student McCartan.

“My dad claims that our footballing skills comes from the McCartans from Down, but I don’t know about that.

“We have seen a couple of clips of our grandad playing. There were documentaries about the famous Galway teams and the Terrible Twins. I have seen a good bit of him playing, which is really nice. It’s great to have that.”

It has been a long three months training for all Ladies football squads, with plenty of individual fitness work taking place away from their teammates. That will all finish on Monday week, 19 April, with inter-county teams permitted to assemble once again.

Westmeath will get their Lidl NFL Division 1A campaign underway six weeks later, with Galway, Mayo and Donegal their opponents in three consecutive weekends.

But dual player McCartan already has competitive matches under her belt with Peamount, while the bulk of her training has also taken place with the Dublin-based outfit.

“I have been so glad to have Peamount going. It has been lovely to be able to focus on one sport and not have to be concerned about the clashes just yet. I have only really been training with them and doing some of the running with Westmeath.

“It is always tough playing two different sports. Rachel Kearns from Mayo is after going back to play soccer with Galway United and she is flying it. She has scored four goals in two matches.

“Chloe Moloney too, she plays for Clare and Galway United. She made the switch from Peamount to Galway in the soccer. It just goes to show you when you get the chance to focus on one you can excel.

“To be honest, last year I was a bit iffy. I thought that maybe I should pick one sport and go with it. Then the pandemic hit and I just realised when you miss them both you don’t want to quit either of them.

“There are tough times, there is always going to be clashes, but I feel like I am used to it, and it’s all about communicating properly with all management teams, keeping them up to date.”

As if playing top grade Ladies football and soccer wasn’t enough, McCartan is a fourth-year medicine student at UCD. On Monday next she begins her first four-week work experience stint at the Mater Hospital, where she hopes her recent experience of working in a nursing home during the pandemic will stand to her.

“This year we only have four weeks of placement, so I’m really looking forward to it. It’s just hard to know what we’ll be allowed to do. With the pandemic going on they will want to limit contact with patients as much as possible, not to be exposing people unnecessarily.

“I’d say it will be a lot of shadowing, watching and listening to what’s going on, trying whenever you get a chance to talk to patients.

“I really enjoyed working in the nursing home. It was tough going because the shifts are either 12 hours or six hours. If you are in for the full day it’s a long shift.

“My Mam [Frances] is a paediatric doctor in the Midlands Regional Hospital – she is brilliant. She was saying that doing those nightshifts at the weekend was really good practice for down the line when I’ll have to be doing that.”

Relegation from the Senior Championship in 2019 brought an end to Westmeath’s eight-year spell in the top flight, and December’s loss to Meath ended their hopes of an immediate return there. McCartan concedes that Meath were worthy winners, but that they are hellbent on going one better in 2021.

“Oh absolutely, everyone is mad to get up to Senior. We know how lucky we are that nobody came down and we have the chance to try and get up without another Senior team to compete with us.

“I thought Meath were brilliant last year. After we saw their semi-final result against Clare, who I had been expecting to push them hard, we knew it was going to be a very tough final.

“The goals were keeping us in it for the majority of the game. Even when we were level with them, they were still outscoring us. It’s hard to come back from that; they were brilliant.”

That loss has stoked the fires for Westmeath football again in 2021, and after a year when so many players had to experience defeat and glory without friends and family, Lucy was one of the lucky ones. Her dad Pat is the Westmeath Ladies kitman, another family member she leans on consistently.

“It was great having him here. All the girls love him. He is great, he’s always there that bit earlier than the rest of us to set up the pitch and stays a bit longer to lock up afterwards.

“I think he really enjoys it himself, getting the chance to go and watch matches. He and my mam both love going to all the matches and she really missed out last year. Dad was lucky that he was able to go along.

“I think everyone is excited now though. It will be so nice to have a bit of football into us after all the running. I’m sure our first training session will be a match of some sort. We can’t wait to get back.”