FOOTBALL: Serious Support – An Interview with Carla Rowe of Dublin 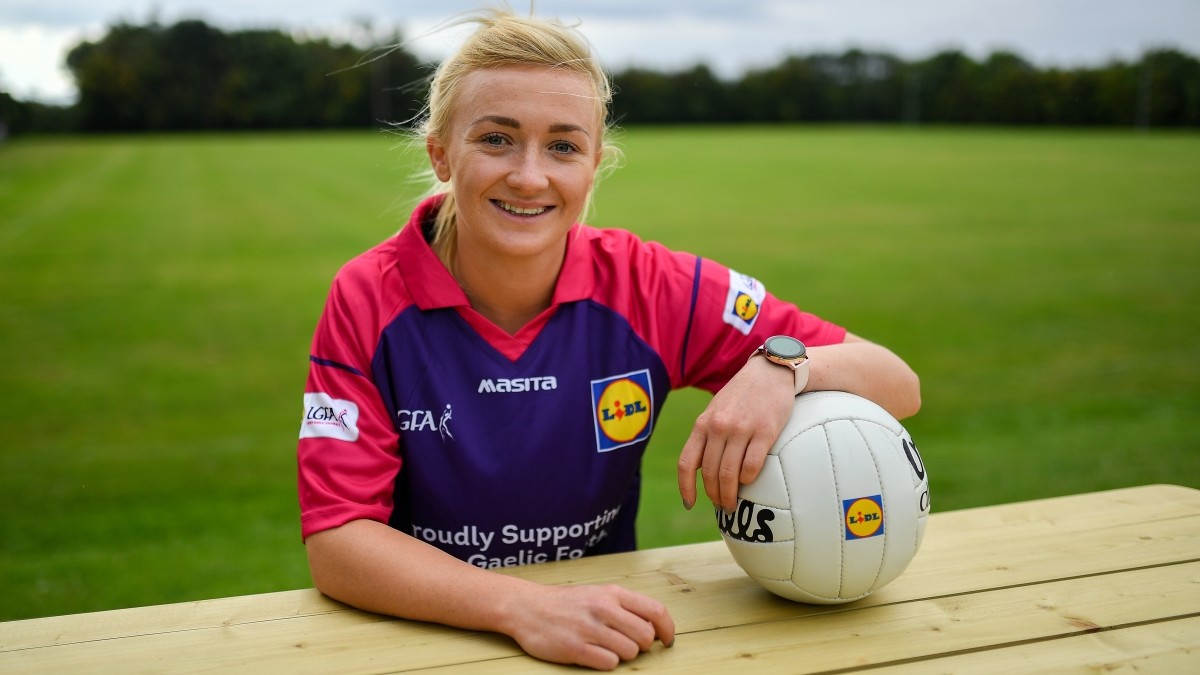 By DARAGH SMALL (Lidl ambassador and Dublin footballer, Carla Rowe, poses for a portrait at the announcement of the #SeriousSupport Schools Programme at Portmarnock Community School in Portmarnock, Dublin. Proudly supported by the LGFA and delivered by the Youth Sport Trust, the programme aims to decrease the dropout rates among teenage girls through athlete mentor led workshops and training sessions in schools across the country. Nominate your school by Sunday, October 10th at lidl.ie/serioussupport. Photo by Brendan Moran/Sportsfile)

Dublin forward Carla Rowe remains hopeful that Mick Bohan – who she describes as ‘the best manager in the country’ – will stick with the Sky Blues for a sixth campaign.

Dublin’s hopes of five-in-a-row were derailed earlier this month when Meath beat them 1-11 to 0-12 in a gripping TG4 All-Ireland Senior Championship Final.

After the game, an emotional Bohan suggested that defeat was the ‘end of the road’ for a number of his players, while he didn’t clarify his future with the county.

But Rowe (26), who has started all eight of the All-Ireland Finals since 2014, believes Bohan should stay on to help Dublin bounce back next year.

“Mick is very genuine and that came across in the interviews and it was the exact same in the dressing room with the girls,” said Rowe.

“We have made so many memories and battled hard together. Losing the Final was a difficult one for players and management. The whole dressing room was quite emotional.

“I would be hopeful that he will stay. That one is always a conversation that happens a little while after the All-Ireland, between him and the county board.

“He wouldn’t have liked to leave a stone unturned, and he never does. That one will hurt, so I would be hopeful that he will come back and we will go again and correct some of the things that went wrong.

“He is the best manager in the country, in the Ladies game certainly. It would be great to have him back and we would be really, really hoping that he will come back.”

Six of the players who started the September 5 loss to Meath were also in the starting 15 when Dublin lost the decider back in 2014.

Of that cohort, Sinéad Aherne is 34, Siobhán McGrath is 32, while Lyndsey Davey and Sinéad Goldrick are 31.

“You would have a few girls who it’s well known are after giving so many years to Dublin,” said Rowe.

“We haven’t got any confirmation of any retirements because you have the few days after the Final with the group, then you go off and chat again in a couple of weeks.

“I haven’t heard anything confirmed but I wouldn’t be surprised if there were a few retirements. But this year we have done really, really well in developing young players so there are girls that can fill those spots.”

Rowe scored a point in the narrow loss against Meath but she still hasn’t seen the Final and says it will take another couple of weeks before the group get together and watch the footage.

“For me, it’s probably just a bit of shock, not the shock of being beaten by Meath, but the shock of a win being taken away after four years of being successful.

“It’s a hard one to even put words on now. I haven’t even fully digested it. I can’t bring myself to watch the match yet. But I will do that soon and start learning from it.

“It’s just strange. We did experience that losing for three years in a row and then to be able to bring that hurt into the last four years has been a huge thing for us.

“This year was a bit of a different one. I am a bit older and I know how hard it is to come across All-Irelands. Even achieving something like four-in-a-row is a once in a lifetime opportunity.

“I am already nearly gunning for the challenge of next year, even though we are only two weeks out but that is what defeat does.”

Clann Mhuire star Rowe is a Lidl Ambassador and she speaking at the launch of the Lidl #SeriousSupport Schools Programme, back once again after being put on hold in the 2021-2021 school year due to Covid-19.

The #SeriousSupport Schools Programme aims to reduce the drop-out rate in sport participation amongst girls in their junior cert cycle through workshops and training sessions led by current or former inter-county players working as athlete mentors in secondary schools across the country.

Rowe is a Science and Biology Teacher at O’Fiaich College in Dundalk and she knows first-hand how important it is to keep young girls involved in sport.

“At that age group, the option is to slip away. It’s nearly easier to slip away than it is to stick with it. With Covid-19, it made some girls face that problem before they were actually thinking about it.

“Covid-19 was a challenge for everyone, especially mental health wise. Sport and exercise is something that really helps with your mental health.

“It is hugely important getting girls back into exercising regularly, enjoying their sport, and using it as a social time.”

* Dublin Footballer and Lidl ambassador, Carla Rowe was speaking at the launch of Lidl’s #SeriousSupport Schools Programme at Portmarnock Community School in Portmarnock, Dublin. Proudly supported by the LGFA and delivered by the Youth Sport Trust, the programme aims to decrease the dropout rates among teenage girls through athlete mentor led workshops and training sessions in secondary schools across the country. Nominate your school by Sunday, October 10th at https://www.lidl.ie/serioussupport.