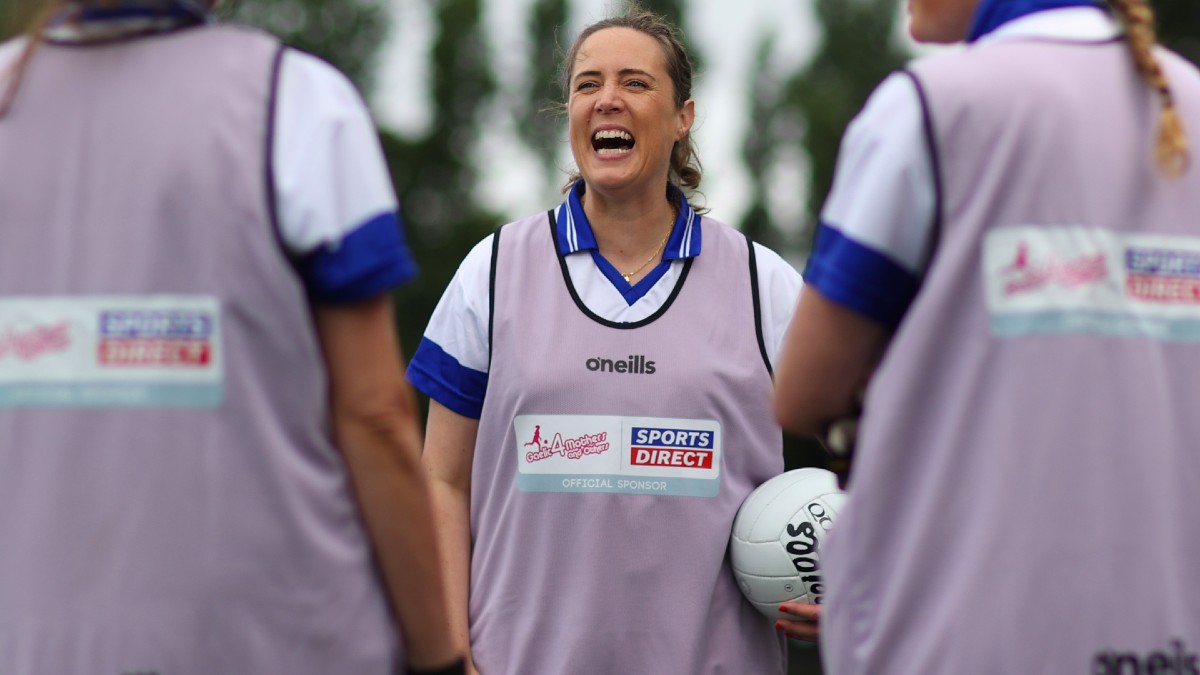 Sports Direct has been unveiled as the new official sponsors of the Ladies Gaelic Football Association’s Gaelic4Mothers&Others programme, in a three-year deal.

Well-known broadcaster, Alison Curtis, was on hand for the launch and will be trying her hand at Ladies Gaelic Football for the very first time in the coming weeks when she joins up with her local Gaelic4Mothers&Others club, St Vincent’s in Dublin.

The Gaelic4Mothers&Others initiative is an innovative way to introduce mothers and other women to Ladies Gaelic Football, in a fun, non-competitive and social environment. The initiative has proven immensely popular since its inception, with 220 clubs from all 32 counties currently involved, with the aim to grow this further throughout 2021.

As proud supporters of grassroots Gaelic Games in Ireland now for a number of years, Sports Direct not only understands the power and positivity of sport and participation, but also the necessity for equal play in our sporting landscape. The brand is committed to mobilising its customers to embrace physical activity in a fun and social way, while ensuring that women have equal opportunities in order to make this current era of sport a fairer and more equal one for all.

The important role that sport and physical activity plays in our lives has been highlighted even more in the past 18 months by its absence, with many women across Ireland unable to reap the mental and physical rewards associated with partaking in physical activity regularly. Sports Direct believes that now, more than ever, is the time to encourage and celebrate female participation in sport, not just for the sport itself, but for the other benefits it brings.

A survey carried out by Sports Direct and the Ladies Gaelic Football Association with over 1,200 Gaelic4Mothers&Others participants ahead of the launch underlined this importance even further, as it found that 90% of respondents felt that the initiative had improved their mental health, while 89% agreed that Gaelic4Mothers&Others had empowered them to be a sporting role model within their family.

Over 40% of respondents said that time was a major barrier to their participation in sport, while one in every five women surveyed stated that confidence was their biggest obstacle to participation. When asked how they had previously spent their time before playing Ladies Gaelic Football with their  Gaelic4Mothers&Others club, just over half of respondents said that they had spent their time putting others’ priorities first. Further insights found that 48% of Gaelic4Mothers&Others players had never played Ladies Football before joining the programme, while 34% had not played in over 10 years, and were returning to the sport after a break. Meanwhile, 87% of participants felt that the programme had helped them to reconnect with friends that they wouldn’t have reconnected with otherwise, truly showcasing what Gaelic4Mothers&Others is all about.

For the announcement, Sports Direct has teamed up with well-known broadcaster, Alison Curtis, who will join her local Gaelic4Mothers&Others club at St. Vincent’s to experience first-hand what a fantastic initiative this is.  Born and raised in Ontario, Canada, Curtis has never previously played Ladies Gaelic Football and will document her new adventure on social media, giving women across the country an insight into the Gaelic4Mothers&Others programme.

Speaking at today’s announcement, Ciara Murray, Group Marketing Manager at Sports Direct said: “At Sports Direct, we firmly believe in the inclusivity of sport. Our involvement in Gaelic Games at a grassroots and inter-county level has shown first-hand just what sport can do for a person, a family or a community. Gaelic Games is not just for the elite, and what makes it so special is the participation of so many people across the country. At an important time for women’s sport in Ireland, we are especially proud to partner with the Ladies Gaelic Football Association and show our support for a brilliant initiative which allows mothers and other women in every single county across Ireland to play Gaelic Football in a welcoming, playful environment. While Gaelic Games provides many sporting role models for children across the country, programmes such as Gaelic4Mothers&Others ensure that there are plenty closer to home.”

Today FM broadcaster and Gaelic4Mothers&Others player, Alison Curtis said: “Since I moved to Ireland, the uniqueness of Gaelic Games is something that has always intrigued me. I’m really excited to begin my journey with St. Vincent’s, and I’m delighted to team up with Sports Direct and showcase what Gaelic4Mothers&Others is all about.”

As part of the new partnership, over the coming months, Sports Direct will show women everywhere that while visibility and role modelling may start at home, with Gaelic 4 Mothers and Others and Sports Direct, role modelling has never been so fun. Sports Direct will release a new video series ‘#MyReasonWhy’ to showcase ambassadors across the four provinces of Ireland who will share their reason why – why they’re involved in Gaelic 4 Mothers & Others, and why it means so much to them.

For more information on the Gaelic4Mothers&Others programme, please visit: https://ladiesgaelic.ie/lgfa-hub/games-development/gaelic4mothersothers/