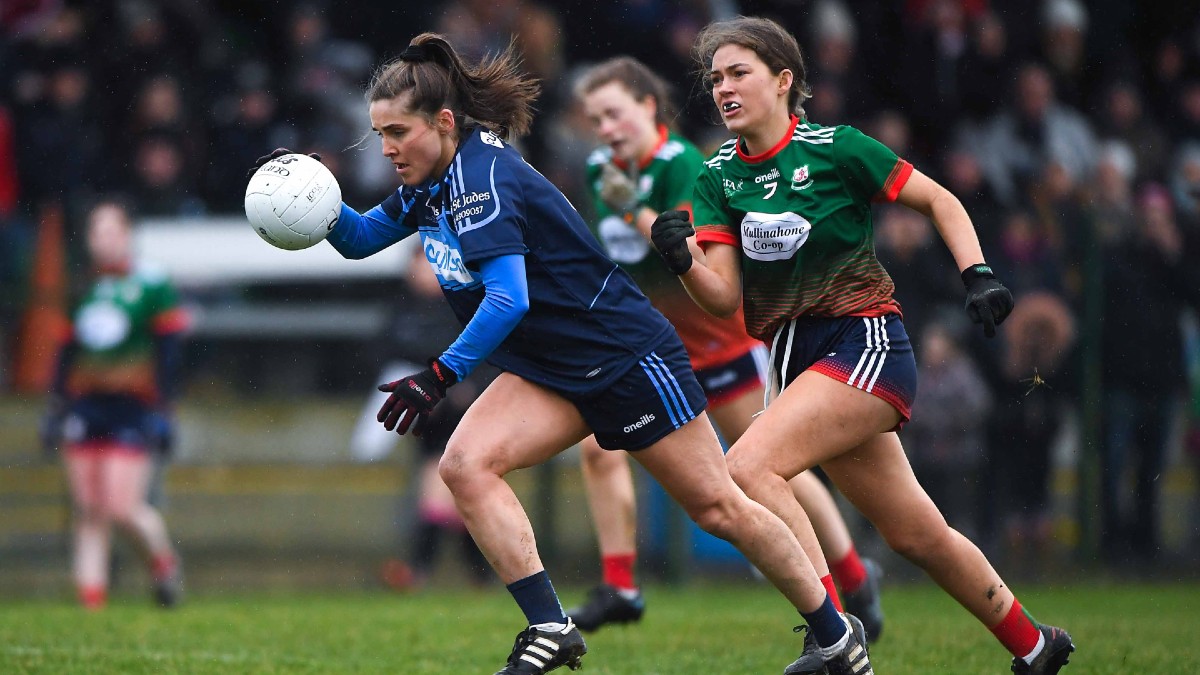 By DARREN KELLY (Hannah Hegarty of CLG Naomh Jude in action against Jennifer Brett of Mullinahone. Photo by Matt Browne/Sportsfile)

Three first half goals from Caoimhe McGrath, Keyes and Aisling Gannon gave Jeff Kane’s charges a 3-4 to 1-4 half-time lead against the elements, and they kept their opponents at bay afterwards to become the first Dublin club since St Maurs in 2016 to win the title.

But it was the Tipperary outfit who got off to a stunning start with a goal after just 28 seconds. Nicole Shelly and Denise Gaule were involved, with the latter finding Aoibhe O’Shea who finished to the net.

Mullinahone were determined to use wind to their advantage and an excellent point from Catherine Foley put them four clear.

And with the O’Shea sisters causing mayhem, Lorraine set up Aoibhe for two more scores to help Mullinahone into a 1-3 to 0-0 lead on 10 minutes.

But gradually St Judes got their running game in gear and the Leinster representatives finally got off the mark in the 13th minute as Hannah Hegarty and Caoimhe McGrath linked before the latter scored the goal.

A free for Ellie Young reduced arrears but when St Judes attacked again through Hegarty and Niamh Kerr, Keyes struck the second goal and made it 2-1 to 1-3 at the water break.

Mullinahone were on the back foot and on 20 minutes St Judes made them pay again with Kerr and Young assisting Aisling Gannon for goal number three.

Kerr and Young added points before Lorraine O’Shea ended a 17-minute drought for Mullinahone leaving them 3-3 to 1-4 in arrears before Young got the final score of the half.

A yellow card for Lisa Morris reduced St Judes to 14 players after the restart but they held par with Mullinahone during the next ten minutes. Hegarty and Young converted against two Lorraine O’Shea scores for Mullinahone.

St Judes applied pressure to the opposing kick outs and reaped the benefits as Claire Gannon and Young made it 3-8 to 1-6.

While the O’Sheas added to their respective tallies, Mullinahone needed a goal that didn’t come. Emma Cody was closed out for one chance while Lorraine O’Shea missed with two efforts.

Young completed St Judes’ tally with her sixth point of the afternoon and they clinched a first ever All-Ireland for the club.

Afterwards, Darren Kelly caught up with the winning St. Judes captain Aoife Keyes, who also remembered Susan Gordon, a coach with the club who passed away recently.

Finally, Darren got the thoughts of Mullinahone manager Paul Kelly