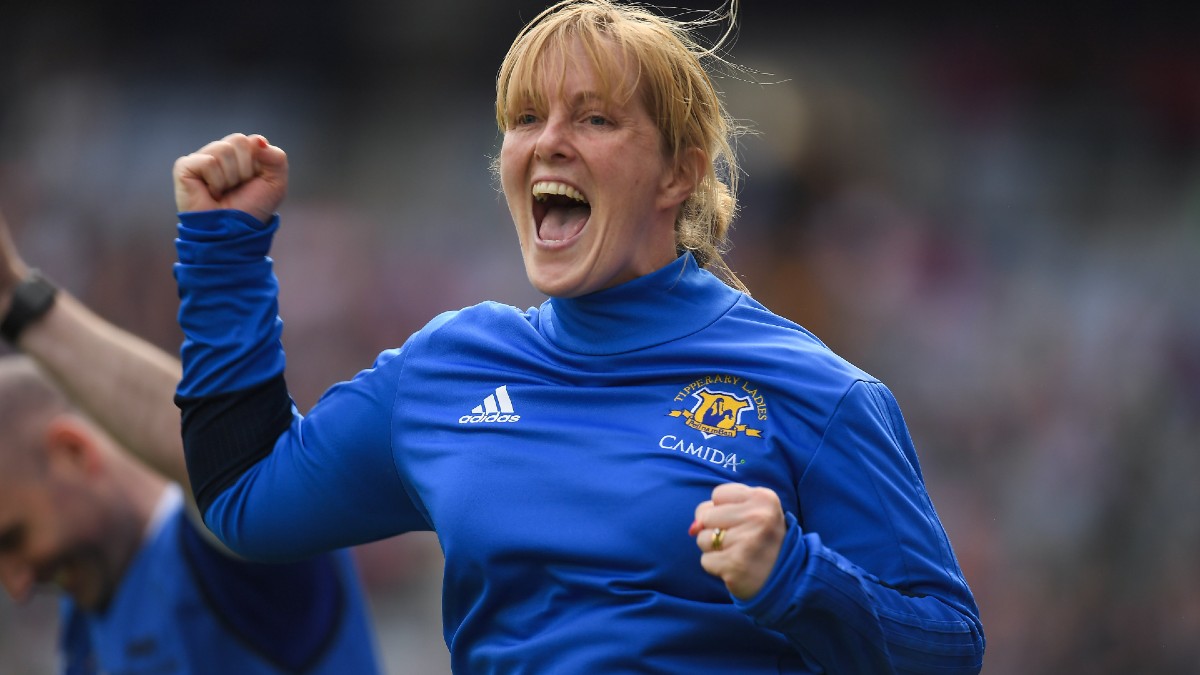 Gavin Bazunu and Caoimhin Kelleher have provided the blueprint and now Elaine Harte wants her Tipperary goalkeepers to follow suit.

The former eight-time All-Ireland winner with Cork has swapped over to the Premier County men’s set-up where she is the new goalkeeping coach and is encouraged by the talent on offer – Evan Comerford, Michael O’Reilly and Kuba Beban.

Harte is a student of goalkeeping and while she draws on some of her past experiences under Kieran O’Dwyer with the Cork ladies, she continues to look for new and innovative ways to improve her goalkeepers.

And the 41-year-old believes the two players battling it out for the Ireland No 1 jersey currently, are the perfect example of the way Gaelic Games goalkeepers should look to build their skillset.

Bazunu is Ireland’s first choice goalkeeper already at just 19 and is turning in impressive displays week-in-week-out for his club, Portsmouth, where he is on loan in League One from Manchester City.

Kelleher, meanwhile, who also hails from Cork, has been a standout performer when given the opportunity for Premier League heavyweights Liverpool in recent times.

But the real difference between these two prospects and what has gone before is their unwavering composure on the ball and their willingness to play out from the back. It is a crucial part of today’s game cross-channel and Harte says it needs to be implemented here too.

“At the end of the day, your goalkeeper is like a quarter-back at this stage,” said Harte.

“It was something that Éamonn Ryan would have always said to me and to the team when we were playing with Cork, a goalkeeper first and foremost has to be a good footballer.

“In this day and age, goalkeepers have to be good footballers and you can’t get away from that fact. Nowadays they are much more involved in the game. I think that’s a really important part.

“The likes of Caoimhin Kelleher and Gavin Bazunu, they are showing it in England, the composure on the ball. That’s the way we have to go now here too. You can’t have a goalkeeper that can’t play football.

“You can see the skill level, they are really good footballers here too. This is the position that they are in. Number one, you are a very good footballer but, number two, you are honing in on the skills that makes them an excellent goalkeeper.”

Harte was an excellent goalkeeper in her day too, one of the best of her generation where she starred in the utterly dominant Cork team of 2000s.

Outside of Dublin’s win in 2010, Cork won every single TG4 All-Ireland Senior Championship between 2005 and 2016. The Moyne Templetuohy clubwoman was part of eight of those triumphs.

It was one of the most decorated careers in the history of the LGFA and Harte was also awarded with an All-Star in 2008 and 2012.

Harte is from White’s Cross in Cork but she moved to Tipperary in 2004, where she lives in Moyne now with her husband, John Doyle, and their six-year-old daughter, Aoibheann.

She is primary school teacher in Moyne and is heavily involved with the local club, while she gradually took more and more of an interest in the Tipperary LGFA too.

Harte was manager when the Tipperary ladies minors were crowned All-Ireland B champions in 2014 before she made the step up to the adult team, where she served as a selector.

And she was she thrilled to get her chance to succeed Clare native Joe Hayes as Tipperary men’s goalkeeping coach for the upcoming season.

“I wouldn’t have done an awful lot of coaching at all with men’s clubs. I would always have focused on the ladies,” said Harte.

“And a lot of my time would have taken up with being club secretary and coaching with the ladies here in Moyne Templetuohy. That’s what I was focusing on over the last few years.

“This will be my first step into the men’s side of things and so far so good. They have been really welcoming. The lads are taking on board everything that I am saying. It’s a really professional set-up and I’m really impressed with it.

“It was a nice honour to get asked, David Power rang me before the Christmas there to see if I was interested. After a little chat with the family here, it was nice to be able to come back to him and say we will give it a go and see how it goes.

This is the latest in a new wave of managers and coaches swapping from the ladies’ game to the men’s.

Shane Ronayne swapped the Tipperary ladies for Waterford in 2021 before he came back over and joined the Cork Ladies again. Former Cork ladies boss Ephie Fitzgerald has subsequently joined the Déise’s men’s team.

However, there are plenty more examples of roles being handed out in the opposite direction and Harte hopes she can help set the trend for equal opportunities.

“There is an awful lot of very good coaches in the ladies setup that are now being looked at in the men’s side of things too,” said Harte.

“It’s seamless really to be honest. If it can go one way, it can go the other way. This is the start of something we can only improve on and get more ladies involved in the men’s side, as well as men involved in the ladies.”