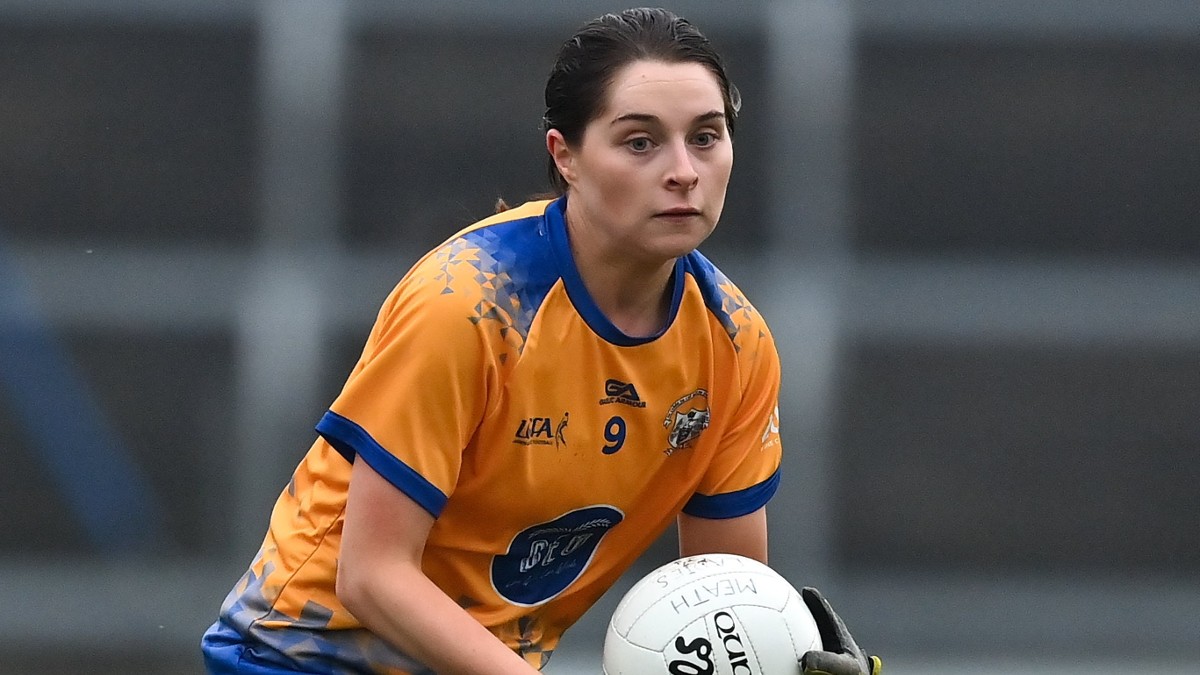 Less than two weeks after giving birth to her first child, Caoimhe Harvey was back on the field, training, and three days later she returned to competitive action.

The Clare star is a competitor by nature but even though she missed a TG4 All-Ireland Intermediate Championship where the Banner reached the final four, before a narrow loss to the eventual champions, she wouldn’t change it for the world.

Many of us will remember 13 August 2022 as one of the hottest days of the year but Caoimhe and her partner, Cormac Murray, will never forget it for different reasons.

“The last month was surreal, so surreal. You can’t even put it into words, imagining it. Rían entered our lives and it was so strange.

“It’s full on but 12 days after having him, I was able to return back to training so that was definitely an experience for myself, to just be able to get going on the football field again.

“Then on Sunday, which would have been 15 days, I got to play 30 minutes of championship football. So that was definitely something I am delighted to be able to be back doing.

“Both of us play football and we wouldn’t be able to do it without the support from either of our families so that is just amazing.”

The 23-year-old who plays with West Clare Gaels was due to captain her county this year before she stepped away from the panel in February.

Harvey was ever-present in the saffron and blue since joining the intermediate panel in 2016 and watching on from the terraces for an entire season was a huge shock to the system.

She made a conscious effort to step away completely and let the new joint-captains Orla Devitt and Niamh O’Dea take up the main leadership roles. It was a difficult call but Harvey needed to separate herself.

“I was at the games but as a supporter, I wasn’t there as a player for the first time,” said Harvey.

“If the girls texted me or rang me I would have picked up the phone, no bother. But not being able to play, I stepped away completely. I needed that time as well to get my head around what was going to come.

“That is what I needed for myself, not being able to play was definitely the toughest part of it all. I wasn’t on the sideline for the girls.

“It was going to be tough for any captain to come in, and it would have been really hard to voice their opinion, having me there as well.

Back on the field, Clare had a poor Lidl National Football League and they were eventually relegated to Division 3 by Tyrone at Glennon Brothers Pearse Park in April.

However, their season ignited when the TG4 All-Ireland Intermediate Championship rolled around, especially after they got back to winning ways in Connacht.

The momentum built and Evan Talty’s side found themselves in a semi-final before Laois beat them 2-21 to 2-19 in a thrilling clash at Kiltoom.

“League didn’t go to plan a whole pile but we had a great Connacht championship and won all our games there,” said Harvey.

“Then the All-Ireland series went quite well and against Laois then, for 60 minutes of the game we were probably the better team. We fought for every ball and we worked extremely hard.

“Overall, there was huge positives which is always a good thing at the end of the year. You always have to look at the positive side of things, which is great.”

Talty vacated the Clare hot seat but they can plan ahead for 2023 looking to build on a positive summer.

Harvey will continue to plot her own return to fitness, and the scintillating form that saw her become one of the best players in the county.

Getting a half-an-hour under her belt against Burren Gaels recently will do her the world of good, even though she knows it will take time to replenish her fitness levels and the hand-eye coordination of a top inter-county footballer.

“We’ll take it day-by-day. We’ll just see what the next couple of months brings for Clare Ladies. We won’t rush into any decision. Definitely looking forward to it but we will just take it slowly and see what happens,” said Harvey.

But one message is clear, she wants other mothers to know that if their health allows it, they can also be out exercising and even playing sports competitively within a few weeks of giving birth.

“The one thing that I noticed is you think your legs can move and then you realise they don’t go as quick as they used to,” said Harvey.

“It’s just now getting into the mentality that you’re back trying to get a championship pace of football. So you just need to realise what the body is able for. Just start working, you are starting off literally nearly pre-season and working your way through again. So yeah, definitely it’s just my legs weren’t going as quick as I thought they could.

“I suppose I didn’t think too far ahead either. We always knew club championship was going to be August, September, October. I kind of said to myself, if I am back in eight or nine weeks I will take that and take anyone’s hand off for it.

“Then when I was feeling okay and feeling myself, I said I will try training and see how it goes. Even your handling is that bit poorer. While I was pregnant I just didn’t think that far ahead of what shape I will be in after having Rían.

“I just said I will take it day-by-day. It was a dose of reality but there is plenty of time and I won’t panic just yet.”