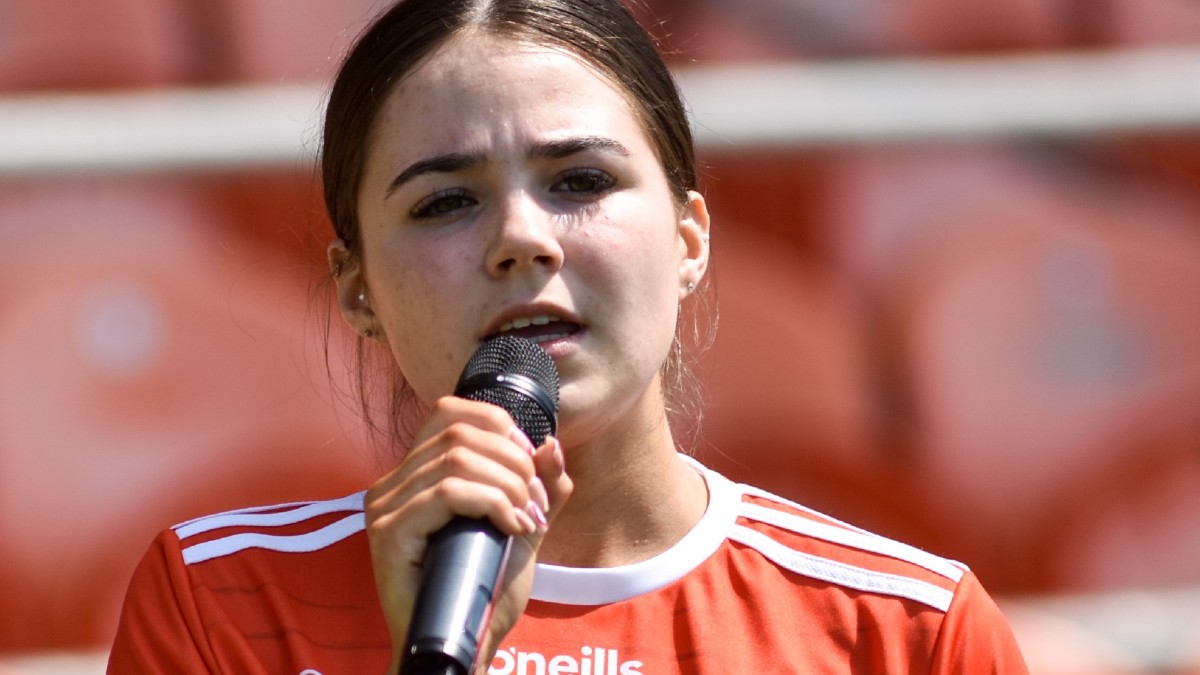 It was the most difficult of decisions but Emily Druse had her sights set firmly on the bigger prize — her education had to come first and her Armagh debut would have to wait.

Armagh manager Ronan Murphy knew she was doing the right thing too but he still had to ask; her future was destined for orange and white even if she chose to put her studies first on this occasion.

She didn’t make her debut when she eventually wore the Armagh senior colours for the first time — the weekend of her 18th birthday — but she still made an impact, singing the national anthem prior to a league clash against neighbours Monaghan on a day when she was an unused substitute.

She made her debut shortly after and is destined for a long career with Armagh, while off the pitch her dedication to her education has been rewarded with the opportunity to study medicine.

“I was called up to the county at the start of the season but I was prioritising schoolwork. I knew I had to put in a lot of work to get into medicine in Queen’s,” said Druse.

“But it came up to the summer and the exams were done so I joined up then. Then the manager texted me and asked me if I would mind singing the anthem. I’m not sure how he heard that I was into music but I knew it was a good opportunity and I didn’t mind doing it.

“It was very difficult to try and put it out of my mind. It was my birthday that weekend. There weren’t many celebrations because the game was the priority. You have to take that into account and respect that. That is just the life of a footballer or an athlete. My birthday took a back seat.

“But it all added to the nerves. It was a big deal as it was my first time togging out for Armagh seniors too and that had always been a dream of mine. So, it added extra pressure on top of it.

“There was definitely very little sleep the night before but it was a great opportunity. I loved doing it. I would do it again if I was asked.”

The Armagh Harps forward is supremely talented in all facets of her life, she recently achieved her Grade 8 status in piano, meaning she can teach that too.

She obviously has the singing voice as well while her top level school grades earned her a place at Queen’s University after a long year of studying.

And that was justification for her hard work and the decision to delay her chances with Armagh in order to secure her future off the field first.

“I felt like it was all worth it when I got the results,” said Druse.

“But there was a fear in the back of my head saying I had missed the opportunity, I have a few clubmates on the county panel and I love playing with them.

“Kelly Mallon is the captain of the county. She had mentioned Ronan wanted to get in touch. I had a chat with him and basically explained my situation and he was so understanding.

“He has daughters as well and he knew why I was turning it down. Then I just said I would be really interested in joining once I got my exams done and out of the way. I didn’t want to commit until I could fully commit. I didn’t want to be missing training sessions and stuff. He actually appreciated the honesty and said; ‘Emily when you are ready and you think you can give us the time, we would be more than happy to have you.’

“So I have absolutely loved it, it has brought me on so much. Even since May time, when I joined, it has changed me so much as a footballer.”

Druse was always a multi-tasker but things have taken on a whole new level since she left for Belfast, where she plays her colleges football with Queen’s University now too.

She was always likely to wear Armagh colours having come from a football-mad household, where her mother Anita laid the foundations.

She also played for the Orchard County while dad, Steven, was Armagh Harps through and through, although his side of the family added a dash of musical talent also.

Emily, who has two younger sisters Elsie and Eva, has flourished in amateur dramatics giving performances at Armagh’s MarketPlace Theatre over the years.

In football she helped her school, St Catherine’s, to an unprecedented All-Ireland U-16 A crown two years ago.
Before that she had already signalled her intent at inter-county level, where she had captained the Armagh U-14s to a provincial title.

She subsequently joined her club’s senior setup, and was awarded Player of the Match when their minors were crowned Armagh winners for the first time in 2019.

Druse has been a leading figure for Armagh Harps during their recent dominance of the county’s club scene and it inevitably led to a call-up that she originally turned down.

But it was fitting that she made her Ulster championship debut for Armagh replacing one of her idols, Caroline O’Hanlon, against Monaghan earlier this year. O’Hanlon is one of Armagh’s greats – a player who made her county debut before Druse was even born.

“I remember that because Caroline came off,” said Druse.

“I had looked up to her for so long, especially because she is a doctor. She is someone I would love to follow in the footsteps of. To replace her on the field in my first game was a privilege.

“It was hard to get in contact with her before because we weren’t with the same club or anything but once I started going to training and stuff, I was chatting to her about the university application process and all.

“It’s essential to have those sorts of people to talk to with experience like that.”

Druse has her sights set firmly on her medical career now, with four-and-a-half years remaining in her course at Queen’s.

She is excited by the prospect of working on the Emergency Department, rather than as a GP.

But her footballing career still has plenty of intrigue around the corner while her last appearance came against the mighty Meath in the TG4 All-Ireland Senior Championship quarter-final.

Ironically, she came onto the field as a substitute for Fionnuala McKenna in her 100th start for the county.

McKenna is the captain of Armagh Harps and coached the minor team that Druse led to glory. She used to teach Druse at St Catherine’s and they are both former Head Girls at the school too.

“She has always been an inspiration for me,” said Druse.

“She teaches my wee sisters and everything and I have always had a big connection with Fionnuala.

“She is just so inspiring in the club. She really takes us young ones under her wing. When I started playing senior club I was about 14. It was extremely daunting coming up but she was so welcoming and encouraged me.

“What I love about the Harps senior panel is no matter what age you are, everyone is treated the same, there is no, I am not passing her the ball because she has only started on the panel, it was extremely inclusive.

“Fionnuala really drove that, the captain.”