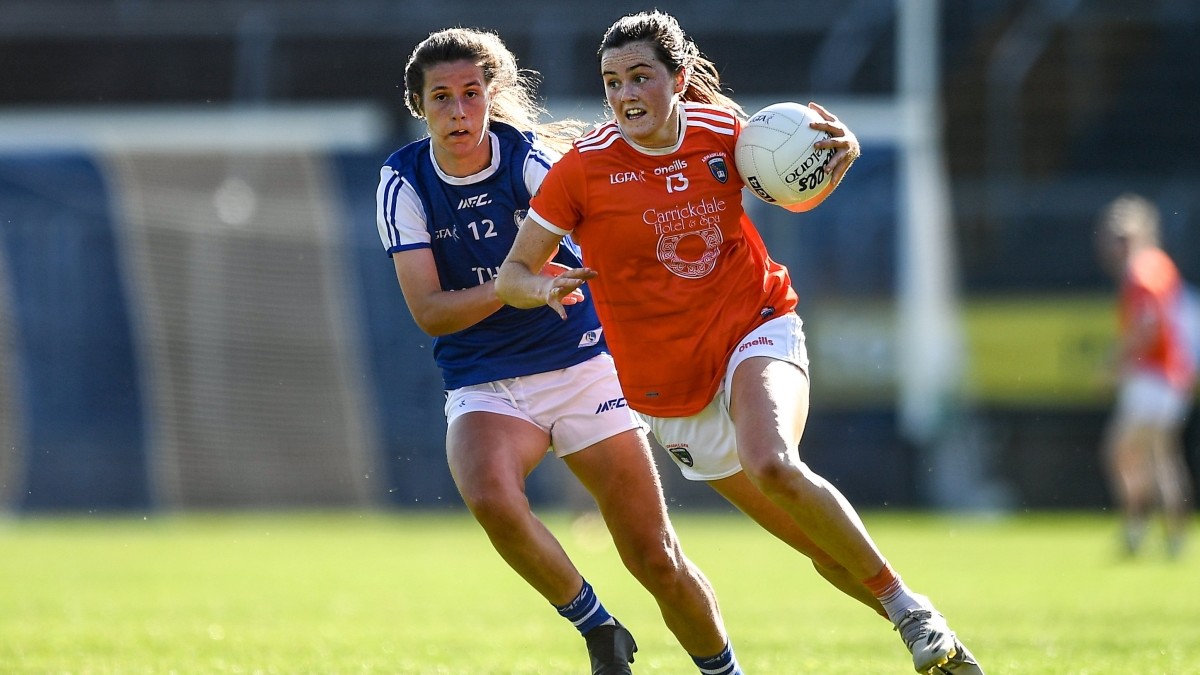 By John Fallon (Aimee Mackin of Armagh in action against Ciara Finnegan of Cavan during the TG4 All-Ireland Senior Ladies Football Championship Group 2 Round 2 match between Armagh and Cavan at St Tiernach’s Park in Monaghan. Photo by Ben McShane/Sportsfile)

Reigning champions Dublin and last year’s beaten finalists Cork booked their places in the TG4 All-Ireland Senior Championship quarter-finals after they registered 12 goals between them at the weekend.

Mayo, Galway and Armagh also advanced to the final eight of this year’s competition with Waterford, Tipperary and Donegal all still in contention despite their Saturday defeats.

Mick Bohan’s Dublin made it back-to-back wins with a big 6-12 to 1-10 victory over Waterford at Baltinglass.

Dublin were 2-5 to 1-4 ahead at half-time and with a couple of goals from Caoimhe O’Connor, along with strikes from Carla Rowe, Siobhan Killeen, Niamh Hetherton and Jennifer Dunne, the holders were far too strong.

The 11-time winners, Cork also scored six goals in their 6-14 to 1-10 success against Munster rivals Tipperary at Sean Treacy Park.

Eimear Scally scored 2-5 while Sadhbh O’Leary (two), Áine O’Sullivan and the returning Doireann O’Sullivan were also among the goals.

Shauna Howley scored the winner for Mayo as they required a free-kick shoot-out to beat Monaghan after extra-time had finished level, 0-12 to 0-12.

Mayo could have been in trouble when it was 0-6 to 0-6 at half-time in Ballinamore. Then Aoife McAnespie ensured extra-time when she scored, but Howley shone brightest after extra time couldn’t separate the two sides.

Donegal held a 1-6 to 0-4 half-time lead against Galway in Markievicz Park but a sensational second-half turnaround changed the course of the game and sent Galway through.

Nicola Ward scored right after the resumption and then half time substitute Ailish Morrissey popped up with two more goals in quick succession, with a 3-10 to 1-11 win for Galway following.

In the last game on Saturday evening Armagh advanced after a brilliant 3-18 to 3-10 victory over Cavan at St Tiernach’s Park in Clones.

Aimee Mackin scored 0-10 but the goals from Kelly Mallon, Caroline O’Hanlon and Aoife McCoy were decisive in the Ulster derby.

Meanwhile, in Sunday’s TG4 Intermediate Championship action, Leitrim and Down became the first teams to qualify for the quarter-final stage after their respective wins over Clare and Louth in today’s action

Two goals from Michelle Guckian turned the game in Leitrim’s favour during the second half, which helped them to their second win of Group 2 on a 4-7 to 2-9 scoreline.

In Group 4, an early goal from Aisling Cull got Down off to a flying start, and despite going 20 minutes without a score either side of half time the Ulster side ran out 1-6 to 0-7 winners and progress to the knock-out stages. Louth and Offaly will fight it out next week for second place.

In Group 1, Wexford picked up their second win of the competition, but despite winning by 0-7 to 0-6 after Caitriona Murray’s late free, they are still not guaranteed a place in the last eight. Wexford will play Westmeath next weekend, and after the midlanders’ 2-12 to 2-10 victory over Sligo they will be eager to continuing their winning form. Longford are also in with a chance of making it to the next round, but they need to beat Sligo next weekend to retain their hopes.

And in Group 3, two goals each from Sarah-Anne Fitzgerald and Mo Nerney gave Laois a 4-11 to 2-15 victory over Kildare. Laois will play Roscommon in the final game of the group next week, with both slots in the quarter finals still up for grabs.

In the TG4 Junior Championship, Antrim needed extra time to claim their first win, but they were stylish 5-20 to 2-13 victors over Carlow. And in the second game Nicole Bennett’s late penalty was key as Limerick emerged 2-7 to 0-12 winners against Derry.