FOOTBALL: ‘The first football game I came back, I kicked five wides. I didn’t mind kicking them though because I was able to play.’ – Offaly’s Mairéad Daly 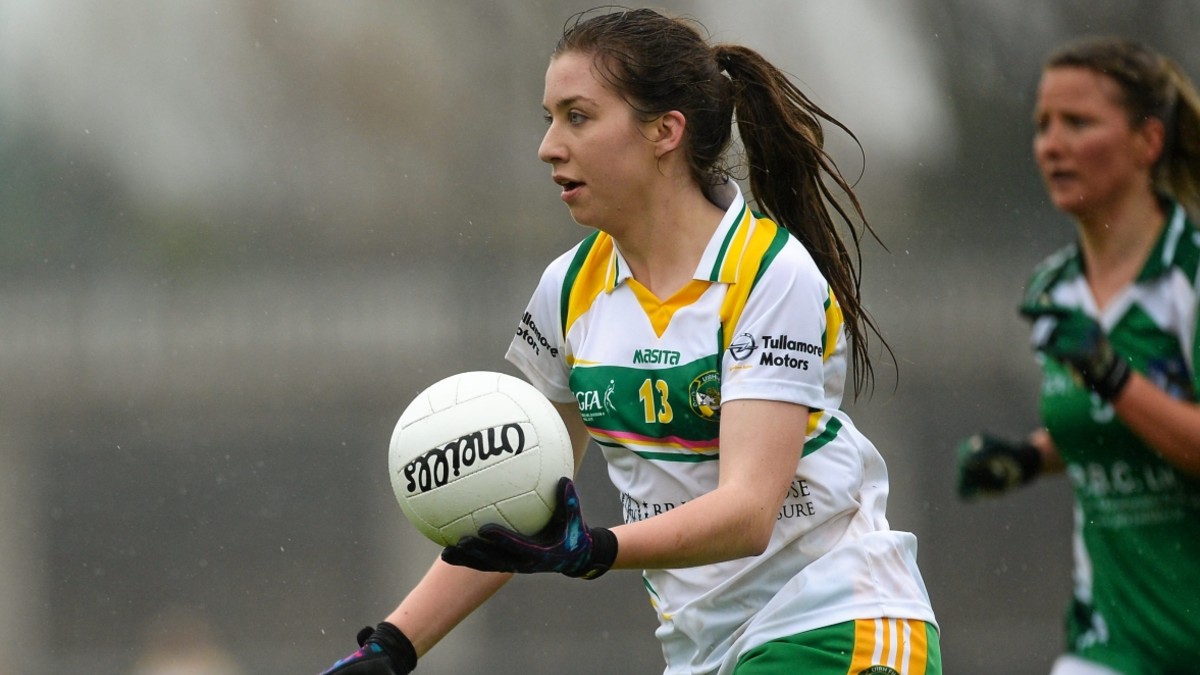 It’s more than two years since Mairéad Daly pulled on the Offaly shirt, but with a second ACL recovery behind her, the St Rynagh’s forward is aiming to inspire a revival in the county’s football fortunes.

Her last time to feature for the Faithful County came in the snow of Storm Freya in 2019, a match against Kildare that was abandoned due to the brutal conditions. Since then, her father, Garry, has taken change of the county team, but she missed out on so much during her recuperation.

The dual club player sat out all of Offaly’s League and Championship action in 2020, while she also watched on as her St Rynagh’s teammates ran out in Croke Park for the All-Ireland Camogie Intermediate Final.

The 2013 All-Ireland Junior football winner tip-toed back into club action last winter and played her part as the camogie team ran out Senior champions in Offaly, while the club footballers won the county Intermediate title.

After proving her fitness to herself, she’s back in the county panel, and those frustrations have been replaced with a childish excitement.

“I’d say Daddy is getting thick with me because all I’ve been doing is messing at training. I’m just so happy to be there,” said 25-year-old Daly, who is planning her return against Carlow on 23 May.

“Everyone seems so focused this year. I don’t know what it is. Maybe it’s the same with every team because of Covid, but it’s great to be involved.

“The first football game I came back, I kicked five wides. I didn’t mind kicking them though because I was able to play. It got a bit more serious every night after that.

“There is just pure joy when you play now. Obviously I want to win all the time but it’s a different mindset now, you just enjoy it a bit more, you’re a bit freer when you play and a bit less stressed. I’m just delighted to be back.”

Recent weeks have certainly aided Daly’s mood. Employed as a Games Promotion Officer with Edenderry GAA club, she is tasked with spreading the word of Gaelic Games to five primary schools in the town. Zoom classes with the students have been replaced by face-to-face interactions, a timely boost for all involved.

“My work is Gaelic Games and I play camogie and football, so when Covid came and lockdown happened, everything halted for me. I went from being out every day and evening, to sitting at home all day, every day on the laptop.

“It was very different, getting on Zoom was great with them, just to see the kids again and touch base with them and keep in contact with them and the teachers, it made it a lot easier when we came back.”

Daly’s first knee trouble appeared playing a Freshers blitz at Waterford IT back in 2013 when she ruptured her left anterior cruciate ligament. That perishing day against Kildare in 2019 saw some aches and pains resurface, and after taking a few months away from the game to let things settle, the then county captain ruptured her right ACL in her first training session back.

“The first time it happened was a contact injury, a girl ran into me and it was just gone. This one was a lot scarier because it was non-contact. I think that took an extra toll, this time it was a lot tougher mentally.

“This time I said: ‘I’m never playing sport again; that’s it, I’m finished’. It’s such a long road. At the start I knew I’d have to do that jumping test nine months later and I thought there’d be no way I could do that.

“When you’ve gone through it all before, you know exactly all the steps ahead of you and that’s daunting. Then you just ease your way back in, and then you think ‘aah, I will go back, I want to play’. But I had a really good support system around me this time, which made it a lot easier.

“While it was harder this time, I was a lot stronger to be able to deal with it. I don’t think I missed one day of recovery, whether it was strength and conditioning or running, I didn’t miss one day.”

With work and play both side-lined due to injury and the Covid outbreak, all of a sudden Daly had plenty of free time to fill. Instead of resting up, she decided to come on board coaching her Offaly Ladies teammates.

“There is always a silver lining. Seeing that side of it, how things work behind the scenes was really brilliant. One of the boys, Jack Tierney, was in coaching and he asked if I’d go in and help. It was a nice way to stay in contact and be in the set-up.

“We designed the sessions together, Jack did most of the work, I just took a few drills here and there and we worked on a few things we thought we could improve on. I absolutely loved it, it gave me a huge insight into Offaly Ladies, things I have been able to bring into this season as well.”

There was no holding Daly back in the last two weeks since training resumed, but it’s not just ball work that the Offaly players have been doing. Offaly LGFA is regenerating Bretland Park in Clara with the view to purchasing it as a training ground for their county teams, and everyone has been called to arms.

“We were there picking stones last week trying to get the pitch ready for reseeding. That’s our team bonding at the moment.

“At the moment we are renting it, but we are doing it up, reseeding the pitch, getting lights in. The end goal is to be able to buy it and we are trying to raise some money for that.

“With the GAA owning all the pitches, it’s harder for us to get in. It will be another while, maybe a year I’d say, before it is properly opened. But we are definitely on the right track.

“And it’s a huge step for us. If we had our own training ground, everyone would know where they are training every night of the week, and for us that will be absolutely unreal.”