FOOTBALL: “The pressure is off us now” – Curran 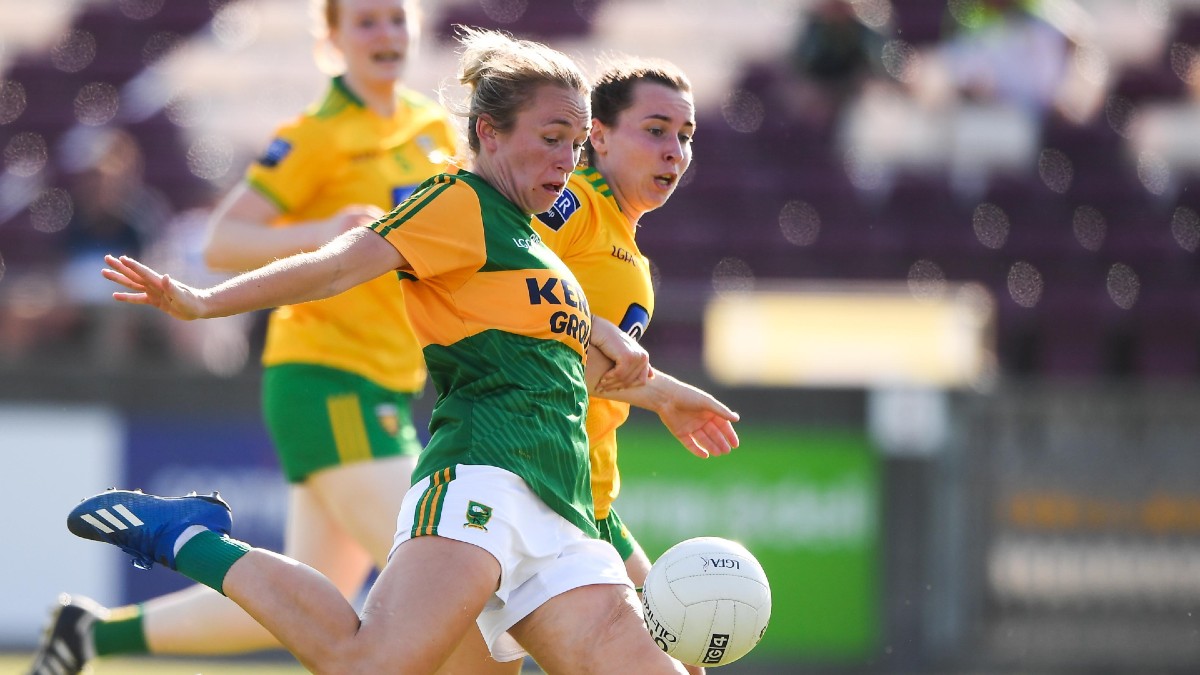 By DARAGH SMALL (Niamh Carmody of Kerry shoots to score her side’s second goal during the TG4 All-Ireland Senior Ladies Football Championship Group 4 Round 3 match between Donegal and Kerry at Tuam Stadium in Galway. Photo by Matt Browne/Sportsfile)

Donegal manager Maxi Curran says his team can give reigning champions Dublin plenty to think about as they prepare to do battle in the TG4 All-Ireland Senior Championship quarter-finals next weekend.

Donegal claimed their place in the final eight thanks to a hard-fought 2-13 to 2-9 win over Kerry in scorching conditions at Tuam Stadium on Saturday evening.

Goals from Geraldine McLaughlin and Katy Herron ensured Curran’s side finished runners-up in Group 4, setting up a tough clash with the five-in-a-row chasing Dubs.

“The pressure is off us now, our target was to get out of the group and we knew Dublin was on our side of the draw,” said Curran.

“A quarter-final is probably as good of a day as any to get them because they haven’t played any of the big guns, so they’re probably trying to find their feet.

“We have given them as much bother as anyone else over the years, so they’ll know they’re up for a battle as well.”

As a result, Kerry were dumped into the relegation play-offs where they will face off against Tipperary on the weekend of August 21/22. The winner of that tie will be safe.

Last year’s runners-up Cork learned their fate on Saturday too and they will take on Waterford in a local derby quarter-final.

Waterford booked their placed in the final eight thanks to an impressive 3-16 to 0-12 win over Tyrone at St Loman’s in Mullingar. Katie Murray scored two goals for the Deise.

Their manager Ciaran Curran was thrilled with Waterford’s performance ahead of a huge game against Cork.

“We have huge respect for Tyrone, we know the tradition and the team that they have, and for us to get the victory was vitally important to progress in the championship and now we have to prepare for the quarter final against Cork which will be another tough challenge.”

On Friday evening Meath set up a quarter-final tie with the winners of Armagh and Mayo, after Vikki Wall’s goal set them on their way to 1-18 to 0-7 victory over Tipperary at O’Moore Park in Portlaoise.

“I’m delighted that we have retained our senior status. That was our main goal and now everything else is bonus territory, so we’ll see where this journey takes us next,” said Meath manager Eamonn Murray.

And on Saturday, Aimee Mackin scored 3-6 to make sure it was Armagh who advanced to face Meath. They were comprehensive 3-14 to 0-12 winners against Mayo at Ballinamore.

“Everyone has a job to do, and it is up to everyone to do that job to the best of their ability. For me next week’s game with Meath is our next big challenge,” said Armagh manager Ronan Murphy.

Armagh’s victory means Mayo will now take on Galway in another quarter-final derby while in the second relegation play-off Cavan will meet Tyrone.

Monaghan manager Ciaran Murphy was delighted with his side’s sensational comeback against Cavan as Ciara McAnespie fired a 65th minute goal to secure their senior status for the 30th year in a row. It finished 1-13 to 0-14 in Monaghan’s favour at Breffni Park on Saturday.

“That was heart-stopping stuff, showed our battling qualities, fantastic for us. You know Ciara can do that, her composure in front of goal to go around the ‘keeper and stick it away,” said Murphy.

On Sunday, the Intermediate Championship quarter-finalists were decided as Westmeath are set to play Clare, Leitrim will clash with Kildare, Laois face Louth, and Down play Wexford in the last eight, following the conclusion of the group stages.

Longford and Roscommon will do battle in the relegation play-offs with Fermanagh against Offaly for the right to play Intermediate Championship football again next year.

And in the Junior Championship there were victories for Antrim and Wicklow over Limerick and Carlow respectively.