FOOTBALL: “They played it for themselves, and they made no mistake” – Declan Carr 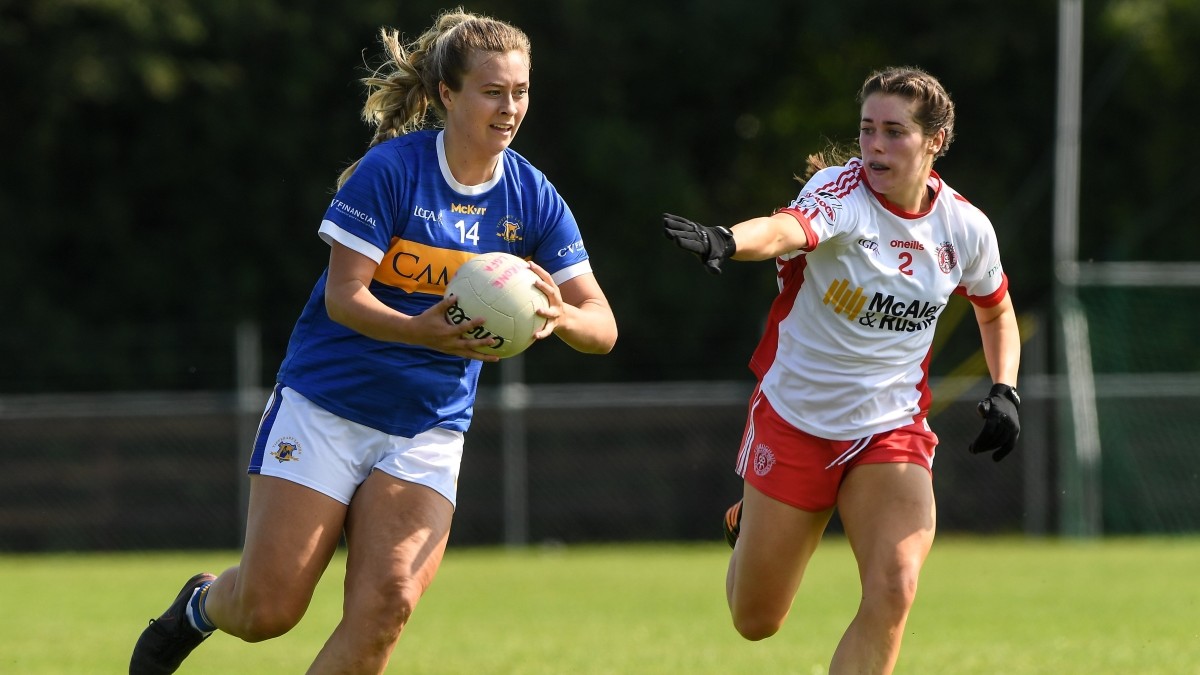 By JOHN FALLON (Marie Creedon of Tipperary in action against Megan Kerr of Tyrone during the TG4 All-Ireland Ladies SFC relegation play-off match between Tipperary and Tyrone at Coralstown Kinnegad GAA Club in Kinnegad, Westmeath. Photo by Matt Browne/Sportsfile)

Former All-Ireland hurling winning captain Declan Carr said that keeping Tipperary in the senior grade of the TG4 All-Ireland Senior Football Championship with a 7-10 to 3-16 win over Tyrone in a relegation play-off was right up there with some of his best days in sport.

Carr, who took charge of the Tipperary ladies team this year, had already suffered one relegation this season when they were demoted from Division One of the Lidl National Football League.

The 1991 Liam MacCarthy Cup winning captain said Tipperary were determined to hold on to their senior status for 2022 and two goals from Marie Creedon and one apiece from Áine Delaney, Roisin Daly and Aisling McCarthy helped them lead by eight points at the break in Kinnegad.

Further goals from Daly and Angela McGuigan sealed the win for Tipperary, although Tyrone battled to the end thanks to goals from Niamh O’Neill, Nichola Rafferty and Grainne Rafferty.

“For me, and all my years of involvement in a lot of things, I would say that this game is really rating high, in terms of satisfaction and a belief that you would have had all year in the girls has just come true. They played it for themselves, and they made no mistake,” said Carr.

“A bad day for Tyrone, I sympathise with them, they’re not nice games to play in, it’s not nice competition but I suppose everybody cannot stay up all of the time. But Tipp has had their fair share of down there in intermediate, so I do wish Tyrone the best, I do sincerely.

“I think the biggest difference was that we agreed after the Kerry game that we would play no more nervous football. We wouldn’t get uptight about it, it will be what it will be and if we could have courage and be fearless, you know the result will be the result. And I think they just went for it. They decided from the get-go there was no hesitancy in what they were about and they kept going for it. You could have looked at it and said are they going to keep up this level of intensity but they did and they kept coming and kept coming. For me, the biggest difference was they played with abandon and they really gave it a lash.”

Meanwhile, Longford maintained their intermediate status with a 0-9 to 0-8 win over Fermanagh with Michelle Farrell leading the way with four points, but it took a point-blank save in the dying moments from goalkeeper Rian McGrath to deny Joanne Doonan.

The focus now switches to the triple TG4 All-Ireland finals at Croke Park next Sunday. Antrim will meet Wicklow in the junior final at 11.45am, followed by Westmeath and Wexford in the intermediate decider at 1.45pm, and then Meath will bid to end Dublin’s hopes of a fifth All-Ireland title in a row when they clash in the senior showdown at 4.15pm. All three finals will be televised live by TG4.