FOOTBALL: “They’re massively pleased from the point of view of just controlling the game” – Mick Bohan 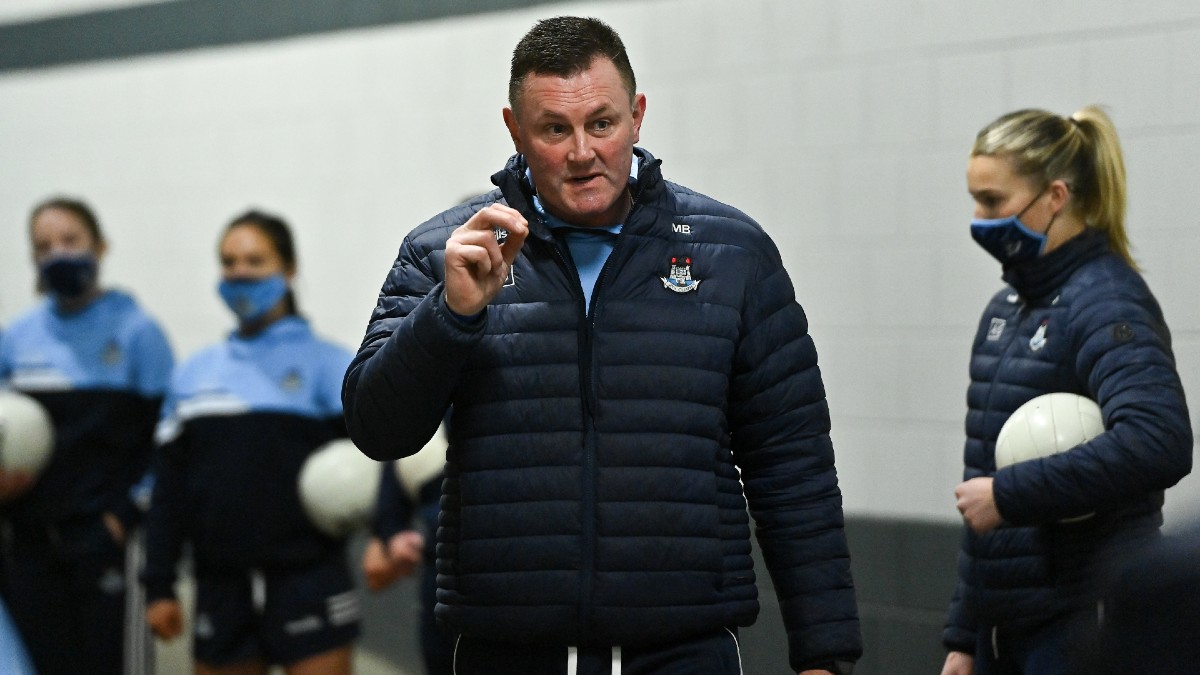 (Dublin manager Mick Bohan speaks to his players ahead of the TG4 All-Ireland Senior Ladies Football Championship Final match between Cork and Dublin at Croke Park in Dublin. Photo by Piaras Ó Mídheach/Sportsfile)

Dublin Ladies football manager Mick Bohan praised his side’s powerful second-half display as they worked their way to a fourth TG4 All-Ireland Senior Championship in a row in their seventh straight appearance in the Croke Park decider.

Carla Rowe’s penalty early in the second half turned this game in the favour of Dublin, after Cork had gained an early control of the action following Áine Terry O’Sullivan’s third minute goal.

The Munster side edged a low scoring first half and led 1-3 to 0-3, but they could only add two more points to their tally thereafter, as Nicole Owens and Nicole Healy tagged on good points in the closing stages, with Dublin’s second-half dominance in the half-back and midfield sectors key to their comeback.

“Just listening to the players there, they’re massively pleased from the point of view of just controlling the game. They’ve gone through plenty of years where they just weren’t able to manage the game in those types of positions,” said Bohan.

“Realistically, we didn’t play well in the opening quarter. We made loads of mistakes. They came with an intensity and a fervour that really puts the competition up for grabs.

“To wrestle that back off them and I felt we controlled the second half. That was hugely pleasing. Particularly in the season we’ve had, because it’s obviously a much shortened season and there’s a lot of stuff you’d normally get covered that we may not have covered.”

After 12 minutes play Cork looked well in charge, and as well as her early goal Áine Terry O’Sullivan kicked a good point, while Orla Finn also scored from play, Ciara O’Sullivan was particularly dominant in that opening half, while Doireann O’Sullivan proved an excellent target at the edge of the square for her side.

Dublin were very wasteful in that opening period and kicked six wides, including a brilliant goal chance from Healy, while Owens was also denied by a good stop from Martina O’Brien.

After trailing by three at the break, Dublin soon took the lead when an inspirational score from Aoife Kane was followed by Rowe’s penalty in the 35th minute. With Sinead Aherne replaced at half-time, Rowe took the free taking responsibilities too and she pushed them 1-6 to 1-3 clear before Ciara O’Sullivan managed to settle Cork with a good point.

But Dublin continued to dominate and Kate Sullivan, Owens and Healy all weighed in with good points as Dublin reclaimed the Brendan Martin Cup with a show of controlled dominance in the closing stages.

“We were under big pressure and Dublin had their tails up. The penalty gave them a lot of oxygen, a lot more energy,” said Cork manager Ephie Fitzgerald.

“We missed a few chances in the first half. We had a few goal chances and a free at the start of the second half that would have put us four up. The penalty was a turnover from us.

“There’s a whole range of little things, but they got 1-2 or 1-3 without reply which meant we were under pressure then. We lost our shape a little bit, but that’s understandable.

“We felt if we didn’t concede a goal in the first 10 or 12 minutes of the second half, it would have been tit for tat. But that’s just the way it goes. I can’t fault them in fairness.

“We’re still a work in progress; they’re a seasoned, hardened, fantastic football team. The level of conditioning and pace they can play at is very, very high.”