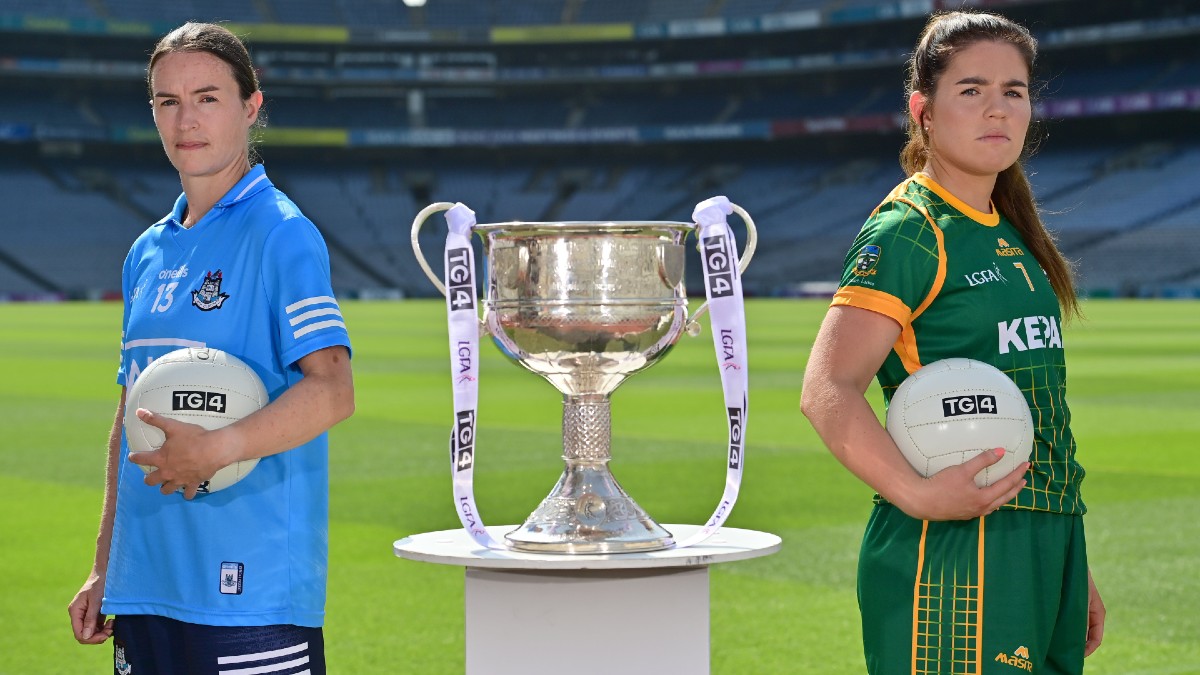 Compiled by Jackie Cahill (In attendance at a photocall at Croke Park in Dublin ahead of the TG4 All-Ireland Junior, Intermediate and Ladies Senior Football Championship Finals on Sunday next are Dublin captain Sinead Aherne, left, and Meath captain Shauna Ennis with the Brendan Martin Cup. Photo by Brendan Moran/Sportsfile)

THE time has almost come to crown the 2021 TG4 All-Ireland Ladies Football champions.

All three Finals are down for decision at Croke Park next Sunday, September 5, with a potential Leinster clean sweep on the cards.

Five Leinster counties will make their way to the famous stadium, with Antrim representing Ulster in the Junior decider against 2020 runners-up Wicklow, a fixture to get proceedings underway at 11.45am.

That’s followed by the Intermediate Final involving last year’s Finalists Westmeath and Wexford at 1.45pm, while the Senior Final between holders Dublin, chasing a fifth straight title, and first-time Senior Finalists Meath has a 4.15pm start.

All three games will be available to view on Sunday on TG4 and worldwide on the TG4 Player: https://www.tg4.ie/sruthtg4/peilnamban.php

Tickets for the games are on sale at: https://am.ticketmaster.com/gaa/lgfagensale

They were favourites and they had form but they were gunned down at Parnell Park by Fermanagh.

That was 2020 and it was a difficult year for sport. When Wicklow looked back on it, they didn’t even have the consolation of an All-Ireland Final appearance at Croke Park.

With the Intermediate and Senior Finals fixed as double-header at Croke Park on December 20, and Covid-19 ruling out the traditional triple-header, Wicklow and Fermanagh pitched up at Parnell Park for a December 5 Junior Final.

The early Christmas cheer went Fermanagh’s way and Wicklow faced into a dark winter of soul-searching and regret.

To their eternal credit, they didn’t shy away from it. Manager Mark Murnaghan stuck around and despite the absence of some players who were mainstays in recent times, Wicklow are back where they want to be.

There will be a fierce motivation within the Wicklow camp to get their hands on the West County Hotel Cup and regain Intermediate status following relegation in 2019.

But, as Meath will testify following All-Ireland Final losses at Intermediate level in 2018 and 2019, you can fall in successive deciders.

It’s a fate that may well befall Wicklow as they’re up against very good opponents this morning in Antrim.

The Saffrons love nothing more than a battle, as evidenced by not one, but two, extra-time victories over Carlow during the 2021 Championship, including at the semi-final stage.

Antrim and Wicklow met in the group stages of the Junior Championship last month and just five points separated the sides.

With Antrim’s tails up following the Carlow win, they’ll start with real confidence but Wicklow were smooth in their semi-final win, 1-12 to 0-4 against Limerick in what could have been a tricky assignment for them.

Antrim will ask them questions, however, and the only county outside of Leinster on show at Croke Park on Sunday have many scoring threats.

At the other end of the pitch, Wicklow have a player who’s aiming to end the day with not only a TG4 All-Ireland Junior medal, but also the ZuCar Golden Boot award as the leading scorer in the 2021 TG4 All-Ireland Championships.

With 0-35, Marie Kealy needs 12 points to move past Carlow’s Clíodhna Ní Shé and into first place.

Clodagh Fox (2-5) and Catherine Dempsey (2-5) have also been doing well for Wicklow, along with recently-married Laurie Ahern (0-8) and Sinead McGettigan (2-2).

To date, no team has managed to lay a glove on them but it is interesting to note that Antrim have come closest.

Wicklow are the team to beat, as they have been since the competition commenced, but Antrim will look to follow in the footsteps of fellow Ulster side Fermanagh by upsetting the formbook.

They lost the 2016 Final to Longford but Antrim were Junior winners in 2012 and 2009, so they do have some recent history.

In manager Emma Kelly, and coach Kyla Trainor (Down), Antrim have players who won All-Ireland medals as players. They’re a team not to be underestimated – and Wicklow will have to play very well to erase those painful pre-Christmas memories.

REDEMPTION day for Westmeath – or Wexford to inflict more Final misery on the Lake County?

All will be revealed at Croke Park on Sunday afternoon as the two counties battle it out for the Mary Quinn Memorial Cup.

The 2021 TG4 All-Ireland Intermediate Final promises to be an intriguing affair, and Westmeath will aim to avoid a second straight Final loss.

In December 2020, they were favourites in many people’s eyes but opponents Meath had lost the previous two Finals and weren’t in the mood for an unwanted hat-trick.

And so it was back to the drawing board for Westmeath, who will surely have noticed Meath’s stunning progress since then and thought ‘if they can, why not us?’

Westmeath might also feel that the old adage ‘you have to lose one to win one’ will ring true but Wexford are dangerous opponents.

Back in June, Wexford were at a low ebb, relegated from Division 2 of the Lidl National League after conceding 11-7 in a play-off defeat to Tyrone.

Lizzy Kent took over the reins shortly after and the county’s fortunes have taken a dramatic upward turn.

Still, only a brave punter would have backed Wexford to make it all the way to Croke Park to contest a TG4 All-Ireland Intermediate Final but here they are – and in sight of a very first title success in this grade.

In 1999 and 2007, Wexford had shots at winning it but fell at the final hurdle on both occasions.

A Junior title was annexed in 2014 but victory would see Wexford, Senior All-Ireland Finalists three times during the 1980s, return to the elite grade of Championship Football.

That’s where Westmeath want to be too, of course, and a win would see them bridge a ten-year gap back to their previous Intermediate title win in 2011.

The stakes are high and if form is anything to go by, Westmeath have the edge.

When the sides met in the group stages in July, Westmeath ran out 2-16 to 1-6 winners but Wexford didn’t let that setback affect them, beating Down in the quarter-finals and a fancied Laois at the semi-final stage to reach Croke Park.

Westmeath have had to battle to get here too, scoring three-point victories over Clare and Kildare in the knockout stages.

Manager Sean Finnegan has attacking players in sensational form, with Sarah Dillon still in with an outside chance of claiming the ZuCar Golden boot award, the prize on offer for the leading scorer in the 2021 TG4 All-Ireland Championships.

Dillon’s collected 4-17 to date while Anna Jones has registered an impressive 2-18.

Indeed, when you combine the tallies of Dillon, Jones, Leona Archibold and Ciara Blundell, you’re looking at a 10-49 total.

That’s fine shooting but Wexford are no slouches either and Catriona Murray is a guaranteed source of scores.

She’s on 2-18 coming into this game, while Amy Wilson has chipped in with 2-10, and skipper Aisling Murphy has contributed 2-3.

Both defences will feel the heat at various stages during this one and the rearguard that copes best will go a long way towards pointing their colleagues towards the steps of the Hogan Stand.

Westmeath will start as favourites but it’s a tag that weighed heavily last year, and Wexford have been a team playing without fear and with freedom on their way to the Final.

The prizes on offer – silverware and the chance to join Dublin and Meath as Senior Championship teams in Leinster next year – are tantalisingly close but, as it always is on Final day, only one can prevail.

THERE was some talk in the build-up to Meath’s successful and dramatic TG4 All-Ireland Senior semi-final victory over Cork that the Royal County were genuinely capable of toppling the Leesiders.

You’d have got long odds on Meath finishing the job with a minute left on the clock, however, before that stunning late comeback yielded two goals to take the tie to extra-time.

Whether Meath are good enough to topple Dublin at Croke Park remains to be seen – but they’re here on merit.

Their recent history is worth talking about, to illustrate the magnitude of what they’ve achieved to get this far.

Six years later, they ran Cork to two points in the group stages, before beating them in that thrilling semi-final.

In May 2019, Meath eased past Sligo to win the Lidl NFL Division 3 crown. 2020 and Covid stalled their League progress, with the competition halted after five rounds, but they were back for more League glory in June, defeating Kerry at Croke Park to land the Division 2 title and promotion to the top flight.

And consider, too, that this is a Meath team that won the TG4 All-Ireland Intermediate title last year, to regain Senior status.

Back in 2005, Armagh won the Junior title and appeared in a Senior decider 12 months later.

In similar fashion, and In the space of just nine months, Meath have moved from Intermediate champions to Senior contenders.

They last played Dublin in a Senior Championship game in 2016, in Leinster. Dublin won by 18 points on that occasion but Meath will feel that if they can reel in a 40-point gap in six years, 16 is more than achievable.

That’s a simplistic view, of course, when you consider that Dublin were just about to embark on a period of sustained dominance. After losing a third successive All-Ireland Final to Cork in 2016, they cracked the code against Mayo in 2017 and have held the Brendan Martin Cup from then until now.

On Sunday, Dublin could emulate the feats of former Cork and Kerry teams and join an elite band of five-in-a-row winners.

This is a golden age for Dublin, under the astute guidance of Mick Bohan. They were already very good but then along came Hannah Tyrrell, the former Ireland rugby international to bolster their ranks.

Tyrrell, a former Dublin goalkeeper, has been sensational in attack and she’s Dublin’s leading scorer in Championship 2021 with 0-19.

Dublin managed to get past Mayo with relative ease at the semi-final stage, even without injured trio Carla Rowe, Niamh McEvoy and Niamh Collins.

There’s an impressive squad depth and back came Sinead Goldrick following a lengthy period out with a serious hamstring injury.

The Dublin machine rolled on and now there’s another title within touching distance.

Meath have produced some special displays on their journey to a very first Senior Final but it would take something extraordinary for them to get their hands on silverware on Sunday.

That’s not to say it can’t be done – far from it, as this is a Meath team that likes nothing more than defying the odds. The Leinster rivalry and the neighbourly feel to proceedings will add some spice, too, and this Final is one to savour.

Dublin won’t have faced anything like Meath during their recent period of dominance but the opposite also applies. In terms of how far they’ve come, this is the acid test for Meath.