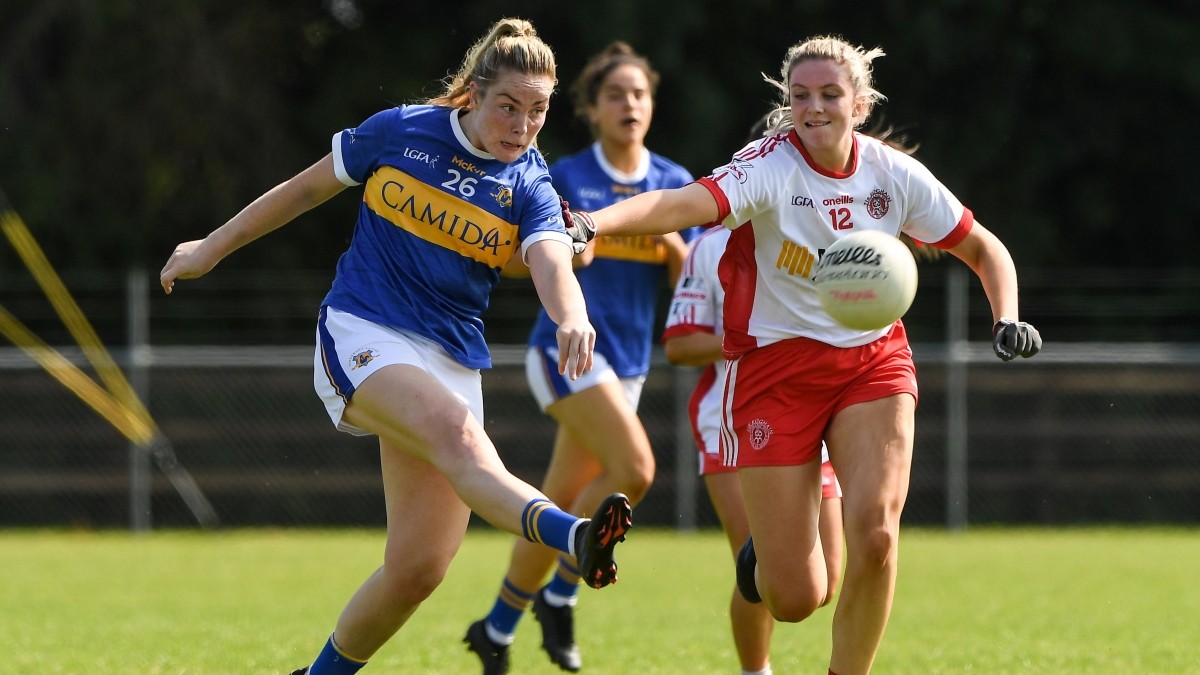 By AISLING CLERY (Aisling McCarthy of Tipperary in action against Aiobhinn McHugh of Tyrone during the TG4 All-Ireland Ladies SFC relegation play-off match between Tipperary and Tyrone at Coralstown Kinnegad GAA Club in Kinnegad, Westmeath. Photo by Matt Browne/Sportsfile)

Aisling McCarthy finished with 1-7 as Tipperary secured senior status for 2022 after an epic TG4 All-Ireland SFC relegation play-off encounter with Tyrone at a sunny Kinnegad.

Five goals in the opening half handed Tipperary a lead Tyrone could not overcome. Marie Creedon (two), Áine Delaney, Roisin Daly and McCarthy all got goals in the opening half for Declan Carr’s team. And while Niamh O’Neill contributed 1-9 to the scoreboard, Tyrone were unable to get through a resolute Tipperary defence and they will play in the intermediate championship in 2022.

The game opened at frantic pace with Tyrone initially enjoying more of the possession and they hit three unanswered scores with Aiobhinn McHugh, Niamh O’Neill and Grainne Rafferty all pointing, the latter from a free.

However, Tipperary responded well with Aoibhe O’Shea and Aisling McCarthy reducing the deficit to two. A brace of Niamh O’Neill points re-established Tyrone’s lead but the game turned when Creedon got her first goal.

An O’Neill free pushed Tyrone briefly back in front but Tipperary struck for two goals in as many minutes with Áine Delaney and Creedon hitting the target just before the water break.

Emma Brennan got Tyrone back to within three points but McCarthy increased Tipperary’s lead to four. The substitution of Roisin Daly proved immediately fruitful as she found the net with just her second touch.

Tipperary were unlucky to not go further ahead as Delaney’s effort off the crossbar. While Tyrone pointed through Sasha Byrne and Niamh O’Neill, it was Tipperary who were the happier at the break as a McCarthy goal just before half time put eight points ahead at the break.

The second half opened end to end with an O’Neill goal sandwiched between two McCarthy points. Points from McHugh, O’Neill and Grainne Rafferty reduced the deficit to four points, however Tipperary steadied the ship and a McCarthy free and a Sasha Byrne goal put Tipperary back in control and they again led by eight at the second water break.

As Tyrone tried to get back into contention, the Tipperary defence responded admirably and a double save from keeper Lauren Fitzpatrick denied Tyrone the goals they needed.

Daly got Tipperary’s sixth goal when Angela McGuigan rescued the ball off the end line and while Tyrone pulled back a couple of points from Nichola Rafferty and Grainne Rafferty, Tipperary held on with McCarthy splitting the posts with a final score to ensure senior status for 2022.