FOOTBALL: ‘To have the opportunity to line out in blue and gold and sing the national anthem. It’s something I had longed for.’ – Tipperary’s Edith Carroll 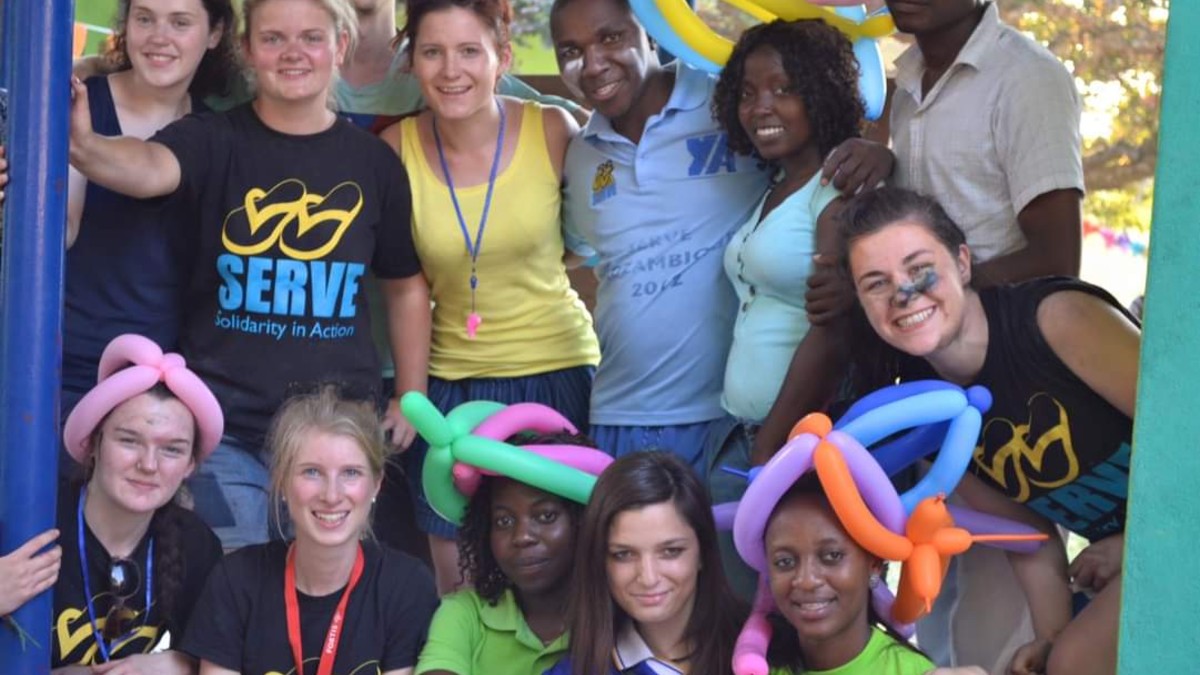 (Edith Carroll is pictured back row centre, with the rest of the SERVE volunteers at the annual Sports Day organised for the children in the Dondo region of Beira, Mozambique.)

Edith Carroll feared she would never play again when she was struck down by a gruesome repetitive strain neck injury in pre-season four years ago.

And while Tipperary’s Lidl National Football League opener against Cork may have ended in defeat last week, it was a day of contrasting emotions for Carroll, one of their most experienced campaigners.

The 30-year-old Galtee Rovers/St Pecaun’s forward has a greater appreciation for what’s really important in life, having volunteered for stints in Brazil and Mozambique.

And she fought her way back from injury with her club before finally wearing a Tipperary jersey again in the 3-15 to 2-6 loss to Cork at Páirc Uí Chaoimh.

“Any day that you come off and you are beaten by that margin you are going to be disappointed,” said Carroll.

“But there are lots of positives, there are only a handful of girls who were there when I played last and it’s not a million years since I played.

“Personally, there was that bit of apprehension getting back. But there was something liberating about having this chance. At one stage I never thought I would be able to play again.

“To have the opportunity to line out in blue and gold and stand in Páirc Uí Chaoimh and sing the national anthem. It’s something I had longed for.

“I had so many nice messages of support and people saying it would be great to see me back. And while that did add to the anxiety and nervousness, I said this is an opportunity.

“If you are not going to enjoy it now, what was it all for?”
Even though she missed out on Tipperary’s more recent All-Ireland intermediate crowns in 2017 and 2019, Carroll was only just in the panel when she experienced the same success back in 2008.

She went on to spend a decade in the team while off the field the charity SERVE captured her imagination.

Carroll began her voluntary work when she travelled to South America as part of a joint initiative between UL and NUIG. She spent five weeks helping to build houses in Brazil in 2011.

The next expedition took her to Africa in 2015, where SERVE partnered with Young Africa in Mozambique. Carroll was volunteering for five weeks again, this time in a leadership capacity.

“It would really open your eyes. The biggest thing was probably the work that goes on and the things people are doing all the time,” said Carroll.

“People get the impression when you are volunteering that you are going to do everything. A lot of what we were doing, even though we were doing manual labour, it just opened your eyes to the work that is actually being done.

“What I really like about SERVE is they work with partner organisations who are already formed on the ground. They are not coming in without an understanding of the culture and context.

“They are actually working in partnership. Their slogan is ‘serve in solidarity’. It is an understanding of people, not trying to force a system or setup on a culture that you don’t have any understanding of.

“That is why they are so successful.”

Meanwhile, Carroll began her career as a PE and Irish teacher at Rockwell College. She also coached Ladies football and hockey there.

From the start she loved life in the Tipperary secondary school but ultimately it would be her day-job that ended up contributing to her injury in 2017.

“With teaching there is a lot of preparation and corrections that go into it,” said Carroll.

“The previous summer before we went back, I was correcting papers and I was stooped over a desk for hours on end every day. So many papers had to get done.

Carroll still remembers the morning of an ill-fated pre-season challenge match with Westmeath. She was making her final preparations before leaving the house when she turned and jarred her neck.

She got a rub from the physio and didn’t think much of it but ended up having to come off that day.

“The pain I experienced, I can’t describe it. One of my discs was leaning on a nerve. I was getting pain all down my left arm first, and then on my right side,” said Carroll.

“It was more of a chronic pain and I was losing sleep with it. It was one of the most horrific things I have been through.”

There were consultations with Dr Matt Kiely in Limerick and Dr Éanna Falvey in Cork, but it was Colin Roles of Optimise Health and Performance in Clonmel that perhaps left the telling impact.

Carroll was back in time for Galtee Rovers/St Pecauns’ drive to a Munster Junior final in October 2019, and she scored a point in that defeat to Cork’s Donoughmore.

She was thrilled when new manager Declan Carr welcomed her back into the Tipperary set-up this year.

“Declan is really professional in the way that he goes about things. He has particular ideas in his head. We just need to buy into them,” said Carroll.

“He has a certain respect for hard work and is going to have a great influence on this group of players.”

Tipperary are still without AFLW stars Orla O’Dwyer and Aisling McCarthy but they will be a couple of massive additions on their return.

“It will be great to have the girls rejoin the panel,” said Carroll.

“They are constantly in touch and we are obviously very proud of what they have achieved. It will be brilliant to have them back in, just in terms of the experience they have.”

Having lost so heavily to Cork, it will be an uphill struggle in a Division 1B that also contains reigning All-Ireland champions Dublin. But for now the focus is on Waterford in Clonmel tomorrow.

“It is going to be a big challenge. Even coming up through the ranks there has always been a rivalry between Tipp and Waterford. But I don’t think there is any fear,” said Carroll.

“That is why I love being involved in this panel. They are so young, there isn’t any fear there. Whatever they will come up against they are up for the challenge.

“We are in a much better position now having played together. We had a bit of time during the week to digest what has gone on. The good things and the not so good things.

“We are in a good position and really looking forward to it.”