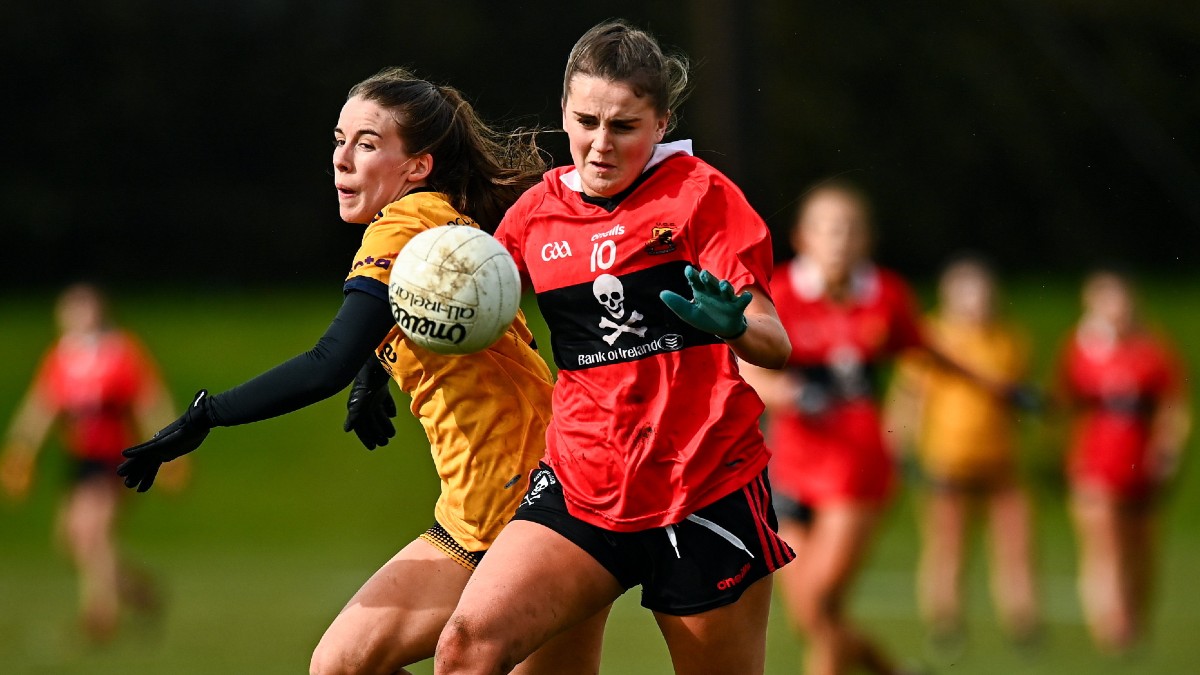 By DARAGH SMALL (Kellyann Hogan of UCC is tackled by Róisín Ennis of DCU Dóchas Éireann. Photo by Eóin Noonan/Sportsfile)

Katie Quirke’s first half goal was crucial as UCC booked their place in the final of the Yoplait O’Connor Cup with victory over DCU Dóchas Éireann.

The Cork ace struck in the first half and her side took a narrow lead into half-time, before they held on with Anna Carey on target for their second goal at the DCU Dóchas Éireann Sports Campus.

The reigning Division 1 champions dominated the early exchanges but they went into the first water break trailing by a point, and they were 1-3 to 0-5 in arrears at half-time.

TG4 All-Star Emma Duggan opened the scoring in the sixth minute, en route to a personal tally of 0-6. She converted a free following a foul on Maria Reilly, who was a late inclusion in the DCU Dóchas Éireann starting 15.

But UCC found a way into the game and a point from Ciara McCarthy drew the sides level nine minutes later, with her second score giving UCC the advantage for the first time.

The Cork outfit were 0-2 to 0-1 in front at the water break and although Duggan landed her second free to tie it up, UCC took a stranglehold when Quirke found the net. She capitalised after a goalmouth scramble and finished past the stricken Abby Shiels in the 23rd minute.

DCU Dóchas Éireann scored 0-3 before half-time with Duggan adding two frees and one from play but Kellyann Hogan rounded off the scoring to give her side the lead.

Hogan scored again after the restart and Carey scored the second UCC goal in the 37th minute when the opposition defence failed to deal with Quirke’s delivery.

Emma Morrissey was on target with the only DCU Dóchas Éireann point in the third quarter and they were left with a 2-4 to 0-6 deficit.

And even when Jennifer Dunne and Duggan combined to give their side a lifeline, DCU Dóchas Éireann were always chasing the game. UCC held firm and Quirke scored a fine effort late on to put a gloss on the scoreline.