FOOTBALL: UCC & Cork’s Emma Cleary: “We know we can put it up to them” 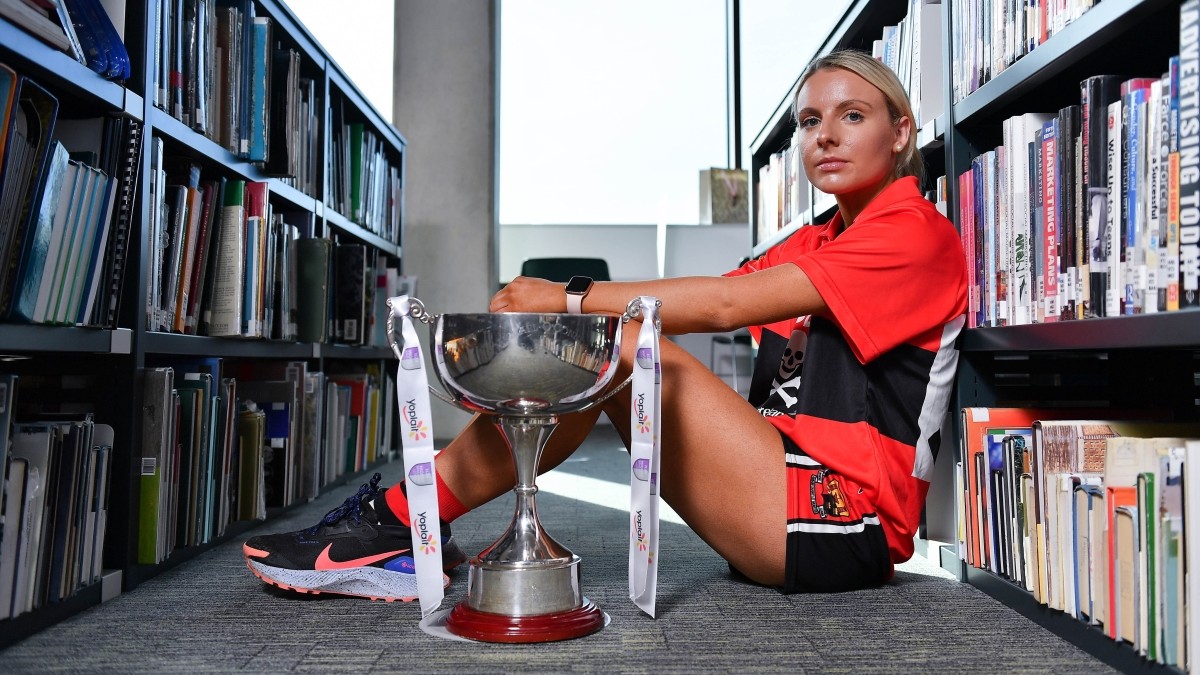 By DARAGH SMALL (In attendance at the Yoplait LGFA Higher Education Football Championships Captains Day is Emma Cleary of UCC with the O’Connor Cup at DCU St Patrick’s Campus in Drumcondra, Dublin. Photo by Brendan Moran/Sportsfile)

UCC forward Emma Cleary says her team may have not have the star power of some of their counterparts in the Yoplait O’Connor Cup this weekend but a win is long overdue at this level.

The Cork university have not been victorious in the competition since 2012 and face stiff opposition from UL, NUI Galway and today’s opponents DCU Dóchas Éireann.

Cleary, who is still only 21 and is in her third season in the Cork panel, is joined by county teammates like Katie Quirke and Sadhbh O’Leary, while her opponent last weekend, Kellyann Hogan of Waterford, will lead the line for UCC.

But despite having those talents to call on, she still knows it will an up-hill challenge, especially against DCU.

“They have the likes of Emma Duggan, Jennifer Dunne and Niamh Hetherton,” said Cleary.

“We have great girls around the pitch and maybe it’s not known as much as the DCU girls that we’re going to face, but we still have a very strong panel. We know that we can put it up to them.

“I don’t think there will be much point in us going up if we didn’t think we could win. There is huge competition and the fact that UCC haven’t won it since 2012 shows how much competition there is out there.

“Even when I was in first year, we had a team of nearly All-Stars: we had the likes of Eimear Meaney playing, Hannah Looney, and we still fell short in the semi-final. When you get to the weekend, anything can happen.”

Cleary is daughter of legendary Cork footballer John Cleary, the two-time All-Star is now the coach of the Rebels’ senior footballers.

Emma Cleary burst onto the scene through the underage ranks and the Éire Óg ace is now fighting for her place in one of the most competitive squads in the country.

“Every year you are looking to impress but as you get a bit older and you have a few more years on the panel you want to put your hand up for a spot, but still nothing is guaranteed,” said Cleary.

“It’s great in Cork, we are lucky we have great numbers all the way up and it’s very competitive. Our panel, even to get into the 30 on the matchday panel, everyone is chomping at the bit for that. To get onto the starting 15 is another step up.

“I have enjoyed the league this year, starting all three league games. We need to put the head down for the next eight weeks and whoever is playing well will get the first 15 numbers.

“The league isn’t the be-all and end-all. We would have liked to have got a few more results. But we survived in Division 1 and we’ve a good run-in to championship now, where we can get a bit of work done and hit the ground running when we hit the championship.”

The Yoplait Ladies Higher Education Committee Championship Finals will be held at DCU this Friday and Saturday (March 11 & 12). In the flagship Yoplait O’Connor Cup semi-finals, DCU Dóchas Éireann will play UCC, with holders UL up against NUIG today (Friday). The Final will be played tomorrow (Saturday).