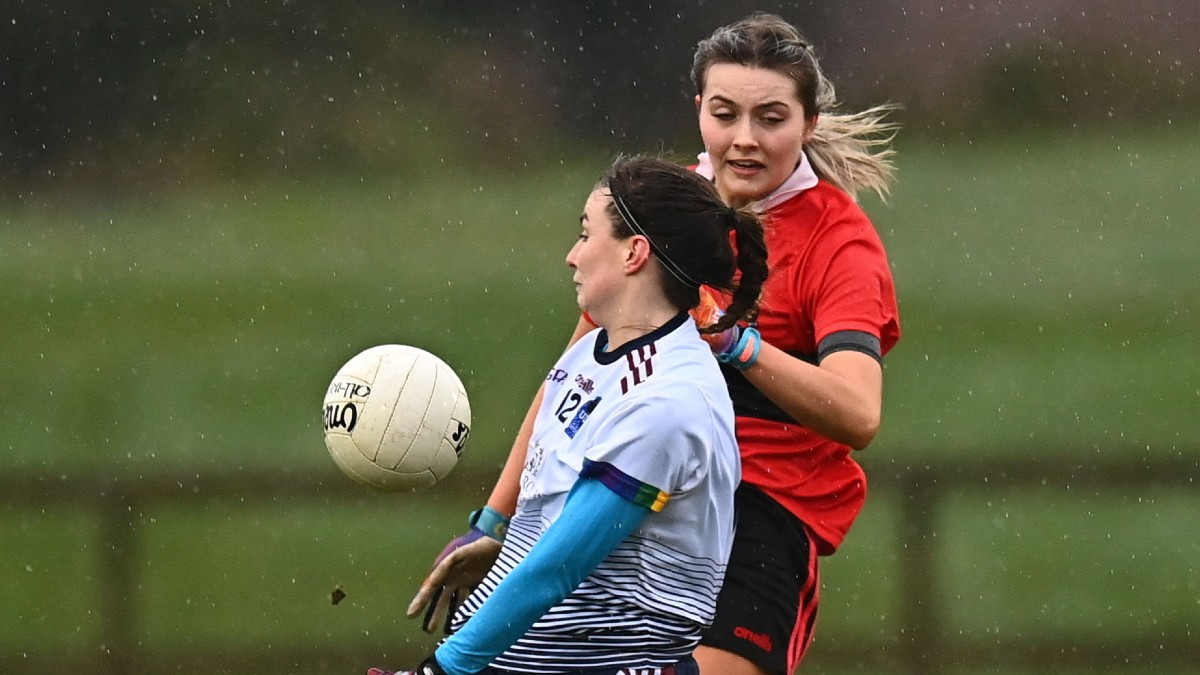 By DARAGH SMALL (Eve Mullins of UCC in action against Dearbhaile Beirne of UL. Photo by Eóin Noonan/Sportsfile)

UL captain Fiadhna Tangney scored 0-4 and her side were crowned Yoplait O’Connor Cup champions again after a thrilling win over UCC.

The holders held a 0-10 to 0-4 lead at half-time and they went on to make it five titles since 2014 at a wet and windy DCU Dóchas Éireann.

But it was not without a scare, UCC came with a late fightback and they almost got level before the end only for the equaliser to evade them.

Tangney won the toss and UL played with a strong wind at their backs in the first half. They scored twice in the opening minute with Erone Fitzpatrick and Tangney on target.

UL went on to take a 0-8 to 0-0 lead into the water break. UCC were struggling to contend with the driving rain into their faces, Tangney brought her tally to 0-4, while Niamh O’Connor, Ailish Morrissey and Hannah O’Donoghue also chipped in, in the opening quarter.

The reigning champions were making the most of their wind advantage but Katie Quirke set up Sadhbh O’Leary and she got UCC’s first point of the game in the 22nd minute.

Ciara McCarthy scored from distance shortly afterwards and Sarah Leahy got forward for another but Morrissey steadied the UL ship, and they were 0-9 to 0-3 in front approaching half-time.

Aisling Reidy and Emma Cleary exchanged points before the interval and Quirke was inches away from a badly needed goal.

However, UL went in with a six-point lead and although Cleary scored early in the second half there was no onslaught. Instead, Morrissey scored her third, this time from a free, and almost found the net moments later.

That left the door open for UCC who were still in the game, trailing 0-11 to 0-5, in the 39th minute. Quirke was next to score but Morrissey answered that again and it looked like UL would cruise to the win.

However, UCC caught fire in the closing quarter; Kellyann Hogan scored in the 50th minute and further points from Quirke (two), McCarthy and Laura O’Mahony brought the lead down to just one with time running out.

UCC were on the brink and they had a number of chances late on but Hogan shot wide from a free and they couldn’t find another opening to draw the sides level.