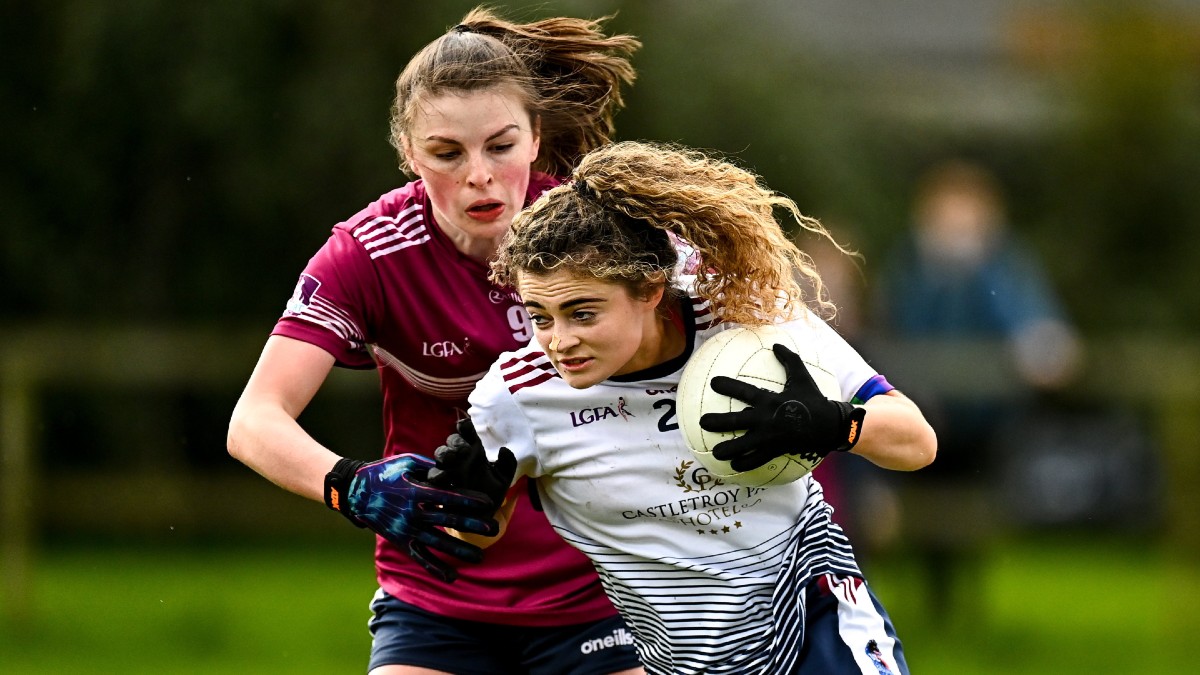 By Aisling Clery (Aoife Molloy of UL in action against Aoife Geraghty of NUIG. Photo by Eóin Noonan/Sportsfile)

UL Captain Fiadhna Tangney hit 1-6 and the holders secured their spot in the HEC Yoplait O’Connor Cup final at the expense of NUI Galway at DCU Dóchas Éireann Sports Campus.

Four second half goals were the difference with Tangney, Ailish Morrissey, Hannah O’Donoghue and Erika O’Shea all finding the net for DJ Collins’ side. Eva Noone was in excellent form for the Galway university but it wasn’t enough as UL progressed to a final meeting with UCC tomorrow.

The opening quarter favoured NUI Galway with Eva Noone scoring two points from frees in the first three minutes. Tangney scored at the other end before Noone added two more scores.

Erone Fitzpatrick opened her account for UL before Lauren McGregor cancelled that out from a free. Noone scored another free but Morrissey pointed to ensure NUI Galway led by 0-6 to 0-3 at the break.

Fitzpatrick and Tangney reduced the gap to one after the water break with Tangney also forcing a save from NUI Galway goalkeeper Karen Connolly. Noone and Morrissey swapped points before Fitzpatrick levelled the sides on 21 minutes.

Points from Tangney (free) and Hannah O’Donoghue pushed the UL team into the lead for the first time. UL were enjoying more of the possession but Eva Noone scored on the stroke of half-time to leave the minimum between the sides at the break, 0-9 to 0-8.

The second half burst into life as Niamh O’Connor’s shot rebounded off the crossbar and Morrissey was the first to the loose ball, she found the back of the net. UL could have been further ahead as Connolly saved from Siobhan McMahon. Sinead Regan scored for NUI Galway but when O’Donoghue netted, there looked to be no going back. At the second half water break UL were 2-11 to 0-9 in front.

O’Shea rifled to the net for UL’s third goal on the resumption and although NUI Galway did score a consolation through Eimear O’Kane, Tangney added 1-1 to ensure UL returned to another O’Connor Cup final.