FOOTBALL: “Us and Mayo we know each other well and we have had a lot of games against them” – Carla Rowe 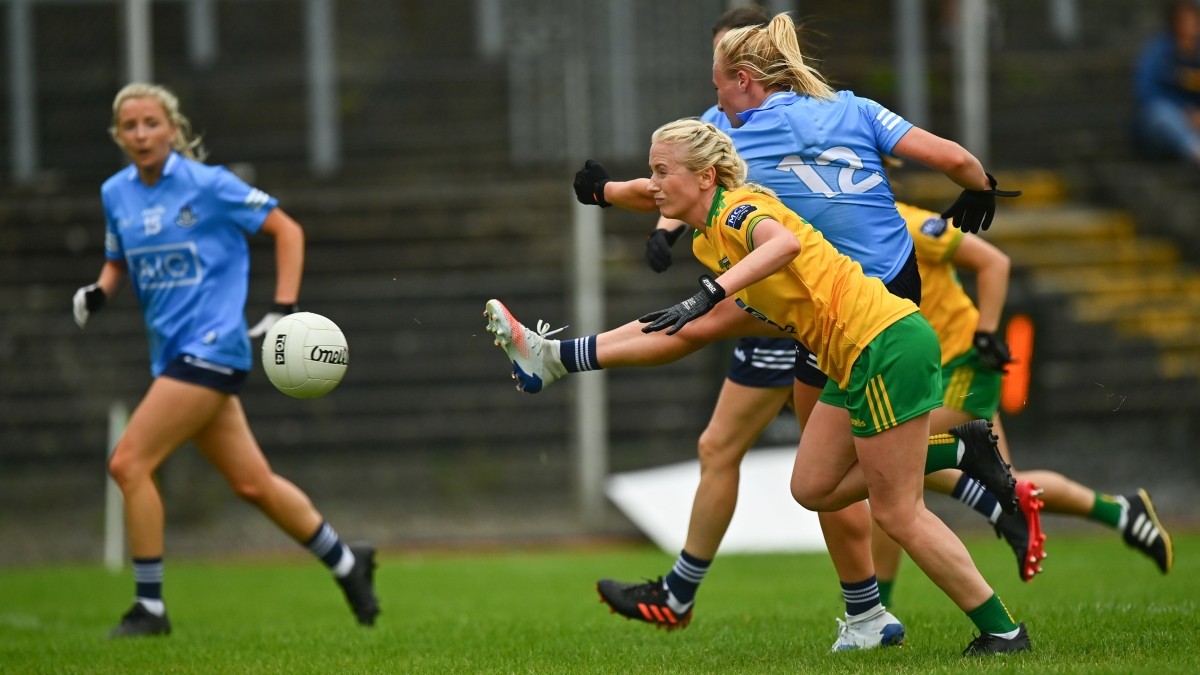 By AISLING CLERY (Carla Rowe of Dublin shoots to score her side’s first goal in Carrick-On-Shannon. Photo by Eóin Noonan/Sportsfile)

Two goals from Carla Rowe paved the way for champions Dublin into the TG4 All-Ireland Senior Championship Semi-final after Donegal threatened to dethrone the champions in Carrick-on-Shannon.

An early goal from Geraldine McLaughlin and a second from Katy Herron just before half time was just what Maxi Curran’s side required, but Rowe struck goals in each half to seal the win for Dublin, who now go on to face Mayo in the next round.

“It’ll be a brilliant battle as always,” said Rowe. “Us and Mayo we know each other well and we have had a lot of games against them. We have to go now and focus on that game, start doing some work and just look to improve. Every game, that’s what we are trying to do.”

In the first five minutes it seemed as if we were in for a very different encounter. After her early free, Geraldine McLaughlin hit the net for Donegal when they forced a turnover from the kickout, while a second free from the Termon forward put Maxi Curran’s side 1-2 to 0-0 ahead.

But with Rowe setting the standards up front Dublin soon settled. Rowe and captain Sinéad Aherne pointed for the champions, before Rowe’s first goal in the 16th minute helped Dublin amass a healthy lead.

Just before the break Heron caught the Dublin defence napping, cut in from the end line and struck Donegal’s second goal, which meant Dublin only led by 1-6 to 2-2 at the break.

The two goals had given Donegal a chance, but Rowe and substitute Siobhán Killeen landed the first two scores of the second half to replenish Dublin’s advantage.

And although McLaughlin added her third free of the contest to bring Dublin within touching distance, Rowe grabbed her second goal to increase Dublin’s lead after quick free from Killeen created the chance.

Dublin continued to build on that advantage and Tyrrell added two quick scores, which opened up a seven-point gap.

Geraldine McLaughlin’s free taking kept Donegal in touch in the closing stages – all of their points came from frees – while further scores from the excellent Lyndsey Davey and Rowe saw Dublin through.

“We wouldn’t be hugely pleased with the performance overall, we were very sloppy,” said Dublin manager Mick Bohan.

“Then we looked like we took control of the game. We played some decent football, then we sort of went into ourselves again and we gave them an opportunity just to stay alive, when we had an opportunity to put them away.”

For Donegal there were plenty of regrets after the game and their manager Curran thought his side had a chance to cause an upset.

“We are very disappointed. On the road, we felt we had a really good shout here today,” said Curran.

“We got a great start into the game, we just weren’t able to maintain it. Dublin, being the great team that they are, they just kind of clawed us back.

“We just didn’t really kick on in the second half, we were up against a very seasoned team that were able to stop us by fair or foul means. We found it very difficult to get through the middle third, and by the time fouls and frees were given, players were back. We couldn’t get the supply inside and ultimately they were able to squeeze us out.”