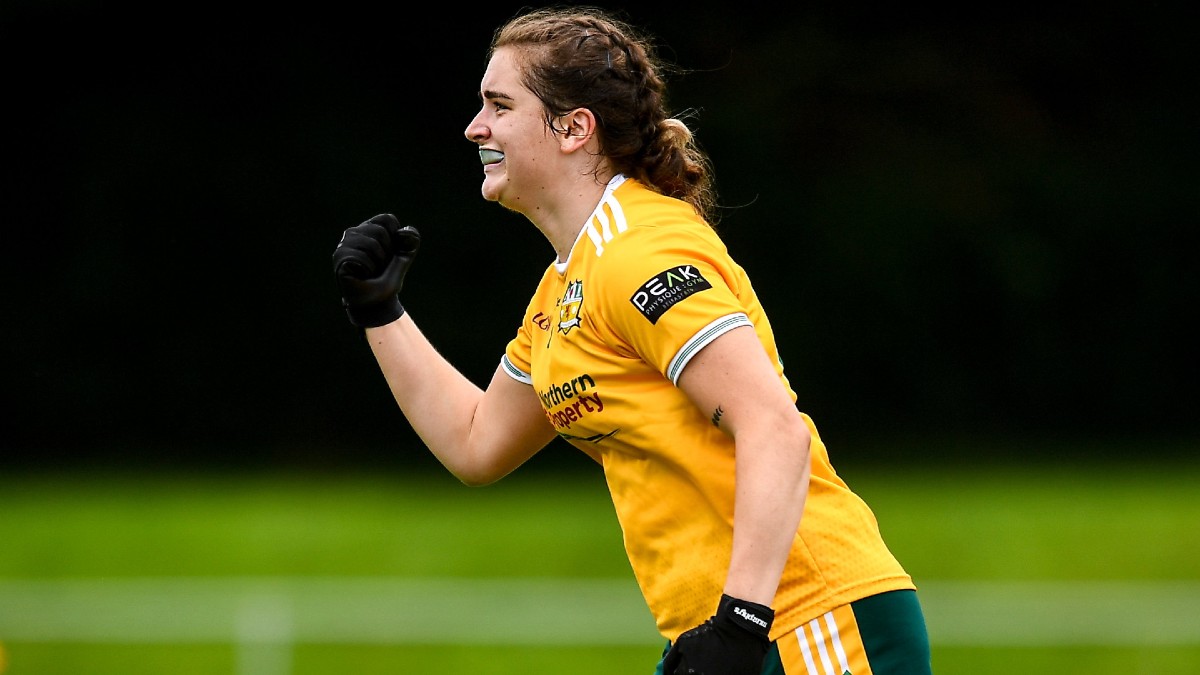 The 21-year-old played an integral part in her side’s four-point win over Carlow in the semi-final, coming on at half-time to score 1-5, and help set up a final date with Wicklow at Croke Park.

Her superb contribution was all the more notable given that she had played netball with Northern Ireland in international games against Scotland and Wales in the days leading up to the Carlow game.

She says she didn’t have time to think too much about her role against Carlow; when she got the opportunity to play in the semi-final, she just did her best.

“I played netball two days before so I didn’t have time to overthink it. I just got on with a role to play to cause a bit of hassle. I don’t normally really think about outcomes, I think about performance. Luckily it paid off and I got a few scores. I was really happy to have had that impact,” she said.

Magee’s really looking forward to Antrim’s first TG4 All-Ireland junior final appearance since 2016 – and is optimistic that the Saffrons can land silverware and move up to the Intermediate grade.

“I think we are underdogs going in against Wicklow. No-one has really got near them in this campaign. We came within five points of them. I think that is the closest anyone has got. I think we are really relishing the fact we are underdogs and that takes the pressure off us. Anything can happen on final day. We are grateful to be there, but really wanting that win,” said Magee.

There is an immense sense of positivity in the Antrim camp – and superb support throughout the county.

And Magee says that a win would be a major boost, particularly as a motivating factor for the underage players.

“It would be massive. I think it is about time that Antrim got out of junior and started working their way up the ranks. That would be a good start. With increased coverage that female sport is getting, all those young kids will be watching. No matter what happens on the day, we have all done the county proud. I think to win would be really special. We are not happy to be a junior county, we are not happy to be Division Four either. It would be great for all those minors coming through,” she says.

Magee notes the tremendous underage structures in the county and the hard work put in there has played a pivotal role in the march on Croke Park.

“The successes of the minor, under-16 and under-14 teams within Ulster have been massive. It’s obviously a hard province as well. It is really exciting to see youngsters coming through. The infrastructure within Antrim football has really taken off. It is a credit to all the volunteers. The talent coming through is really exciting,” she says.

Michelle is passionate about her football, and also netball, in which she has achieved a huge amount in the past few years. She won her first senior cap for Northern Ireland in 2017 when she was just 17. The following year, she played for Northern Ireland in the Commonwealth Games in Australia while she was still in school and in 2019, she played in the World Cup in Liverpool. She has just finished her first season as a semi-professional with Leeds Rhinos in the British Super League.

Her focus on netball, allied to her studies in the UK, has limited her involvement with her county’s football side in the past few years. However, this hasn’t impacted negatively on the quality of her contributions in the games she has played.

She credits her mum, Andrea, for her involvement in netball, while her dad, Jim, has always been an inspiration in Gaelic Games as he has played and coached teams for many years.

“My mum played netball growing up and she is a coach with Westside Netball Club in Belfast. My sisters and I were always brought along to netball training. Similarly with dad, he played Gaelic Football and coached so we were brought to the Gaelic Football as well. We always played both and we always loved both. I went to Loughborough University in England in 2018 and that was when I really started to focus on the netball.”

Magee recently graduated with a Degree in Biomedical Engineering from Loughborough University and while she plans to pursue a Master’s Degree in Regenerative Medicine, she will concentrate on sport in the immediate short-term, combining netball with Leeds Rhinos and Ladies Football with Antrim.

She says her parents were a great support in her studies. “My parents have always pushed us with education. They have always highlighted the importance of it. For us, it was always non-negotiable. We were always coming out of school, going to after school, going to club training, getting homework done in between. They are never far away if I need a chat or anything. I am really lucky in that sense.

“I’ll definitely go and do a Masters but probably not this year, just with what’s on my plate. I’m waiting to finalise plans for next year. A lot of it will be focusing on the netball, getting the football in where I can. I’m sure there will be a bit of part-time work in there somewhere.

“Last year, I was based in Leeds, where I lived. This year, I will be back and forth from Leeds, hopefully trying to fit in Ladies Football when the county season starts as well. . . just going to try and work out the two,” she added.

For now though, Magee’s immediate focus is on Croke Park tomorrow, when she hopes that she and her teammates can come away with the silverware.