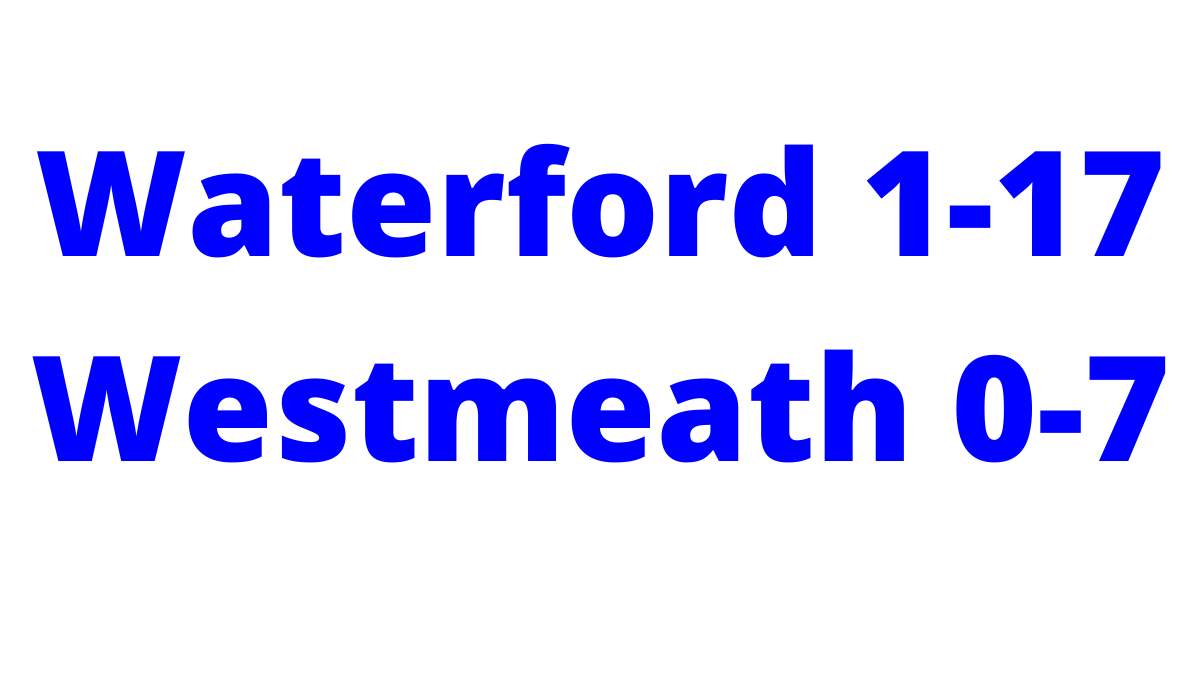 The sides were level 0-5 to 0-5 at half time but Waterford dominated possession throughout and there were impressive displays from Emma Murray in midfield, along with Aileen Wall and Lauren McGregor up front.

Westmeath battled bravely and Sarah Dillon scored four points for Michael Finneran’s team but Waterford outscored last year’s TG4 All Ireland Intermediate champions by 1-12 to 0-2 in the second half, dooming them to the drop.

The opening quarter was a tight affair and two Sarah Dillon points (one free) alongside an Anna Jones free meant they led by 0-3 to 0-2 at the water break. Waterford’s opening points came courtesy of Lauren McGregor and Aisling Mullaney.

McGregor levelled the game for Waterford after the break before Megan Dunford and Sarah Dillon traded points. Aileen Wall opened her account on 25 minutes and while Waterford spurned chances, a fourth Sarah Dillon point ensured the sides were level at the break.

Aileen Wall got her second point as the action resumed in the second half before two Katie Murray points opened up a three-point gap. Chloe Kelly reduced the arrears to two but the Waterford attack was unrelenting. Points from Mullaney, Katie Murray and a Brid McMaugh free increased Waterford’s advantage to five points.

The lead was six when Emma Murray and Katie Murray teamed up and found Mullaney who floated the ball over the bar. Waterford could have been further ahead but for Ciara Faulkner in the Westmeath goal, who made several saves. Jones got her second free and there were just five points between the teams at the second half water break.

In the final quarter, Waterford continued to dominate and the introduction of substitute Chloe Fennell added further threat, as she converted two points. With five minutes left in the game, Waterford’s attacking prowess was rewarded when Aine O’Neill played in McGuckian who made no mistake with the goal.

While Westmeath tried to get back into contention, Waterford finished stronger and points from McMaugh and O’Neill ensured survival.

Waterford manager Pat Sullivan says his players had pulled off a crucial victory as they battled for survival in Division 1 of the Lidl National Football League.

Westmeath were relegated after a 1-17 to 0-7 loss to the Déise at Abbostown as Sheena McGuckian came up with the goal.

Just 24 hours earlier McGuckian was celebrating with her UL teammates when they lifted the Yoplait O’Connor Cup in DCU Dóchas Éireann. And the substitute played a starring role as Waterford stayed up.

Elsewhere, Louth are safe in Division 3 following their 2-7 to 0-5 win against Wicklow.

But the Waterford manager knew how important it was to preserve their Division 1 status after difficult defeats against Dublin, Meath and Cork.

“We classed today as an All-Ireland final, it meant everything to us,” said Sullivan.

“We want to stay in Division 1 and we want to go on. We want to be looking at next year, can we be in a semi-final more than fighting relegation.

“At the back our minds all week we were very conscious of what was at stake, today we knew that we had come up against three of the best teams in the country.

“We’ve developed a number of younger players, who only came out of minor last year. We’ve seen everybody, everybody’s got a game and has played some time in the league.”

Waterford and Westmeath were level 0-5 to 0-5 at half-time and the Munster outfit didn’t stretch clear until the third quarter. With five minutes remaining Aine O’Neill provided the assist and McGuckian found the net to put the result beyond doubt.

Westmeath were crowned TG4 All-Ireland intermediate champions last September but there has been a huge turnover of players and their new manager Michael Finneran knows they need to bounce back in the summer months.

“Confidence is low after getting the few defeats in the group stages of the league but it’s something we’ve to work on and pick ourselves up for championship,” said Finneran.

“We are very disappointed especially the way it ended. It was a tight game, especially in the first half, they ended up winning and deservedly so.

“When we look at ourselves, in possession we made a lot of unforced errors, there was an awful lot of them and you can’t do that at this level. We gave the ball back to them way too many times.”

Wicklow will play their football in Division 4 next year, after Louth came from behind to win in the first of the day’s games in Abbotstown.

Wicklow led for much of the first half but the game was turned on its head when Niamh Rice found the net and followed it up with a second to give Louth a 2-2 to 0-3 advantage at the break.

Wicklow got back into the game after half-time but Louth finished stronger and they will remain in the third tier for next season.