FOOTBALL: “We were relentless and I thought our fitness levels were phenomenal” – Ephie Fitzgerald 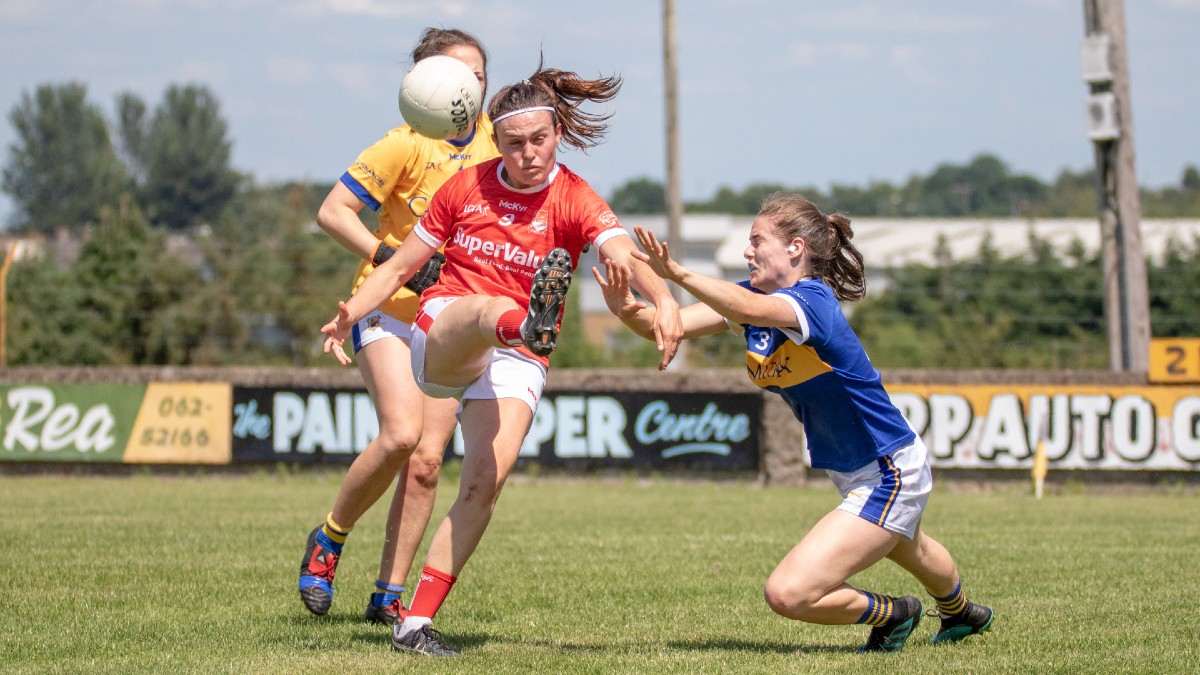 Compiled by John Fallon (Tipperary full back Maria Curley gets a block in on Cork Hannah Looneys shot. Cahir Media)

Cork manager Ephie Fitzgerald hailed his side’s fitness as they tamed the tropical temperatures to defeat Tipperary and qualify for the TG4 All-Ireland Senior Championship Quarter-final.

The Rebels’ boss compared playing conditions in Tipperary Town to those he experienced in Thailand on an All Star trip, but despite their difficulties, two goals each from Eimear Scally and Sadhbh O’Leary saw them qualify with a 6-14 to 1-10 win.

“We never gave up, we kept going to the end, we were relentless and I thought our fitness levels were phenomenal,” said Fitzgerald.

“It was really hot out there – it reminded me a bit of the temperatures we had in Bangkok a few years ago on an All Star trip.

“We will relax now and have a look at Waterford and Tyrone next week and prepare for them in two weeks’ time.”

Dublin boss Mick Bohan expressed his satisfaction as the Sky Blues and five-in-a-row chasers also booked their spot in the knock-out stages.

Dublin saw off the challenge of Waterford with two Caoimhe O’Connor goals setting up for a 6-12 to 1-10 victory at Baltinglass.

“We had to solve a few problems in the first half, we were probably a little bit sloppy, gave them a bit of energy just by giving the ball away cheaply,” said Bohan.

“I thought there was some really decent stuff in the second half.

“We have a break now next week, a great opportunity for the squad to regroup with a game amongst ourselves and see those people that are biting at the bit to try get in and are probably a bit frustrated that they didn’t get to play today.”

Elsewhere on Saturday, victories for Armagh and Mayo over Cavan and Monaghan respectively assured them of quarter-final slots. Aimee Mackin fired ten points for Armagh, while goals from Kelly Mallon, Caroline O’Hanlon and Aoife McCoy saw them emerge 3-18 to 3-10 winners.

Mayo needed Shauna Howley’s successful kick in the free-kick shoot-out to seal their place in the last eight, which resulted in a 0-13 to 0-12 win. Manager Michael Moyles admitted his side were relieved to take the honours.

“We made a lot of bad decisions on the ball at times. But that’s credit to Monaghan as well. We are delighted with the win, but we wouldn’t be happy with our performance,” said Moyles.

For Monaghan, it was an inspirational performance following the death of the county’s U-20 captain Brendan Óg Ó Dufaigh the previous evening. Their manger Ciaran Murphy paid tribute to his players’ efforts.

“We are disappointed to lose a game in which we went so close. But our thoughts are with the family of Brendan Óg,” said Murphy.

“There are a lot of girls in there who knew Brendan. So that is at the forefront of our minds at the minute.

“On the game itself we are gutted. We experienced (a shoot-out) before in the National League semi-final. It just didn’t happen for us. Credit to the girls who stood up. We couldn’t fault them.”

And in Group 4, Galway confirmed their place in the last eight following a 3-10 to 1-11 win over Donegal. Substitute Ailish Morrissey fired two goals in the space of a minute to turn the game in Galway’s favour, and she said there was a level of composure in the team after the restart.

“We were told to just compose ourselves at half-time,” said Morrissey. “Once Nicola (Ward) got the goal, at the start of the second half, it pushed us on.

“We can sit back now next week not having to rely on one or the other getting a result to suit us.”

Meanwhile, in Sunday’s TG4 Intermediate Championship action, Leitrim and Down became the first teams to qualify for the quarter-final stage after their respective wins over Clare and Louth in Sunday’s action.

Two goals from Michelle Guckian helped Leitrim to a 4-7 to 2-9 win over Clare which sealed top spot, while Aisling Cull goal meant Down ran out 1-6 to 0-7 winners over Louth.

In Group 1, Caitriona Murray’s late free gave Wexford a 0-7 to 0-6 win over Longford, but Westmeath’s 2-12 to 2-10 victory over Sligo means three sides are still in the fight to qualify from this pool.

The same applies in Group 3, after two goals each from Sarah-Anne Fitzgerald and Mo Nerney gave Laois a 4-11 to 2-15 victory over Kildare.

In the TG4 Junior Championship, Antrim needed extra time to claim their first win, but they were stylish 5-20 to 2-13 victors over Carlow. And in the second game Nicole Bennett’s late penalty was key as Limerick emerged 2-7 to 0-12 winners against Derry.