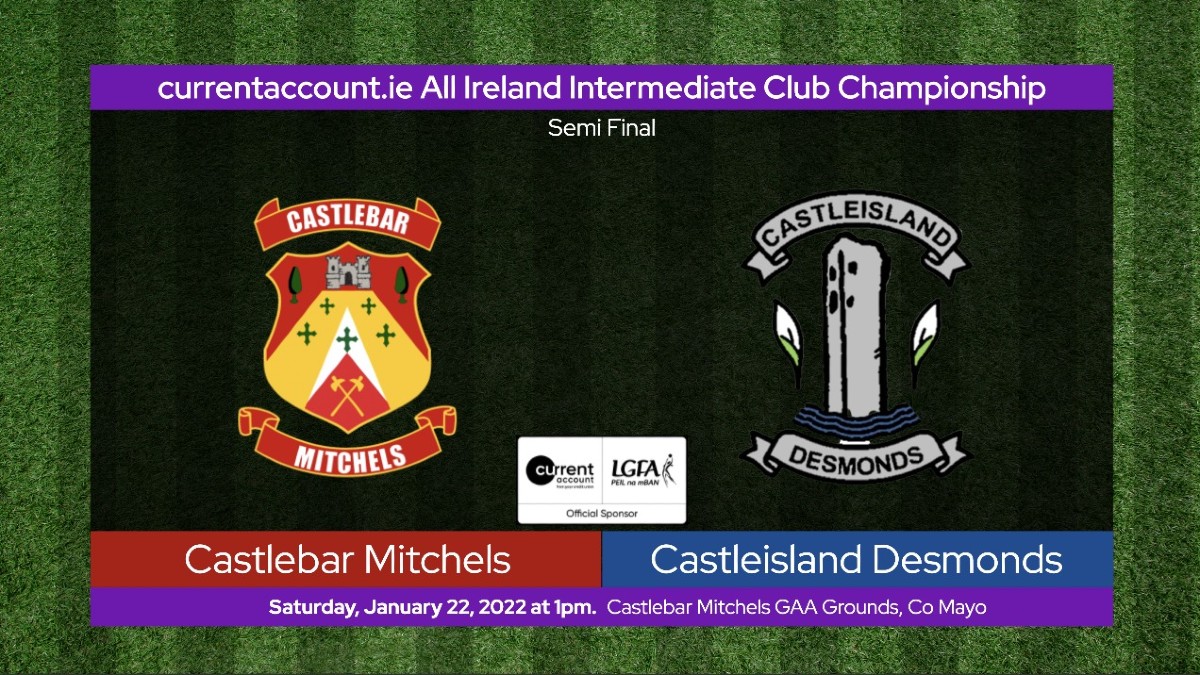 THE 2021 currentaccount.ie All-Ireland Ladies Junior and Intermediate Club Football Championship finalists will be revealed over the weekend – with the semi-finals in both grades down for decision.

The action gets underway on Saturday when Castlebar Mitchels, representing Mayo and Connacht, welcome Kerry and Munster champions Castleisland Desmonds to the West.

On Sunday, the second semi-final features Dublin and Leinster champions St Sylvester’s at home to Kinawley, the Fermanagh and Ulster standard-bearers.

Both Junior semi-finals are fixed for Sunday, with Mullinahone from Tipperary and Munster taking on Galway and Connacht visitors St Brendan’s, with John Lockes in Callan the venue for that one.

In the other semi-final, Dublin and Leinster’s St Judes are the hosts at St Margaret’s GAA, as Carrickmacross make the trip from Monaghan and Ulster.

All four games will have 1pm starts and are live on the LGFA’s Facebook Page: http://bit.ly/2OvUJ2D.

The winners will progress to the 2021 currentaccount.ie All-Ireland Finals, which are pencilled in for the weekend of February 5/6.

This clash will get the weekend’s action underway at Castlebar Mitchels on Saturday.

Mitchels, the reigning Mayo and Connacht champions, have former Fermanagh star Marita McDonald on board as coach – and she’s also sub-goalkeeper if required.

Orla Conlon, Danielle Caldwell and Kathryn Sullivan are well-known inter-county stars for Mitchels, who are captained from midfield by Lisa McMamanon.

Their Kerry opponents, captained by goalkeeper Fiona Griffin, have proven class in their ranks, too, including current county players Cáit Lynch and Lorraine Scanlon, who was a 2017 TG4 All Star.

Desmonds had to dig really deep to see off Limerick opponents Monagea in the Munster Final before Christmas, and they’ll need a big performance on their travels to match up to Mitchels, who were hugely impressive in their Connacht Final victory over Sligo’s Tourlestrane.

After coming through the challenge of London visitors Holloway Gaels at the quarter-final stage, St Sylvester’s have home advantage again for the visit of Fermanagh and Ulster Champions Kinawley.

Sylvester’s can call upon the undoubted talents of Dublin county stars Sinead Aherne, Nicole Owens, Kate Sullivan and Niamh McEvoy, who’s listed on the bench for this one, while Kim White has donned the inter-county colours of Down.

Kinawley have excellent players in their ranks, too, and county ace Roisin O’Reilly kicked a memorable winner in the Ulster Final winner over Steelstown, which capped a superb comeback.

Alongside O’Reilly at midfield is the vastly experienced Aine McGovern, who has also tasted All-Ireland Junior glory.

Sylvester’s will start as favourites but Kinawley will provide a stern test and cannot be discounted.

St Brendan’s from Galway were All-Ireland Intermediate semi-finalists in 2018 and are now in the last four of the Junior Championship.

There are plenty of survivors from that odyssey in their ranks still, while former county star Becky McPhilbin has made the transition from player to coach.

They were one-point winners against Eastern Harps in the Connacht Final and now face a Mullinahone team managed by Paul Kelly, Tipperary’s former All-Ireland winning hurler.

This game, while it’s a ‘home’ fixture for Mullinahone, will be played just a ten-minute drive away, at the home of John Lockes in Callan.

St Judes have been going great guns in both codes and their attention for this weekend is firmly set on a currentaccount.ie All-Ireland semi-final appearance.

St Judes put Tír na nÓg, the British champions from Newcastle, to the sword in the quarter-finals and now face a stiffer test from Carrickmacross, the Monaghan and Ulster champions.

Dublin camogie star Hannah Hegarty is a stand-out name on the St Judes team, while the Carrick ladies had Monaghan’s Sarah Capaldi to thank for their dramatic Ulster Final victory over Tyrone outfit Moortown.

Capaldi’s late free secured the win for the Farney County representatives, and the next step on their journey is a visit to the capital.