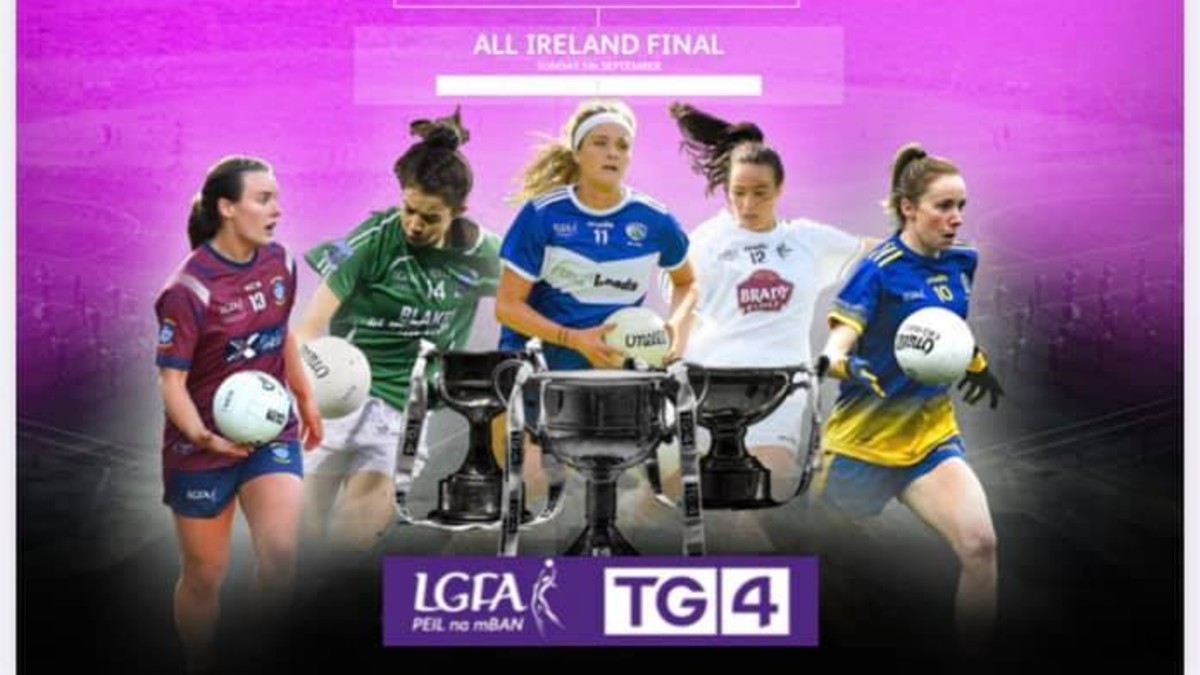 SEMI-final placings will be decided in the 2021 TG4 All-Ireland Intermediate Championship over the weekend – with the last-four picture in the Junior Championship also set to take real shape.

Down and Wexford meet at Donaghmore/Ashbourne on Saturday in the first of the Intermediate quarter-finals (3pm).

In the semi-finals, it’ll be Down or Wexford against the winners of Sunday’s Kinnegad clash between Laois and Louth (2pm).

In Sunday’s two other quarter-finals, Kildare take on Leitrim in Ballinasloe, while Clare clash with Westmeath at Tuam Stadium.

Both games have 2pm throw-in times and the winners of these matches will be paired together in the semi-finals.

In the Junior Championship, we’ve reached the penultimate round of group fixtures.

Antrim and Wicklow meet in a top of the table clash, while Carlow take on Derry.

All of the weekend’s game are available to view at the LGFA and TG4’s dedicated Championship portal https://page.inplayer.com/peilnamban/

All games at 2pm unless stated

TG4 All Ireland Intermediate Quarter-Finals – Result on the Day

Down claimed victories over Louth and Offaly to top their group and progress to the last eight.

Their opponents are Wexford, in-form and rejuvenated under the guidance now of Lizzy Kent.

In the four-team group, Wexford finished second behind Westmeath and are through to the quarter-finals on merit.

Natasha Ferris is in a rich vein of scoring form for Down, with 2-13 in the championship to date, while Wexford’s Catriona Murray is leading the way for the Model County with 0-13.

The winners of this game will progress to a semi-final clash with Laois or Louth.

Clare, on their day, are capable of posing problems for any opponent in the Intermediate grade – and this is a dangerous tie for Westmeath, who are rated by many as favourites for the title outright.

In a high-pressure game, Clare got the better of last year’s Junior champions Fermanagh to make it through to the quarter-finals, securing second place in the table behind Leitrim.

Westmeath topped their group but they had to work hard for it – recovering from an opening day loss to Longford to score victories over Sligo and Wexford.

Sarah Dillon is the third highest scorer in the country across all grades with 3-13 to date for Westmeath, while Niamh O’Dea has collected 2-10 to date for Clare.

Leitrim topped Group 2 with wins over Clare and Fermanagh to book a safe passage to the quarter-finals.

They’ll face Kildare in the last eight, with the Lilywhites coming through in second place behind Laois in Group 3.

A four-point victory over Roscommon in Round 1 was good enough for Kildare and Neasa Dooley has been in excellent form, with 2-8 to date in Championship 2021.

Leitrim’s Laura O’Dowd is her county’s leading scorer with 2-2 – and this should be an intriguing tie between two teams who will harbour genuine title ambitions.

It’s Clare or Westmeath in the semi-finals for the winners of this tussle.

An interesting Leinster derby pits an emerging Laois side against Louth, the Lidl NFL Division 4 winners.

Laois beat Kildare and Roscommon to finish on top of Group 3, and they’ll fancy their chances of taking another step forward in the competition.

But Louth are a decent outfit and after losing by just two points to Down, they booked a knockout slot with an eight-point win over Offaly.

A semi-final with Down or Wexford awaits the winners of this one, and Louth will look to the scoring prowess of Kate Flood, Laura Collins, Niamh Rice and Lauren Boyle in their bid for a last-four slot.

Mo Nerney has carried her League form into the Championship, with 2-10 registered from the group stages for Laois.

Antrim lead the way on scoring difference and in their final game of the group stages, they’ll be anxious to finish this phase of the competition on a high.

With first playing fourth and second playing third in the semi-finals, there’s a real incentive to finish on top of the pile.

And that should bring a real edge to proceedings in Mullahoran, as Wicklow aim to maintain their 100 per cent record to date.

Antrim’s forwards have been scoring freely to date, with Cathy Carey leading the way on 1-13, while Marie Kealy is Wicklow’s leading scorer with 0-13.

Carlow are currently bottom of the pile and pointless after two games.

The Barrowsiders could do with a positive result against Derry but even if they don’t win, they could still book a place in the semi-finals from their final outing against Limerick next weekend.

It’s still tight in the race to claim the four semi-final spots on offer in a five-team round robin group – and this is another pivotal fixture.

Derry have one win from two games and another victory here would see the Oak Leafers safely through to the last four.

Carlow forward Clíodhna Ní Shé is the leading scorer in the Junior Championship with 4-6, while Emma Doherty has 0-7 to date for Derry.