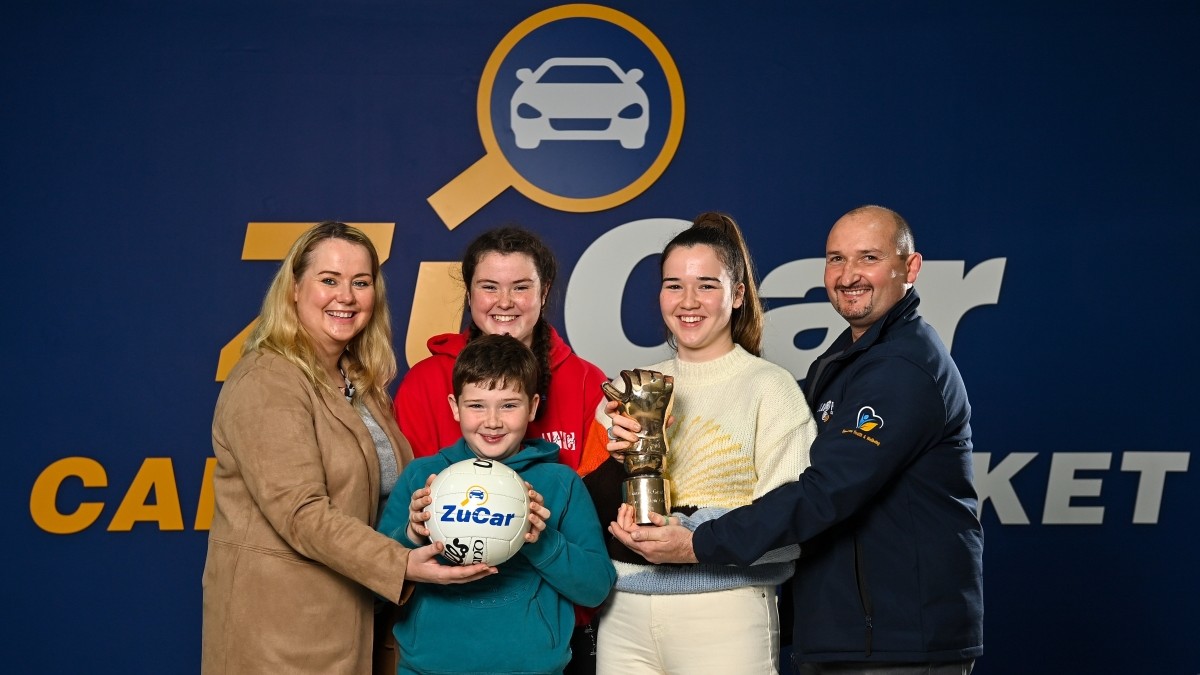 Riane McGrath was the talk of Longford town even before she claimed the ZuCar Golden Glove Award. Her proud parents, Martina and Andy, had put the word out about her nomination.

“Mam and Dad printed out posters and sent them around the whole town. They were up in all the shops, bars and restaurants,” said McGrath.

The 18-year-old was still shocked when she found out that she had picked up the inaugural award.

She landed almost a third of the public vote with 1,042 of the 3,347 cast, with Tipperary’s Lauren Fitzpatrick finishing second.

“I was in school and my mam texted me to ring her when I got a chance. It was about ten o’clock one morning. She just told me that I had won, and I was delighted.”

McGrath had also fended off the challenge of Meath’s TG4 All-Ireland winning custodian Monica McGuirk. The Royals shot-stopper is actually one of mum Martina’s favourite players.

But Riane’s hero when she was young was Stephen Cluxton and she spent her childhood looking up to the former Dublin captain, so it was no surprise that she opted to be a goalkeeper as well.

“Dad was always like; ‘Look at him up taking the frees, Riane, you should be doing that.’ I could try to do that but it’s too much pressure sometimes so I would prefer not to,” said McGrath.

But it was McGrath’s sublime reflexes that made the difference for Longford in their TG4 All-Ireland Intermediate Championship relegation play-off.

It was a frantic finish in the boiling heat of Mullahoran on Saturday 28 August when Fermanagh came with one late surge in an attempt to preserve their intermediate status for another year.

Joanne Doonan was their chief-scoring threat all year and when she burst through on goal with time almost up, it looked like there would only be one outcome.

She got power and accuracy but somehow the shot never found its way past McGrath in the Longford goal. Instead, it was a remarkable save from someone who craves the fleeting moments.

“I like problem-solving in school, maths is my favourite subject,” said McGrath.

“And my favourite part of being a goalkeeper is the shot-stopping, I love having to think fast and closing down players.

“I practise mainly with the three-man weave. People are coming at me and I have to decide in that moment which player to go to because the three of them would be closing in, which would be realistic in a game.

“That would be my best way to practise the shot-stopping.”

But she couldn’t in her wildest dreams have pictured a more perfect scenario than Doonan’s potential game-charger being thwarted by her with seconds remaining.

“In that moment, I was like, oh my God, I have to save this, I better save this,” said McGrath.

“I like when it’s a quick burst, like if someone is coming at me real fast. If I think about it for too long it’s harder to make the save. It was going into the top corner of the left-hand side. It was just inside the post but I saved it and it went out for a ‘45.

“It felt unreal actually. I was just delighted. All the players came around me and patted me on the back. They knew the importance of the save. It felt class at the time.

“I would be the youngest on the team and it showed I deserved my place.”
But once McGrath came back down from the elation of saving her county, she had to switch focus and turn her attentions to a completely different battle.

In 2022 she will undertake her hardest fight yet when she attempts to get the required points in the Leaving Cert to go on and study medicine.

Covid-19 swept through Ireland while McGrath was in Transition Year at Meán Scoil Mhuire in Longford town, meaning she never got a full appreciation for her various work experiences as a vet, a pharmacist and working in the county council.

Now her day-to-day school life involves pods of 20-students, no more, and mask-wearing to ensure the health and safety of all.

And while she continues to try and live the normal life of a Leaving Cert student she has to prepare herself for the mock exams and the HPAT in February.

“I am interested in doing medicine, whether I get the points or not it’s a different story but that’s what I want to do,” said McGrath.

“We have to sit the exams this year. They are slightly altered to make it a small bit easier so there is more choice on the exams. But we have to sit it, the State Examinations want actual exams they don’t want predicted grades. I would like the option.”

And this time next year McGrath hopes to be studying in UCD or NUIG but there’s a lot of water to pass under the bridge in the meantime within her own life and with Longford.

She actually lives across the Roscommon border in Kilglass, but her parents are from Longford and that’s where her loyalties lie.

And although her team had to battle for their survival this year they know they aren’t far off, considering they beat the eventual TG4 All-Ireland Intermediate champions Westmeath, earlier in the year.

“We went into the Westmeath game thinking that we were good enough to beat them and we did,” said McGrath.

“But it just went downhill from there. I think we were way better than what we performed. We should have beaten Wexford and then it would have been a totally different story, if we had beaten them and Wexford we would have been way higher up in the group.

“It was very annoying watching the final because in the background you are like, we beat that team. We were capable of beating that team and we were down in relegation and they were up winning the intermediate.”