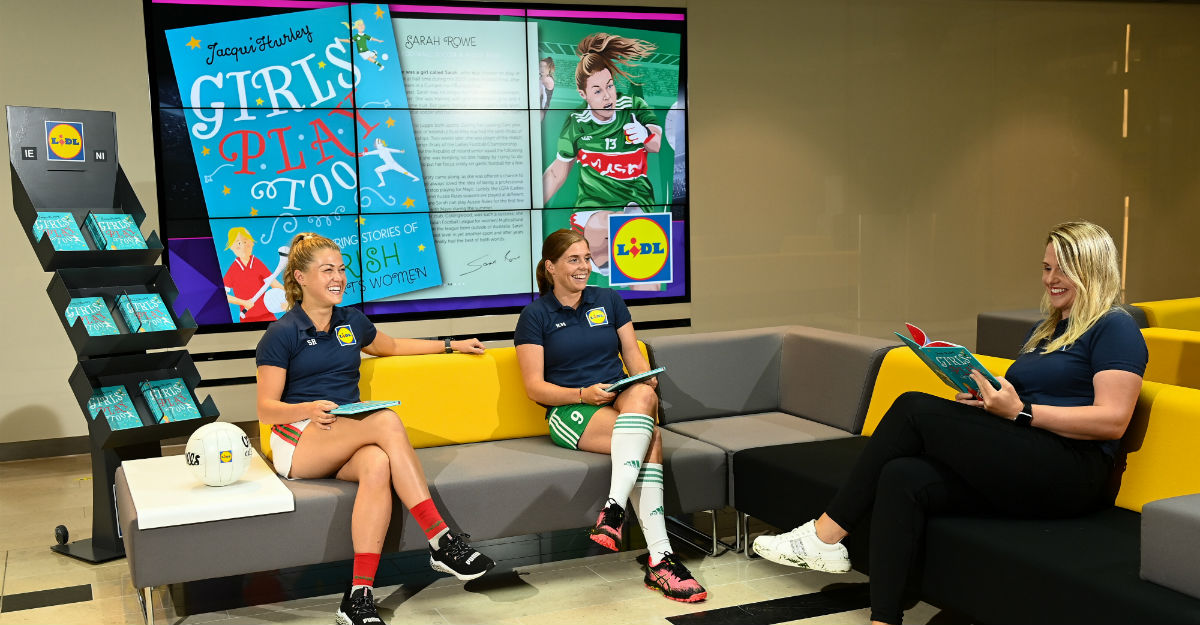 Lidl Ireland demonstrate their continued commitment to women in sport by announcing an exclusive sales period for ‘Girls Play Too: Inspiring Stories of Irish Sportswomen’, the first ever collection of stories about Ireland’s most accomplished sportswomen.

Teaming up with RTÉ sports broadcaster and the book’s author, Jacqui Hurley, Lidl Ireland have confirmed that the highly anticipated book is initially on sale exclusively in the retailer’s 202 stores across the island of Ireland from Thursday, 20th August at the great price of €12.99/£9.99.

‘Girls Play Too’ tells the stories and celebrates the careers of 25 of Ireland’s best-known female athletes and aims to inspire the next generation of Irish sportswomen.

Authored by RTÉ Sports Broadcaster, Jacqui Hurley and vividly illustrated with original drawings by five Irish female artists, the book provides an insight into how each of these women have turned their sporting dreams into reality.

The book forms part of Lidl’s commitment to supporting and championing women in sport, as demonstrated by their partnerships with the 20×20 campaign and Ladies Gaelic Football Association (LGFA), and follows on from the recent ‘No Proving. Just Moving.’ campaign which saw the ‘Lidl Moves for 20×20’ microsite created to encourage and support women of all ages, abilities and backgrounds to be physically active. In addition, Lidl initiatives such as the #SeriousSupport Schools Programme and One Good Club™ Youth Mental Health and Wellbeing Programme are aimed at supporting the LGFA at all levels of the game. The partnership with the LGFA has seen Lidl invest over €4m in ladies Gaelic football since its inception in 2016.

Speaking at the launch of the exclusive sales period, Author and RTÉ sports broadcaster Jacqui Hurley said; “I had been thinking about doing a book like this for a while. I really wanted to do something tangible as part of my pledge to support the 20×20 campaign and I felt a book for young girls would be perfect. I believe this is such an important age group in developing attitudes towards sport and I think ‘Girls Play Too’ can have a positive influence on that. The book is called ‘Girls Play Too’ and really that’s the message I want them to take from it – that sport isn’t just for boys. Gender is no longer a barrier to sporting success and, if anything, the last decade has shown us that women’s sport is getting stronger year on year. Thank you to Lidl for backing this project and for always keeping women in sport on the main agenda.”

Speaking about the project, Senior Partnerships Manager for Lidl Ireland, Joe Mooney said; “Through our partnerships with the Ladies Gaelic Football Association and the 20×20 women in sport campaign, we have seen and heard all the barriers that exist for girls and women in a sporting landscape dominated by male sport. The high dropout rate for girls as they move towards adulthood is a particularly worrying trend and one that we are trying hard to reverse through our #SeriousSupport Schools Programme with the LGFA and the wider 20×20 campaign. We believe in giving the female sporting heroes of today a platform so they can inspire the heroes of tomorrow and ‘Girls Play Too’ is the perfect place to tell their stories.”

Keep an eye out on SportsDaz for an interview on our Podcast with Jacqui Hurley in the coming weeks.