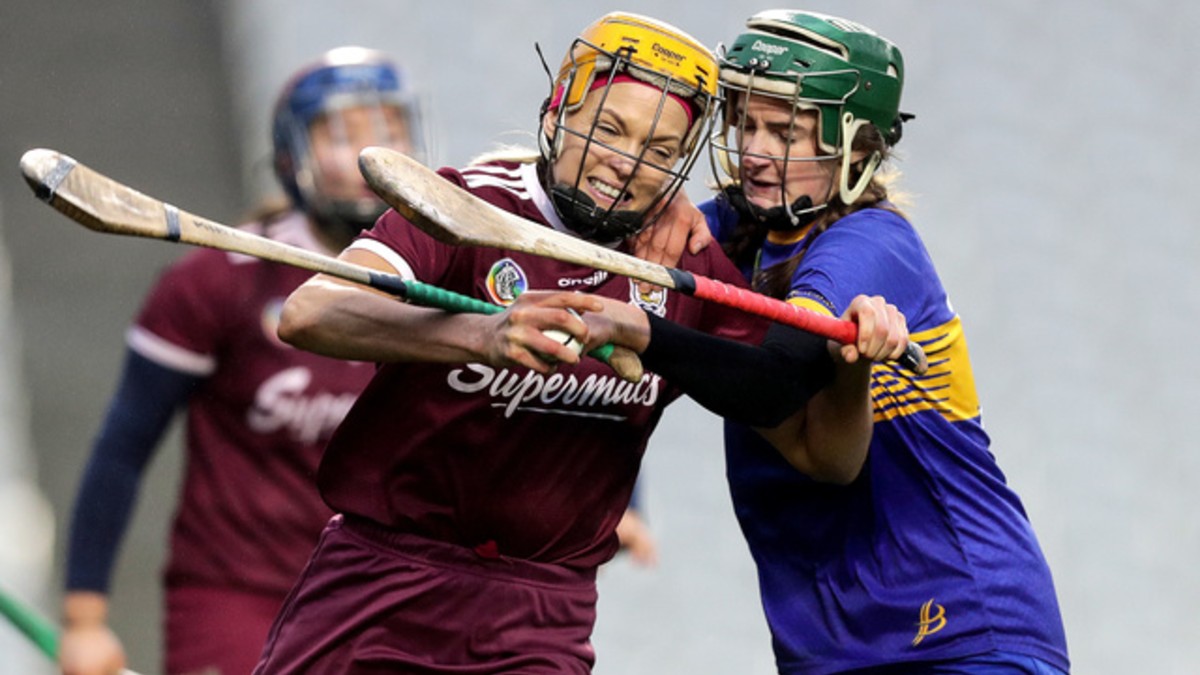 A 15th minute goal by Carrie Dolan gave Galway the breathing space they seemed satisfied with as they held Tipperary at bay to set up a repeat of last year’s Liberty Insurance All-Ireland Senior Camogie Final against Kilkenny.

Cathal Murray’s crew prevailed on that occasions with a rollicking display of attacking intent that they weren’t able to replicate on this occasion.

The weather conditions were far more difficult of course but significant credit must go to Tipperary, and while it might not be scant consolation at this early stage, the impression that the Premier have improved considerably this year was confirmed with a performance of absolute stubbornness and determination.

Bill Mullaney’s outfit matched the renowned work rate of Galway and when one thinks of how short they had fallen in Semi-Final appearances the last two years, and that they were without the injured Nicole Walsh, Aisling Moloney and Ereena Fryday, and Orla O’Dwyer who is in Australia preparing for the AFLW season, their competitiveness was noteworthy.

That said, Galway were always in control once Dolan goaled, and their physicality and pace in attack made them a greater scoring threat throughout. At the other end of the pitch, skipper Sarah Dervan served up the customary colossal full-back performance for the champions.

Niamh Hanniffy had a point in the second minute for the champions but Tipp were probably the better team in the opening quarter and points from Róisín Howard and the first of six from Cáit Devane gave them the lead.

That goal arrived just before the first water break though, a combination of Ailish O’Reilly and Orlaith McGrath setting up the half-forward, who rode a challenge before finishing from close range.

Tipp did have a golden chance of responding in kind in the 20th minute, when Fryday found Howard with a drilled stick pass but the Cahir attacker failed to get the necessary connection on her shot from inside the 13 and Sarah Healy made the stop.

Niamh Kilkenny and Rebecca Hennelly pointed after that for Galway, with Devane slotting a pair of frees, the second of which should have been a penalty when Fryday was pulled down off the ball inside the large parallelogram.

Áine Slattery made a brave point-blank save from Ailish O’Reilly just before the break and it was 1-6 to 0-5 with all to play for.

Points from the always dangerous McGrath, Dolan (45) and McGrath again established a seven-point lead and that always felt like it would be sufficient.

Fryday flashed a shot over after a tremendous surge from Niamh Treacy and Devane slotted a free but Galway were defending stoutly and Tipp just lacked the attacking guile to find supporting colleagues in offensive positions.

Galway were able to bring on some real talent from the bench and Slattery saved Healy’s penalty after sub Siobhán McGrath was fouled, and the Sarsfields sharpshooter also slotted the resultant 45 after having a rasping shot stunningly deflected around the post by the Tipperary net minder once more.

When McGrath opted to take a point from another penalty, it was indicative of the control Galway had on proceedings and they ran out deserving winners.