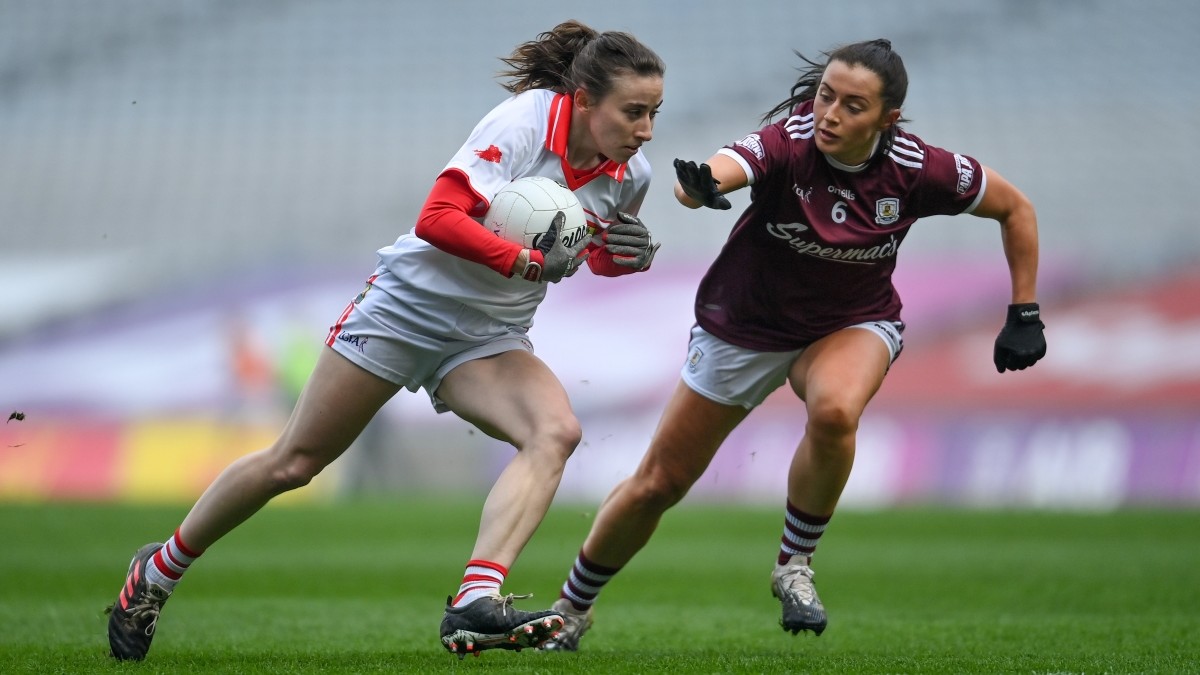 (Melissa Duggan of Cork in action against Charlotte Cooney of Galway during the TG4 All-Ireland Senior Ladies Football Championship Semi-Final match between Cork and Galway at Croke Park in Dublin. Photo by Ramsey Cardy/Sportsfile)

With the game switched from Parnell Park to Croke Park at short notice due to an unplayable pitch at the Donnycarney venue, it was Cork that bossed the first-half and Duggan’s seventh minute goal put them on the road to victory.

Tracey Leonard tried her best to keep Galway in touch, but when Ciara O’Sullivan raced through the centre to score Cork’s second goal 12 minutes from the interval, it was a long road back for Galway.

Orla Finn kicked nine points for Ephie Fitzgerald’s side, who were never in danger of losing this game, despite the efforts of Mairéad Seoighe and substitute Andrea Trill for Galway.

Galway took the lead in the second minute when Tracey Leonard scored from a free, having missed a similar effort 30 seconds earlier.

Cork soon equalised with Finn scoring her first free, but with seven minutes gone they took the lead. It came through a combination many wouldn’t have expected as a brilliant run from wing back Erika O’Shea – which started in her own half – played in another half-back Duggan and she coolly slotted to the net.

Leonard pulled a point back from another free, but two scores from Ciara O’Sullivan and another Finn free, saw Cork lead 1-3 to 0-2 at the water break.

Within a minute of the restart Cork had their second goal, as their pressure on the Galway kick-outs began to tell. Áine Terry O’Sullivan won possession and she played Ciara O’Sullivan in to make it 2-3 to 0-2, with Cork dominant at this stage.

A great point from distance from Seoighe reduced the deficit, with Finn replying from another free at the other end for Cork.

Seoighe pointed again, another long-distance effort, to make it 2-4 to 0-4, but right on the hooter Finn got her fourth free to see Cork in control at half-time as they led by seven points.

Ciara O’Sullivan increased Cork’s lead at the start of the second-half, but two Leonard frees reduced the deficit again.

Leonard, with her first from play, and half-time substitute Trill kept Galway’s tally moving, but with Eimear Kiely also on target for Cork the gap wasn’t getting any smaller.

Olivia Divilly and Finn exchanged points, but with 13 minutes remaining Galway were dealt another blow when Sinead Burke was sin-binned for a tackle on Libby Coppinger.

While Trill pointed again for Galway there was to be no miraculous comeback, while late points from Finn, Sadhbh O’Leary and Marie O’Callaghan saw Cork run out comfortable winners, as they now face a final against Dublin on 20 December.