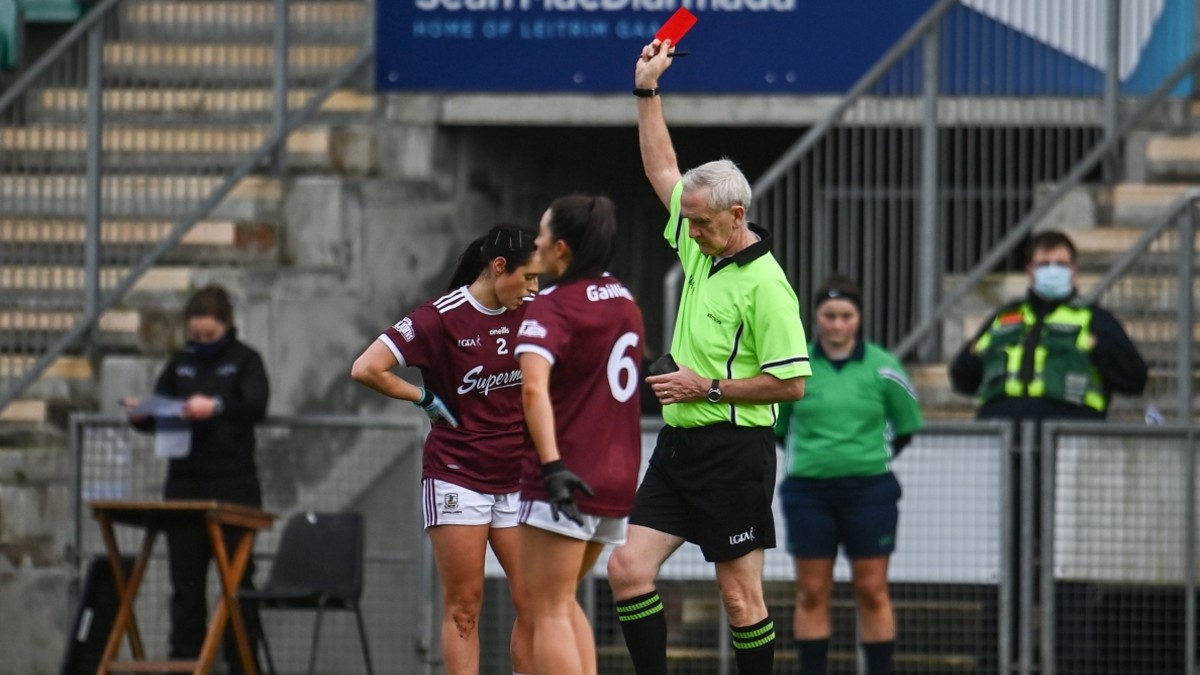 (Galway No. 2 Fabienne Cooney is shown a red card by referee Mel Kenny during the TG4 All-Ireland Senior Ladies Football Championship Round 3 match between Galway and Monaghan at Páirc Seán Mac Diarmada in Carrick-on-Shannon, Leitrim. Photo by Sam Barnes/Sportsfile)

2019 All-Ireland finalists Galway, who were reduced to 14 players late in the first half, survived a late scare from Monaghan to win this absorbing Group 2 TG4 All-Ireland Senior Championship tie and qualify for an All-Ireland semi-final with Cork.

With both sides winning their respective opening round fixtures against Tipperary, this was, in essence, an All-Ireland quarter-final, which Galway were in control of for most of the game – that was until Monaghan struck for three goals in the final quarter at Pairc Sean MacDiarmada in Carrick-on-Shannon.

Galway started the brighter, with Tracey Leonard (free), Olivia Divilly and Louise Ward helping their side into a 0-3 to 0-1 lead, but Monaghan soon settled as the outstanding Ellen McCarron, who tallied 2-7, and Cora Courtney levelled up the match by the tenth minute.

The frenetic opening to the contest continued. Divilly and Leonard (free) exchanged points with McCarron and Rosemary Courtney before Monaghan edged in front for the first time after the first-half water break through another McCarron point.

However, Galway suffered a set-back just before half-time when an altercation between Monaghan’s Muireann Atkinson and Galway’s Fabienne Cooney led to the latter’s dismissal by Mayo referee Mel Kenny.

Early in the second period, Monaghan introduced Ciara McAnespie, but she lasted only a minute as she was forced to retire again with the injury that kept her out of the starting line-up.

As it was, the Tribeswomen had the best of a cagey third quarter, outscoring their opponents 1-1 to a point. Leonard (free) and McCarron traded points, but then Leonard put Ward through on goal on 43 minutes and the Galway captain made no mistake with her finish.

Leading 1-11 to 0-7 heading into the final quarter, Tim Rabbitt’s charges were coasting – even more so when Lucy Hannon extended their lead shortly afterwards.

Yet, in the ensuing minutes, the contest hit another level as Monaghan netted three goals, Therese McNally-Scott and McCarron (2) reducing the deficit on three occasions.

On each time, though, Galway answered with a score; the most crucial of these was a well-worked goal from Lynsey Noone on 56 minutes.

With time left on the clock, McCarron hit Galway for 1-1 to reduce the margin to one and, although McCarron also had chances to goal and point late on, Galway held out to qualify for an All-Ireland semi-final meeting against Cork in three weeks’ time.