LADIES FOOTBALL: ‘I don’t think anybody would expect to be winning All-Irelands in December, but we’ll take it anyway’ – Fermanagh’s Courteney Murphy 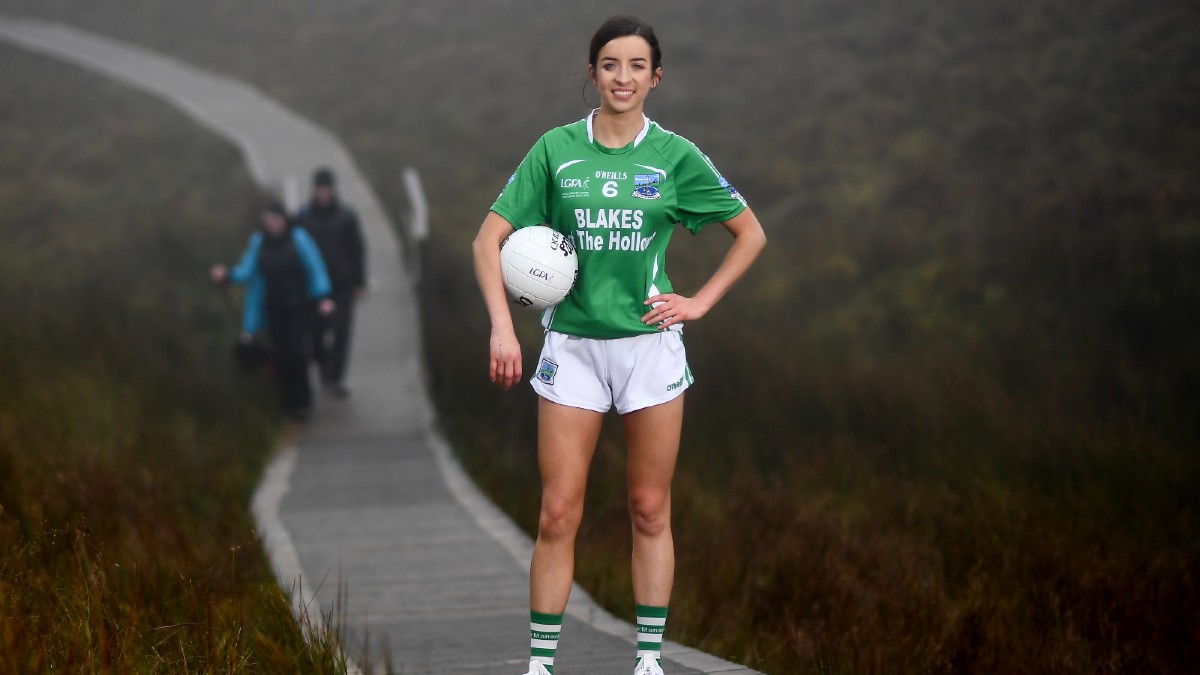 (Fermanagh captain Courteney Murphy pictured at Cuilcagh Boardwalk Trail ahead of next Saturday’s TG4 All-Ireland Ladies Junior Football Championship Final. The 2020 Junior Final will be contested by Fermanagh and Wicklow at Parnell Park in Dublin – throw-in time 4pm. The game is available to view live on TG4 and worldwide on the TG4 player: http://bit.ly/37oJ7a1 #ProperFan. Photo by David Fitzgerald/Sportsfile)

Fermanagh Ladies Football captain Courteney Murphy remains hopeful that she will be fit to lead her side out against Wicklow in Saturday’s TG4 All-Ireland Junior Championship Final.

To date Murphy (23) has only played an hour of Fermanagh’s Championship campaign after injuring her hand just after half-time of their opening round game – also against Wicklow – but after watching from the sidelines as her side got back to winning ways, she is determined to play some part at Parnell Park.

“The last fortnight it has been a wait and hope game, but I’m kind of hopeful that I will get some involvement anyway,” said Murphy, who lined out at centre back in last year’s Junior final.

“It’s a bit of a knock to the hand I picked up against Wicklow the first day. I had to sit out the Carlow and Limerick games. Obviously it was a bit of a tough watch from the sidelines, so I’m hoping that come Saturday, that I will be able to play.

“I’ve been running about, it’s just the hand. It’s just a wait and see thing and hopefully come Saturday I’ll be able to get it strapped up and I’ll go out.”

After losing their opening game to Wicklow by 0-9 to 1-2, Fermanagh needed to beat Carlow to progress from Group A, while their 4-10 to 4-3 victory over Limerick in the TG4 All-Ireland semi-final means Murphy has a chance to make her comeback.

But even if she is not called upon by manager Jonny Garrity, she is desperate to help her side go one better than last year’s final defeat to Louth.

“It was really frustrating. But you just have to look at it in an optimistic kind of way and put your own worries to the side.

“On the day what can I do for the team? If that’s from the sidelines I constantly need to be giving encouragement. I might not be able to lead them from the pitch, but whatever I can do from the sideline that’s just my focus to help the team.

“After the disappointment of last year, it’s motivation for this year. If we were to atone for that then that’d be great way to finish the year. I don’t think anybody would expect to be winning All-Irelands in December, but we’ll take it anyway.”

Fermanagh’s opponents, Wicklow, are unbeaten to date in this year’s competition, and following their relegation from the Intermediate grade in 2019, they have been pointed to as the team to beat from a long way out.

According to Murphy, Fermanagh will aim to stifle Wicklow’s in-form forwards and show their own attacking prowess.

“They’re a very physical team. I think you can expect that when you are coming from Intermediate. They are going to be tough.

“Unfortunately, we didn’t play them in the league this year. It was one of our last two games that were called off because of Covid.

“We knew they were going to be strong, especially in their full-forward line, they are good shooters up there. And even their ball carrying skills around the middle and their half-backs attacking. We know they are powerful up front and they can do damage.

“We expect the same on Saturday, but hopefully we will be able to hold them out and play our own attacking game then.”