LADIES FOOTBALL: I Don’t Think My Mum Could Watch Me Really. She Stayed In The Car And Just Watched From A Distance That First Day Back.’ – Armagh’s Aimee Mackin 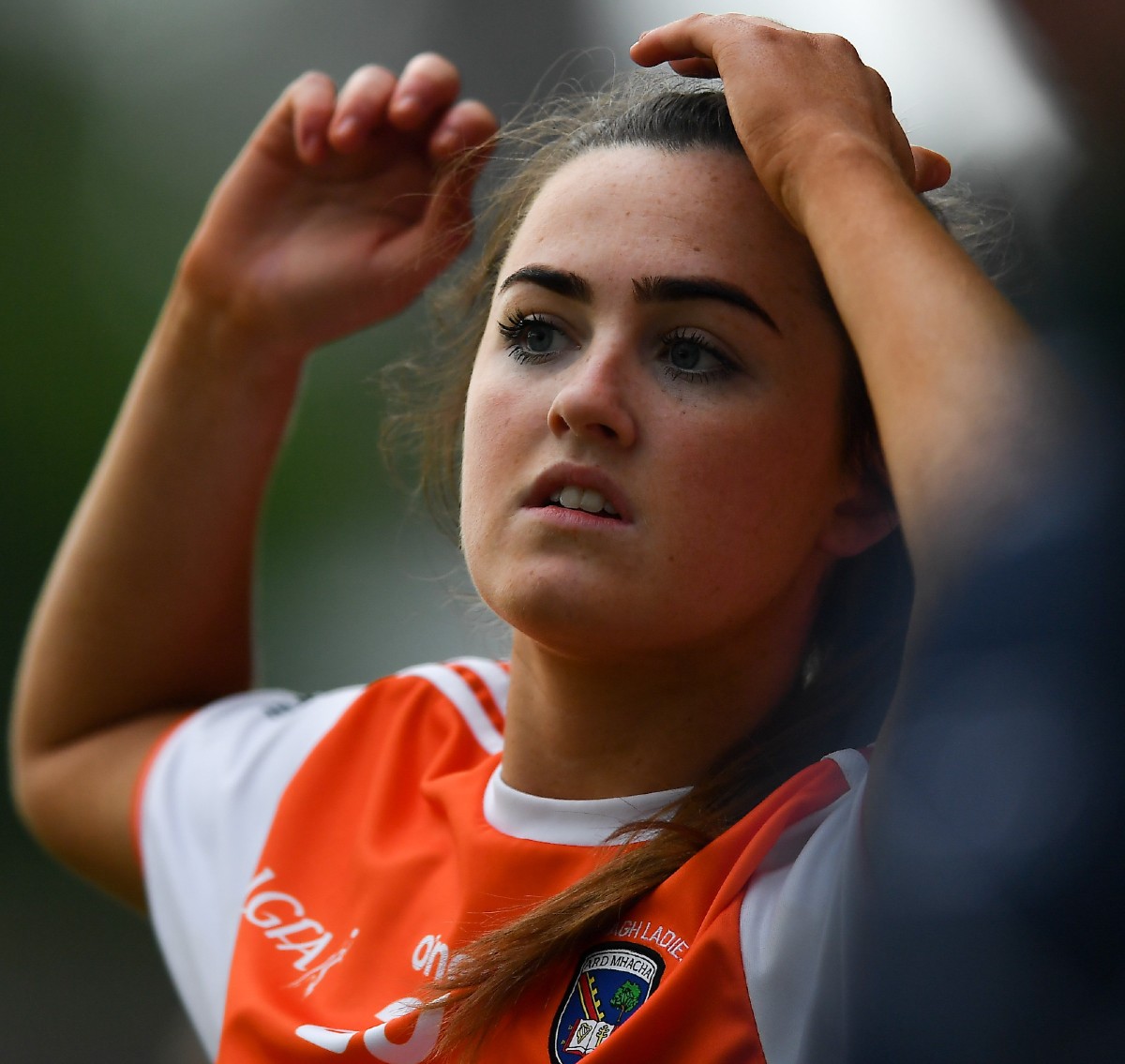 Shortly after 3pm at Parnell Park today (SAT), Armagh and Mayo will fight it out for one of three remaining places available in the TG4 All-Ireland Senior Championship semi-finals, and sisters Aimee and Bláithín Mackin will be central to the Ulster side’s hopes.

About 120km away, and two hours earlier, in Cavan town, the Armagh men’s team take on Donegal in their Ulster Senior championship semi-final, where two of the Mackin brothers – Connaire and Ciaran – will be playing their part in Kieran McGeeney’s Armagh panel.

With supporters not permitted into either game, the rest of the Mackin clan will tune in to both games back home in Camlough, which should make for an afternoon of potential highs, lows, joy and despair.

“It’ll be an intense day for them,” says 23-year-old Aimee Mackin, who will draw much attention from the Mayo defence today.

“Obviously it’s very nice to play with your sister and we have been playing together for a long time. We know each other well enough now. It’s nice for the family as well at home. It’s a busy household.”

Victory today would be extra special for 2015 and 2017 All Star Aimee, considering she missed out on last year’s All-Ireland quarter-final between the teams through injury, which Mayo won by three points. A fortnight earlier, Armagh had defeated Cork, a landmark victory for the county, with younger sister Bláithín named player of the match.

But the day was tinged with mixed feelings for Aimee, who sustained cruciate knee ligament damage.

“The Cork game was mixed emotions for me, but I was delighted to see us beating them. It’s such an historic team to come up against, and to get a win against them was something that was massive for us, for our county.

“After the game, I came down to congratulate Bláithín, we were in the huddle and I didn’t see her. I was wondering where she was and then someone told me she got player of the match. I was delighted for Bláithín; it was probably her best game for us. She really stood up when the team needed her; she has improved over the last few years and come into her own in the county set up.

“Then, going in against Mayo in the quarter-final, it was a very tough game, but I thought we held our own for periods of the game and we were unlucky not to get the win. This one will be the same story, but they will be a lot tougher this weekend, I’d say.”

Watching her county slip to a one-goal loss to Mayo was made all the harder considering Aimee had just received the diagnosis of her knee injury.

“I just was changing direction before half-time (against Cork) and I felt like a crunch in my knee. At the time you don’t really know what’s happened, because I had never experienced something like that.

“I was very hopeful that it wasn’t anything too serious, but then a few days later I got the news that…it wasn’t the best of news. You just have to get on with it, not much is going to change at that point.”

In any other year, Aimee’s parents, Freda and Mick, would have a horrible decision to make today. Do they head off to Dublin and support the girls, or would Kingspan Breffni be their destination for the men’s game?

Covid-19 restrictions mean they have been saved from that choice – but robbed of a great day out. But even when supporters were welcome, Aimee’s mother couldn’t bring herself to watch as her daughter tip-toed back into competitive football action.

After a year out, a 20-minute cameo for her Shane O’Neill’s club against Grange was an emotional return for Aimee, but for Freda it was a frightening experience watching through her fingers.

“I think there were more nerves from my parents. I don’t think my mum could watch me really. She stayed in the car and just watched from a distance that first day back.

“I think in general she’d be a nervous type watching our matches, but I think that first game back didn’t maybe do her any favours. But she was glad to see me get over it too.

“From my point of view, there was a wee bit of nerves, but throughout the whole rehab process you are thinking twice about how you might come back, will you be the same? You do have those thoughts, it’s normal. But I think once you put in the work, you know you are ready for it. It sort of makes it a little bit easier for you.

“That first game back, I felt good; I was ready for it; I was prepared; I had done a lot of the work beforehand to get me ready for that 20 minutes. It was just a matter of getting over that first hurdle, and once that first game, the first tackle and the first run is done, it’s not so bad after that.”

It has been smooth sailing for Aimee since that comeback in August – she scored eight goals in 30 minutes in her second game against Crossmaglen Rangers – and although her club championship hopes were ended at the semi-final stage, Shane O’Neill’s recently had a first Armagh senior league title to celebrate.

An Ulster championship meeting against Tyrone and an All-Ireland Group 4 tie – also with Tyrone – have since seen Aimee return to her best form on the inter-county scene, which has been recognised by the WGPA, who named her as October’s player of the month earlier this week.

She’ll add that award to the collection of medals and trophies the sisters have collected over the years, but it is the pursuit of team honours that drives her.

“I suppose I’m happy enough, but I care more about how the team performs rather than how I perform. As long as we are getting the wins, that’s all that really matters. I am happy enough with our performances so far, but I think we still have a lot to improve on yet.

“I’m not really focusing on personal awards really. We are just focused on this game. Mayo are a solid team, probably one of the best in the country at the minute. It’s a tough one for us, but that’s what you are going to get this stage of the competition.

“You see the score Mayo racked up against Tyrone [4-17 to 0-4] so it’s something we need to look at. We’ll just go and try our best and see how we get on.