LADIES FOOTBALL: ‘I’m just so lucky, I have all my teeth and both my eyes.’ – Wicklow’s Meadhbh Deeney 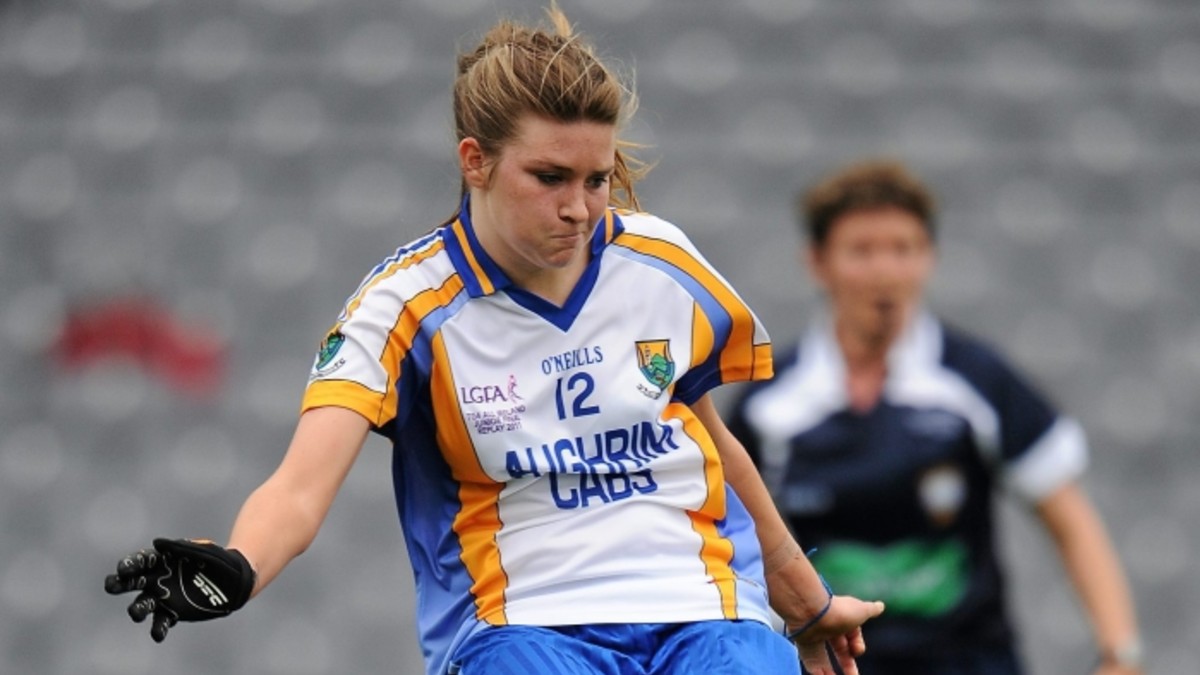 The challenge of maintain their fitness levels kept Meadhbh Deeney and her Wicklow teammates on their toes during the summer lockdown, but the Thomas Davis attacker is just thankful that she’s still around to line out in her side’s TG4 All-Ireland Junior Championship Semi-final against Antrim tomorrow (Sunday).

A talented soccer player, Deeney has always challenged her sporting abilities away from Ladies Football, but an horrific biking accident in May put her all of her 2020 aspirations in doubt.

“I was mountain biking up in Kilpedder (in the Wicklow Hills) that day. It was a bad old fall. I was so lucky. I really scratched up my face but I only have two small scars now. I took a chunk out of my knee too, but I’m fully back now, so I can’t really complain.

“I was very lucky. Thankfully I was wearing a helmet, and I probably wouldn’t be here if I hadn’t been.

“It is very scary. I had no clue what was going on when it happened, so I think that was probably for the best. I didn’t even see the cut on my knee or anything. I had a concussion and everything; it was a really bad fall.

“It was pretty tight for me coming back. I missed the first round of the club championship because of it. I didn’t have clearance until the week of our first game so I was trying to get back fit.

“That was a setback for me personally. It was a bit of a journey then to get back. Even now getting back on the bike…it’s been tough. I was doing the turbo trainer for ages just trying to work up to it.

“But I knew the feeling after playing with the girls in Division 3. I knew that I wanted to get back to that and to that level fitness. I worked so hard to do that, and I knew every other girl on the team was doing the same thing. I’m just delighted that I could get back in in enough time to be okay for county.”

Following her move to Dublin club Thomas Davis from her native Éire Óg, Deeney has been in excellent form for the Wicklow county team. It must have been a relief for manager Mark Murnaghan to have her back in the fold in time for the Championship, and as joint top scorer with 2-10 after two games; he has a real scoring weapon on his hands.

Deeney won a TG4 All-Ireland Junior title back in 2011 alongside her sister Caoilfhionn, but the county had to plan without her for a five-year block since then. The talented attacker accepted a scholarship to play soccer with Savannah College, Georgia in the US, where she studied Film and Television Production.

Back in Ireland since 2018, the award winning film-maker has returned to the Ladies Football fold and has even managed to merge her love of film production with that of sport.

“Playing in the US was brilliant. I left home when I was 18 and went over on a soccer scholarship for five years. I was a full-time athlete basically. We trained for at least two hours every day; we were going weights, learning about nutrition and everything. It was a great experience. I had the time of my life really, so far.

“When I came home in 2018 I started back with Wicklow. And that’s when I linked up to work with Fifty-Three Six. We’re a digital marketing agency and produce sports marketing campaigns for our customers. It’s a great job, I love it. It suits me down to the ground too.

“No day is the same, and they are excellent about me playing sports as well. Last weekend we were shooting on the Sunday, but I had training that morning. With it being Championship week they insisted I went training. They fully support me, which is brilliant.”

Tomorrow (SUNDAY), Deeney will hope to help Wicklow back into the All-Ireland Junior Final for the first time since that win in 2011. Since that promotion, Wicklow competed at the Intermediate grade until their relegation last summer. For Deeney, memories of scoring a key penalty in their replayed victory over New York at Croke Park are still precious.

A fresh face on the panel back then, she was called into the starting team for the replay – sister Caoilfhionn missed a late free to win the first game – which gave her the chance to shine the second day out.

“I was very lucky because it was my first year with the panel. It was brilliant, playing with my older sister Caoilfhionn as well. It was a massive career highlight.

“I even remember after the final whistle blew in the first game I was just delighted that we had gotten the draw and that we’d get to do it again. I was just chuffed to get another go at it.

“For Caoilfhionn, she is a brilliant player, but that day she was disappointed in her performance. I thought we did alright but we hadn’t really shown what we could do as a team. I was delighted that we’d get another chance to showcase that and that we managed to finish the job on the second day.”

And all focus is now on Antrim as the teams get set for a last-four clash at the home of Donaghmore/Ashbourne in Meath, a game that viewers can watch live on the LGFA Facebook Page. Deeney knows they face a tough challenge, following their recent wins over Carlow and Fermanagh.

“We watched a bit of tape the other day, and that’s all we know about them at the minute. They will be dangerous, even watching the first few minutes against Derry I though they looked very strong.

“I think coming up into Division 3 has helped us massively ahead of the Championship. You are playing big teams and I think we held our own there this year.

“We’ll be up against it, definitely, but we have had a good two weeks since playing Fermanagh. We have worked hard and the competition is there for jerseys. I think everyone is really pushing hard at the minute and we’ll be going into it with one thing in mind. We just want to come out on the good end of it.”