LADIES FOOTBALL: ‘I’m trying not to think about it too much. It’s just a football match at the end of the day.’ – Westmeath’s Vicky Carr 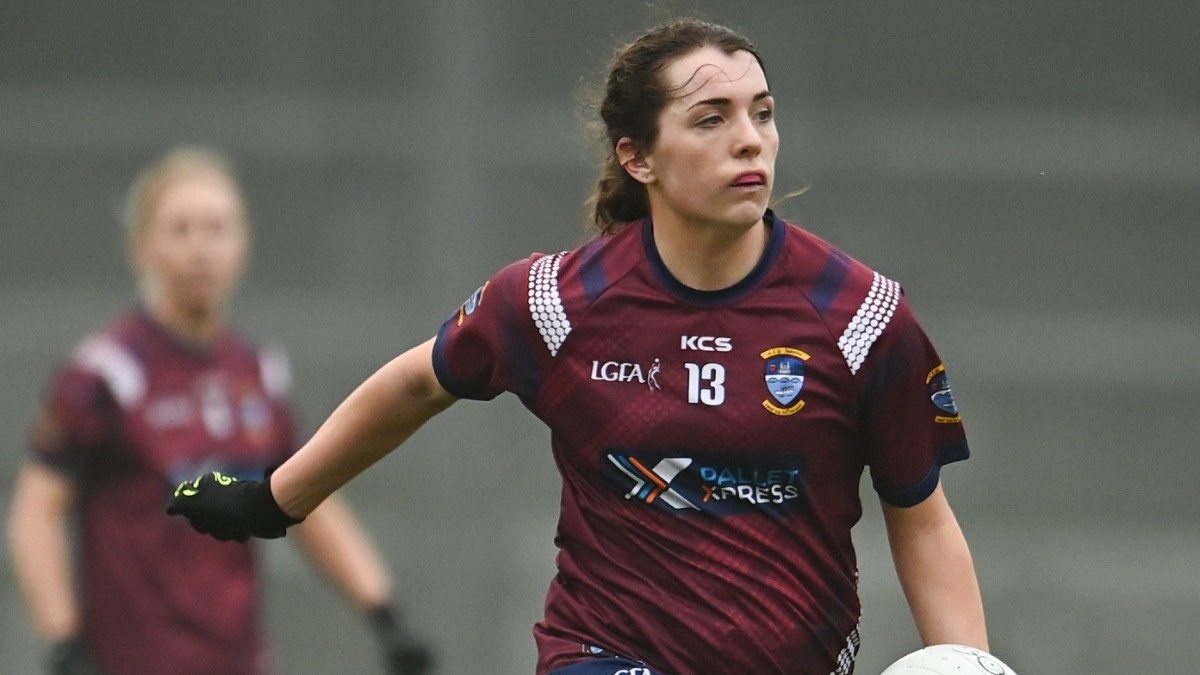 Living at home with her county team coach and a strength and conditioning expert meant Westmeath Ladies footballer Vicky Carr thrived during the summer lockdown, and she is hoping to enhance the family’s sporting reputation in tomorrow’s TG4 All-Ireland Intermediate Final.

Vicky’s father, Tommy Carr, is part of the Westmeath management team led by Sean Finnegan, and they face Meath in tomorrow’s Croke Park encounter. Tommy captained Dublin to the 1992 Leinster title, managed Dublin, Roscommon and Cavan, but has recently turned his focus to the Ladies game.

Not many players will get to experience All-Ireland Final day with a family member in 2020, so Carr is delighted to have her father at such close proximity.

“Dad is involved as a coach, so it’s brilliant to have him there with me. I suppose he can be a little bit hard on me at times, but I know he is only trying to improve me as a player,” said Vicky, who is in her third season as a Westmeath Senior.

“He stopped playing before I was born, but he was a manager when I was young. I have heard a lot of stories of the days he’s had and I’ve watched a few of his matches, so I know how involved he was.

“He has been involved with a good few teams over the last few years, but it was only when I was younger that he was really involved. But it’s great that he is with our team now.

“He has been through it all himself, he knows exactly what’s required to play sport at a high level, so it’s great that he’s able to bring the experience that he has into the whole set-up.”

It seems a variety of sporting adventures have been launched from the Carrs’ Mullingar household. Vicky’s older brother Simon plays tennis on the ATP circuit, her sister Elizabeth is one of the country’s top triathletes, while her second brother Gareth is a keen golfer and has also represented Westmeath on the senior inter-county scene.

There is no denying 19-year-old Vicky’s sporting pedigree. Growing up, she gave most sports available to her a shot at one stage or another, but it wasn’t until she started playing Ladies football that she found her natural home.

“Sport has always been such a big part of our lives. Since a young age we have always been involved in sport. We were always pushed to play something when we were younger. We all train really hard now and we are all very competitive. We are all really heavily involved in our chosen sport.

“Looking at Elizabeth, the training she does for triathlon is crazy. She’d go out cycling for three hours a day and then go for a run after it. She puts up all sorts of distances. Then she has to do the swimming as well. There is so much to balance and you have to train so hard to be successful at it. She is brilliant, she is such an athlete.”

St Loman’s player Vicky and her Westmeath teammates have been training for this game for almost a year now, following their relegation from the senior ranks in 2019 after play-off defeats to Cavan and Monaghan.

Stepping down to play Intermediate Championship for the first time was a disappointment for Carr, but after a solid Lidl Division 1 campaign, and Championship wins over Longford, Louth and Roscommon, she says the team is happy with their progress, especially with the year ending with a maiden outing at Croke Park.

“I’m trying not to think about it too much. It’s just a football match at the end of the day, but it’s brilliant, I’m really looking forward to it.

“Playing at Croke Park is massive for everyone, the stadium is huge, it’s unbelievable and I’m really looking forward to playing there. It’ll be strange to see it empty, but I am really excited about it.

“After our semi-final win over Roscommon, we were quite disappointed with how we played overall. We felt that we didn’t play to our potential. But Roscommon really put it up to us and put us under pressure and challenged us.

“Those lucky goals we got were key; they got us over the line in the end. We were delighted to win an All-Ireland Semi-final. But we knew there was a lot of work to do afterwards, and in training we have been working really hard since that game.

“Everyone has really stepped it up and we were pushing each other on, which is brilliant. It has been extremely competitive. We are just looking forward to the next few days before the final.”

Today’s final sees teams coming at the game from opposite directions, and many of the game’s experts are puzzled as to the likely outcome.

Meath were promoted from Division 3 of the Lidl National League last year and held their own in Division 2 this season. They have lost consecutive All-Ireland Intermediate Finals, but are back in the decider for a third year in a row after a stunning semi-final win over Clare.

On the other hand, Westmeath were relegated from Senior last summer after spending eight years in the top tier, while they will play Division 1 football once again in 2021. They devoured Longford with a nine-goal display earlier in the competition, but staggered through their semi-final against Roscommon.

Unquestionably Meath are a team on the up, but will Westmeath’s more recent senior experience press pause on their graduation for another year?

“We have looked at Meath and we have watched a few of their games. We know exactly what they are about. They are an extremely good side; they’re strong, physical and fast.