LADIES FOOTBALL: ‘It Just Reminded Me Of How Much I Enjoyed Football And How Much Of A Buzz You Get From Taking Part.’ – Cork’s Valerie Mulcahy 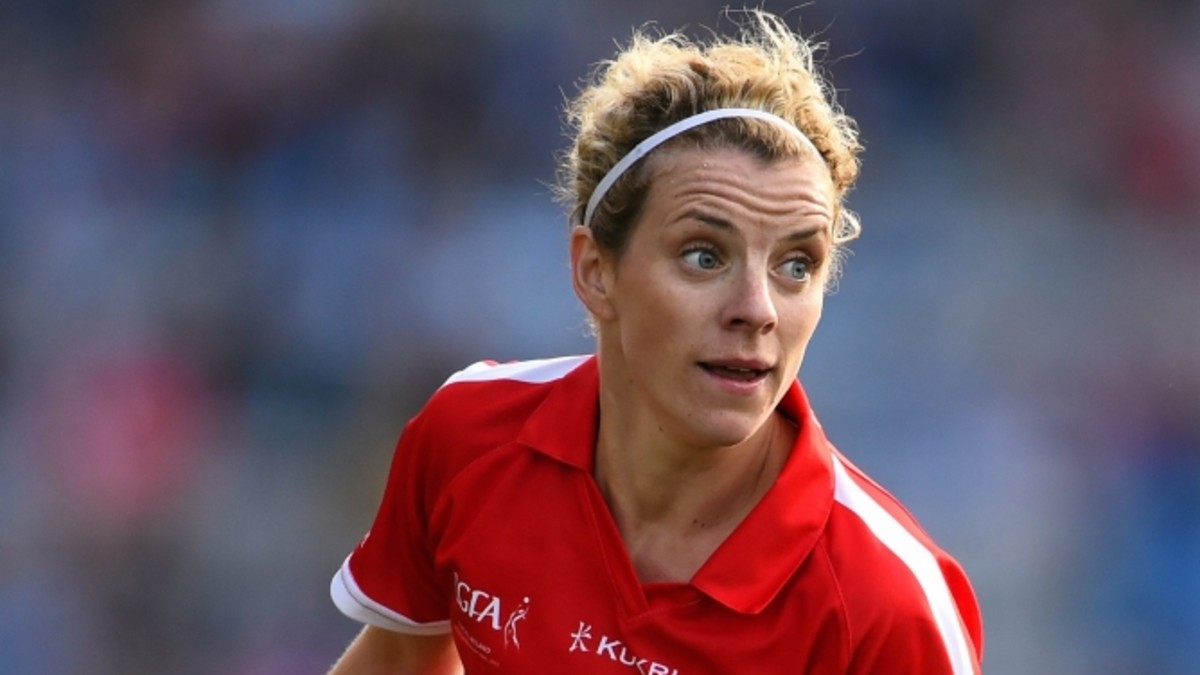 As one of the most decorated Ladies footballers of all time, the Rockbán native thought she had clocked out of the game for the final time before the 2016 championship, with her head turned towards the coaching game.

But a move to Dublin club Ballyboden St Enda’s has opened the door for her to follow both paths. The notion of managing the club came about this time last year, and after consulting with her long-time mentor Eamonn Ryan, Mulcahy decided to give it a go.

“Deborah Heavey is heavily involved in Ballyboden and she pitched the idea to me at the end of last summer and I said I’d give it a go,” said Mulcahy, who cut her coaching teeth with Gaelcoláiste Mhuire in Cork City, the Cork minor girls and TG4’s Underdogs.

“When training was starting last October, I joined in a bit. If ever there is a football around, I’m like a child: I want to be out kicking it. I joined in to training and it went grand.

“I was humming and hawing with the idea of playing too. I wanted to focus on the managerial and coaching role because that is so time consuming. I didn’t really want to be trying to do a bit of everything. I wanted to get the coaching and managerial role under control.

“In the end what inspired me to go back was when the girls were asking me if I’d play. Then after I’d decided, during lockdown I was taking a walk in the mountain and I went over on my ankle, fractured it and tore ligaments.

“It was a fairly bad fracture. I was sure the chance was gone and maybe the world was telling me something, but I’m after recovering from that injury, so I felt good.

“After all that it was so exciting to get an opportunity to get out and play. It just reminded me of how much I enjoyed football and how much of a buzz you get from taking part.

“Four years ago I never thought when I retired and played my last game with my local club Rockbán – which was founded by my mam – that I’d be actually togging out for a Dublin club, but it was great to pull on the jersey.”

As manager of the ten All-Ireland titles Mulcahy won with Cork, Ryan has been a colossal influence on Mulcahy’s career.

He once described her playing talent as being “up there with Maurice Fitzgerald, Diarmuid Connolly and Mikey Sheehy,” but away from the field the legendary Cork manager has been a guiding light for her.

Ryan’s recent ill-health means he is in the minds of his former players and Mulcahy says he was so much more than a manager for her during her playing days.

“We have had a great relationship over the years. I spoke to him about this job in Ballyboden. I had a chat with him about the possible player/manager scenario I was finding myself in. He was very encouraging for me to do it.

“He has always been just a phone call away if any of us needed assistance or a chat about something. He has been such an influence on my life. He has been like a father figure to a lot of us, or as I used to joke with him ‘a grandfather figure’.

“I have learned huge amounts from Eamonn Ryan about trying to create good standards and a place for players to excel. That has definitely helped me.

“He has been a massive influence on me in my life and now as a manager. The influence someone can have on your sporting performance as well as off the pitch support is huge.”

The early signs for Mulcahy the manager are very positive. As ten-time record winners of the Dublin Senior Championship there is great hope and expectation that Ballyboden St Enda’s can regularly challenge five-in-a-row champions Foxrock/Cabinteely.

They face the ultimate test against the champions in next Wednesday’s semi-finals and regardless of the result, Mulcahy says there is a homely feeling about the club.

“It’s really nice to be involved with the women’s squad and having such a strong female presence in the management team.

“I have a great management team with me with Orla Smith and Sarah Denvir, both of whom are former Dublin and Ballyboden players.

“Former Mayo player Denise McDonagh is with us too and we have the two lads, Ned Flood and Eamonn O’Reilly, who have been with the team for the last number of years.

“It’s great to have such a strong female visibility on the sideline, and club people who have played there for years and have a good sense of it. They’re trying to get back to where Ballyboden were, to be a solid outfit, which we have helped recreate again.”

As well as her inter-county glory, Mulcahy experienced club All-Ireland success with Rockbán at Junior and Intermediate grades in 2001 and 2002. A first county title as a player manager would bring just as much joy, you’d suspect.

And while playing for the club her mother founded to give Mulcahy a chance to shine, winning in Dublin would feel natural too.

“I am hugely loyal to my club in Rockbán and I’m very grateful to have gotten the opportunity to play with them so I could go on and play with Cork.

“While I didn’t ever see myself playing with any other club, I surprised myself on how much I enjoy being involved with Ballyboden.

“It’s nice because there are links with my own club. Susan White was a teammate of mine and we won a junior and intermediate All-Irelands together in Rockbán. Then when she went to Dublin and joined Ballyboden she won a senior club All-Ireland.

“She is the only player to have won all three. Now I’m not saying that I have ambitions to match her, but there is that tie between the club there. It feels good to wear the jersey.”