LADIES FOOTBALL: ‘It’s A Tough Draw But If You Want To Beat Dublin The First Game Is Probably The Best Time To Beat Them’ – Donegal Captain Geraldine McLaughlin 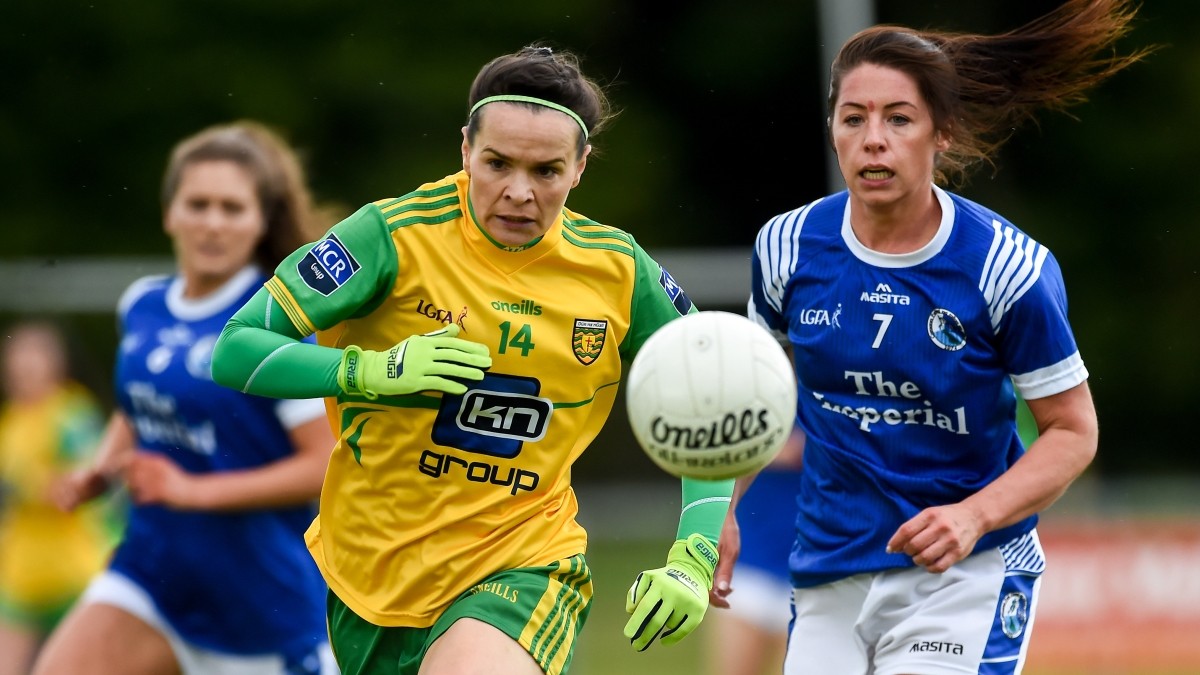 Not many names strike more fear in defenders than Donegal’s Geraldine McLaughlin.

The 27-year-old is facing into her 11th season of inter-county championship football this autumn and if recent weeks are anything to go by, she is showing no signs of slowing her scoring rate.

Playing for 2014 All-Ireland club champions Termon, McLaughlin has already hit the net nine times in three Donegal senior championship games this season, and tomorrow (SUN) a repeat of last year’s final will pit the champions against 2017 and ’18 winners Glenfin.

If the next month pans out as hoped, Termon and McLaughlin will be champions for the ninth time in 11 seasons and she will carry her form into Maxi Curran’s county panel for a challenging inter-county championship.

Triple TG4 All-Ireland Senior champions Dublin and in-form Munster outfit Waterford will be the opponents, and with only one team emerging for the semi-finals, both games are must-wins.

“It’s a tough draw but if you want to beat Dublin the first game is probably the best time to beat them. We’ll see how it goes,” said county captain McLaughlin, who scored 7-33 in last year’s TG4 All-Ireland championship.

“Yes, we have Dublin in the first round, and it is hard to know where it’s going to go. But to be honest it’s nice to just concentrate on the club and then we’ll go back to county when that’s all done.

“Most years you’d be trying to do the two so it’s quite nice to have one and then we get to go to the other panel then.

“We have three wins from three so far which is great. We are guaranteed a semi-final at this stage, but we have our last game now this Sunday against Glenfin, which will be a tough game for us.

Whoever wins this game will be top of the table. In the semi-final first place plays fourth and second plays third, so there is still plenty to play for.”

Reflecting on 2019, McLaughlin admits that Donegal failed to hit the targets they had set out for themselves.

Only their victory in the Ulster final protected them from a relegation play-off following defeats to Mayo and Tyrone and considering they had started the year with five wins from seven Lidl NFL Division 1 games there was a natural sense of deflation.

The loss of Yvonne Bonner, Karen Guthrie and Katy Herron to the AFL was certainly a blow in 2019, and while Heron has signed up again and Guthrie will be available for Donegal.

“Yvonne, Karen and Katie are all back from Australia at the minute. I’m not sure what their situation is, but originally, they were going to be back for the championship. I know Karen is not going back to the AFL, and it will be nice when we go back training together.”

After first pulling on the green and gold shirt McLaughlin quickly caught the eye with match winning tallies from the edge of the square. As a 17-year-old debutant she scored five points as Donegal defeated Waterford to claim the 2010 TG4 Intermediate All-Ireland.

Five years later she tagged on 2-7 as the county won its first Ulster senior title. A year earlier a 3-8 personal score helped Termon become All-Ireland Senior club champions, so the 5-6 she accumulated against Moville in this year’s championship is no shock.

What is of surprise to most Ladies football followers is that McLaughlin has yet to win an All Star, despite five nominations in her career. While it’s an award every player covets, team honours are what drives her.

“To be honest it doesn’t really bother me at all. I’d rather win an All-Ireland. Even when we won the club All-Ireland, I’d take that any day over an All Star.

“It doesn’t bother me at all. it’s like this: I am just enjoying what I am doing playing football. It doesn’t really bother me one bit.”

While a few of Termon’s senior players were there when they reclaimed their county title last season, the underage work taking place in the club is coming to the fore and 22 of the squad won their first Donegal senior medals in 2019.

In a recent championship game against Buncrana, McLaughlin took a back seat in the scoring stakes as 17-year-old Ciara McGarvey cracked five goals. The experienced member of the partnership is impressed with all the talent coming through.

“There are a lot of young ones in the panel now. For a couple of years, we were going through a transition and the younger ones have all come through now. It is good seeing that turnaround since 2014.

“The amount of players that were playing on that team who don’t play anymore is frightening. But it’s good to see we are still winning and there is a lot of turnover, but I think it’s good for a club to be able to do that.

“Wee Ciara McGarvey, she’s a class footballer. She only came in this year. We play well together even though it’s only our first year. We work well off each other. It definitely helps when you have someone else in there with you.”