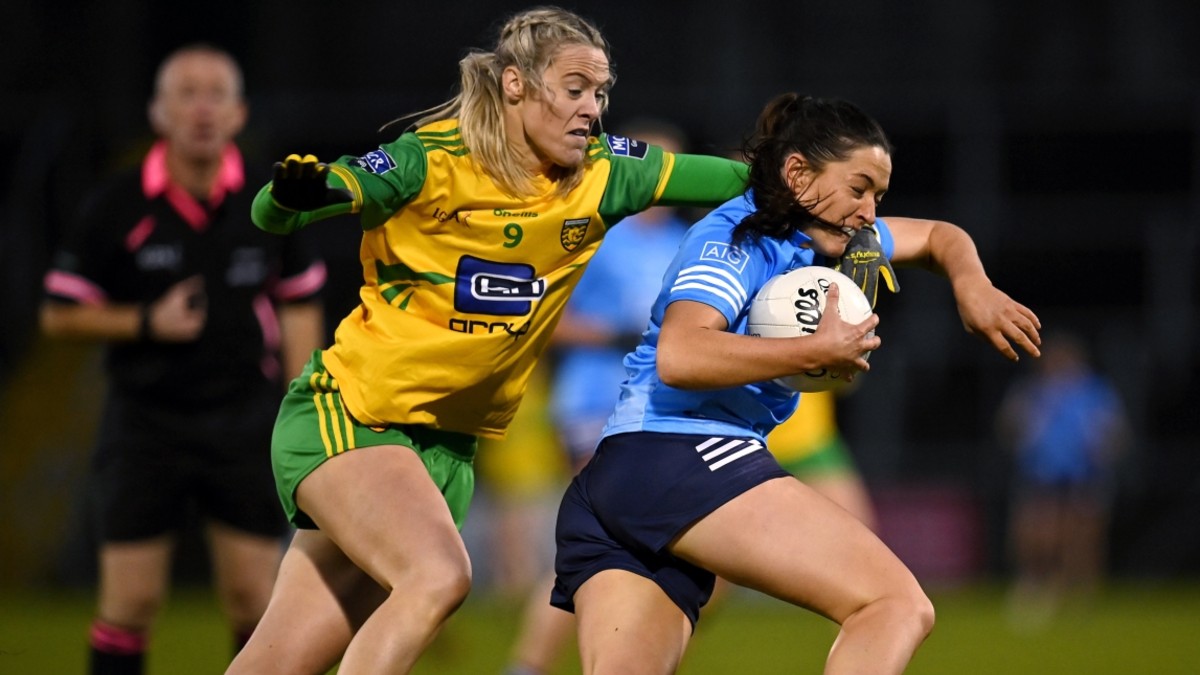 Sinead Goldrick of Dublin in action against Yvonne Bonner of Donegal during the TG4 All-Ireland Senior Ladies Football Championship Round 1 match between Dublin and Donegal at Kingspan Breffni Park in Cavan. Photo by Seb Daly/Sportsfile

Dublin got the shock of their lives, but Sinead Aherne’s freakish goal gave them victory over Donegal in this cracking TG4 All-Ireland Senior Football Championship tie at Kingspan Breffni.

Geraldine McLaughlin’s goal early in the second-half had kick started a comeback from the Ulster side, but when Aherne’s shot somehow spun into the net 14 minutes from time they were unable to reel in the champions.

A powerful performance from Jennifer Dunne in midfield was crucial for Dublin as Noelle Healy’s first-half goal gave them the upper hand, but it wasn’t easy in the face of a spirited performance from Donegal after the restart.

Facing the All-Ireland champions Maxi Curran’s side needed to get off to a positive start, and a second-minute point from Yvonne Bonner from distance was just they start they craved.

It was a slightly nervy start from Dublin – they were fortunate not to concede a goal following a scramble at the back – and they welcomed a simple free from Aherne to get them off the mark. But with Dunne dominating at midfield Mick Bohan’s side started to gain control.

Dublin took the lead in the 11th minute when Dunne laid on the final pass and Healy found the net with a low finish, while Dunne and Aherne added on points to put the champions 1-3 to 0-2 ahead.

The Donegal defence looked porous at that stage and they were relieved when Ciara Hegarty managed to deny Healy a second goal when she got back on the line and cleared, and moments later at the other end the Ulster side picked up a key score.

Nicole Gordon was a late inclusion in the side and she made a big impact early on, and it was her drop kick that somehow found its way through a crowd of Dublin defenders to cut the deficit to two points 12 minutes from the interval.

But that was Donegal’s last score of the half as Dublin stretched their advantage. Lauren Magee replied immediately with a good score, and although Aherne kicked a couple of wides, Sarah McCaffrey, Aherne and Sinead Goldrick added good scores as Dublin led 1-7 to 1-2 at half time.

Donegal were quickest to find match pace again in the second-half and seconds after the restart Karen Guthrie sent Geraldine McLaughlin in for a goal, which cut Dublin’s lead to two points.

Once again it was Dunne who led the Dublin reply with a great score, but McLaughlin and Guthrie soon added points to put the minimum between the teams.

While under severe pressure, Dublin always manage to maintain their lead, and 14 minutes from time they stretched that advantage in the strangest of circumstances. Aherne took aim and her shot for a point crashed back of the top of the post, but somehow the ball spun back into the net, which opened out a four-point lead.

A lesser team would have collapsed following that setback, but Donegal kicked three points in as many minutes to give themselves a chance, but Healy’s final point made sure of the win for Dublin, who can make sure of their semi-final spot with victory against Waterford next weekend.