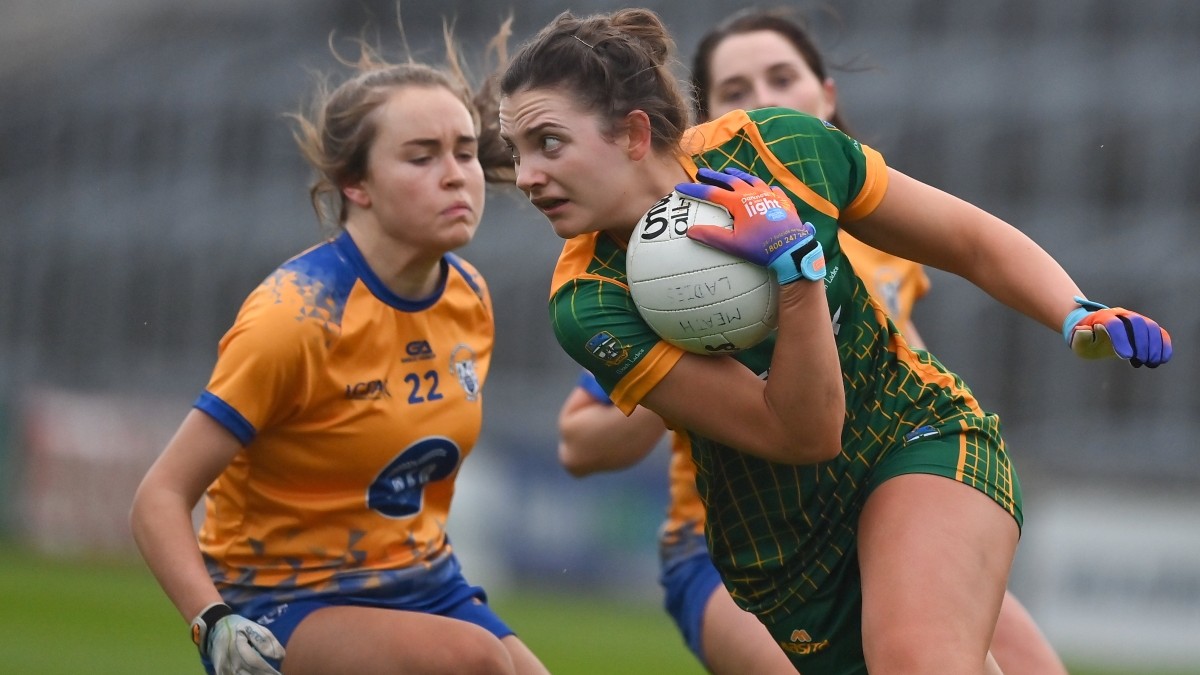 Early goals from Niamh O’Sullivan and Stacey Grimes helped Meath qualify for a third straight TG4 All-Ireland Intermediate Final after they powered past Clare with an emphatic performance at O’Moore Park.

The two goals inside the opening ten minutes gave Meath the lead they required, and after Bridgetta Lynch added their third straight after the restart and Grimes converted her second penalty after 39 minutes, Meath’s air-tight defence made sure there was no way back for Clare.

The win means Meath will play either Westmeath or Roscommon in the final at Croke Park on Sunday 20 December.

The game got off to a defensive start with the teams trading scores early on. Emma Troy pointed first for Meath before Niamh O’Dea converted her side’s only score from play of the half. Meath’s movement up front was decisive with Emma Duggan, Vikki Wall and dual star Megan Thynne vital in attack.

The Royals’ purple patch came on eight minutes. O’Sullivan registered Meath’s first green flag, when she slipped the ball past Clare goalkeeper Micaela Glynn after a beautiful pass from Grimes. Grimes, herself, hit her opening score on the resumption before she converted a penalty a minute later after Duggan was fouled in the large parallelogram.

Two Gráinne Nolan frees sandwiched a Grimes point from play and as the first-half water break whistle blew it was the Royals that led by 2-3 to 0-3. Meath looked comfortable on the ball, dominating defence and overturning multiple Clare attacks, with Thynne and Máire O’Shaughnessy in particular fine form.

Grimes added a further brace on the resumption, the first of which was a team move with Vikki Wall finding O’Sullivan and then Grimes finished off the right.

Clare looked ominous on the attack with Roisín Considine, Chloe Moloney and Nolan all in the hunt for scores but the Meath defence were resolute.

The teams traded frees once more before the break: Vikki Wall converted her own free while Nolan added her third free of the half.

Meath got off to an electric second half registering 2-7 without reply. Meath’s third goal in the first minute of the second-half put the result beyond doubt. A terrific run by Vikki Wall found Lynch and the Oldcastle forward finished to the net with only the keeper to beat.

Further points from Thynne, Aoibhín Cleary and a Duggan free kept the scoreboard ticking over for the Royals.

To their credit, Clare continued to run at the Meath defence and 2019 All Star goalkeeper Monica McGuirk was called into action for the Royals with a string of fine saves that ensured another clean sheet.

Stacey Grimes converted her second penalty on 39 minutes to put the result of the game beyond doubt.

As time ticked away, Clare sent several efforts wide while Grimes, O’Shaughnessy and substitute Emma White all got on the score sheet to ensure Meath’s plans for December involve another trip to the capital and Croke Park on 20 December.