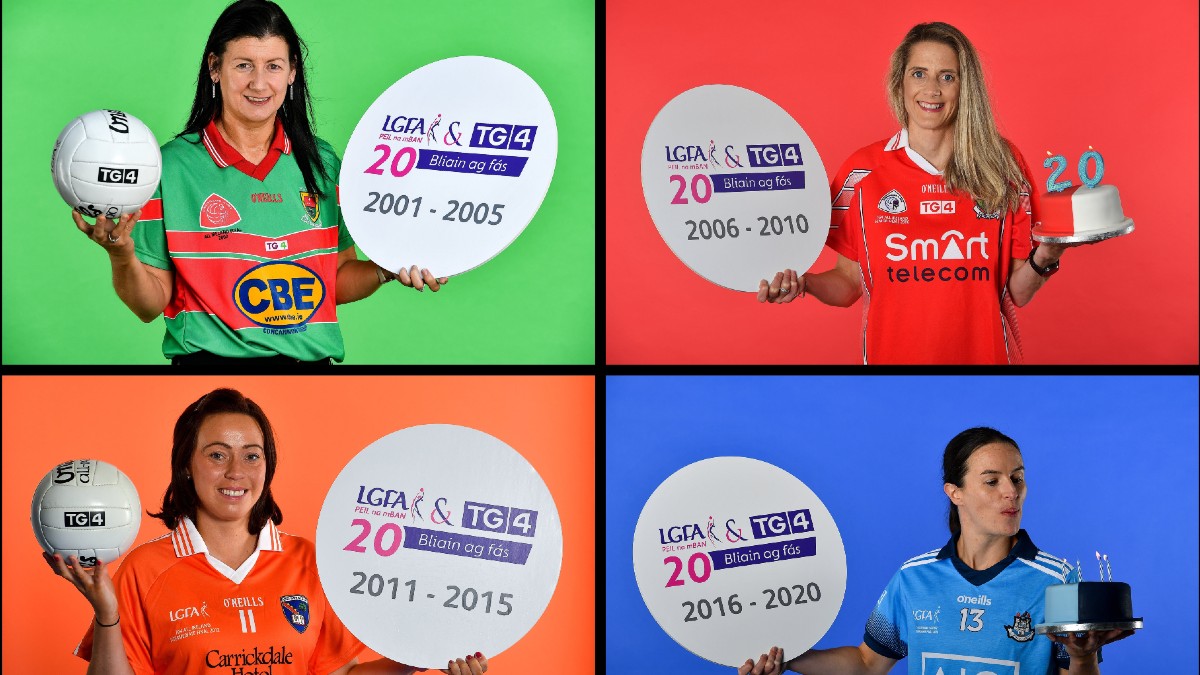 IT’S a massive weekend in the TG4 All-Ireland Ladies Football Championships – with the Intermediate and Senior competitions getting underway.

There are three live TG4 matches in the pipeline – starting on Friday night with the clash under lights between Ulster rivals Tyrone and Armagh at Kingspan Breffni in Cavan (7.30pm).

That’s followed by two live games on Saturday – Tipperary v Galway at the LIT Gaelic Grounds in Limerick (3.0) and an opening fixture in the 2020 campaign for Champions Dublin, who lock horns with Donegal at Kingspan Breffni (5.0).

On Sunday, the LGFA Facebook Page will have live coverage of Cavan v Kerry in the Senior Championship from St Brendan’s Park in Birr (1.0), while all other fixtures in the Junior and Intermediate Championships over the weekend will be streamed live.

Armagh have the psychological advantage heading into this one, having scored a big victory over the Red Hands in the recent Ulster semi-final.

Aimee Mackin is back from injury and in free-scoring form for Armagh – and she’s a big threat to Tyrone.

Gerry Moane’s Tyrone will look to tighten up in defence and they showed in last year’s Senior Championship that they’re a very capable outfit – having progressed to the quarter-finals, while scalping Donegal along the way.

Caroline O’Hanlon has been a massive leader for Armagh for many years and while renowned as a midfielder, she’s named in the full-forward line here.

Captain Neamh Woods will lead the Tyrone charge as they look to gain revenge for that provincial loss.

Galway lost out to Dublin in the senior decider, while Tipperary beat Meath to claim the Intermediate title.

The counties have met already this year – with Galway scoring a 1-12 to 0-4 victory over the Premier County in the Lidl National League.

Tracey Leonard is the go-to player in the Galway attack, but Lynsey Noone and Andrea Trill are young stars to watch out for also.

Tipperary will look to Aishling Moloney, the 2019 TG4 Intermediate Players’ Player of the Year, for attacking inspiration.

Galway will start as favourites – but Tipp are dangerous opponents in this live TV fixture.

Champions Dublin begin their quest for four-in-a-row in the Senior Championship with a crucial fixture against Donegal.

The Ulster side beat Dublin last year at Croke Park on the opening day of the Lidl National League campaign – but failed to progress from their All-Ireland qualifier group, losing out to Mayo and Tyrone.

Dublin are calling on 12 of last year’s All-Ireland Final team but it could be a tricky assignment for them.

On any given day, Maxi Curran’s Donegal side are capable of a big performance – but it will take something special to unsettle Mick Bohan’s Dublin.

The Dublin team is brimming with talent – and with huge strength in depth to call upon if needed.

But Donegal have Yvonne Bonner back in their side and Geraldine McLaughlin is one of the best forwards in the country.

This game will be streamed live on the LGFA’s Facebook Page – and an intriguing encounter lies in store.

Cork will start as favourites to top this group, but Cavan and Kerry are capable of delivering big displays.

Kerry meet Cork in Round 2 – and victory for the Kingdom here would set them up nicely for a crack at their big Munster rivals.

Kerry were flying in Division 2 of the Lidl National League before the competition was curtailed – and there’s real class in their forward division.

Cavan have the three Sheridan sisters – Mona, Aishling and Geraldine – in their starting 15, and they’ll need all of their experience and know-how to ensure that the Breffni girls are in with a shout here.

Cavan will have to work hard to shut down a lethal Kerry inside line – with former underage star Síofra O’Shea eager to grab her chance to impress.

Leinster rivals Wexford and Offaly meet in Clane to get Group 1 of the Intermediate Championship underway.

It’s a competitive pool that also contains Roscommon – who contested a semi-final against Meath last year.

Offaly have players from 2019 All-Ireland Intermediate club champions Naomh Ciaran to call upon – and there have been recent signs of a Faithful County revival.

An interesting Group 2 contains three Leinster counties – and Westmeath will fancy their chances of advancing to the semi-finals.

The Lake County were a Senior outfit last year – and are anxious to bounce back at the first attempt.

Longford will provide stout resistance in this Mullahoran opener – while 2019 Junior champions Louth have the chance to study both opponents before they enter the fray next weekend.

Lucy McCartan has worn the Republic of Ireland soccer shirt and is a huge attacking threat for Westmeath – while Longford skipper Michelle Farrell is another talented soccer player with bags of experience.

Can Meath make it third time lucky? The Royals have suffered defeat in the 2018 and 2019 All-Ireland Intermediate finals – and are aiming for a December 20 slot at Croke Park.

Down are a team to watch, however, and Natasha Ferris is a player capable of racking up a massive score.

She’ll have to get past Meath’s TG4 All Star goalkeeper Monica McGuirk, however, while the Leinster outfit have players capable of hurting the opposition.

Vikki Wall scored a goal of the season contender in the All-Ireland semi-final victory over Roscommon last year – while Stacey Grimes is another noted score-getter.

Kildare were going great guns in Division 3 of the Lidl National League before Covid-19 brought the competition to a halt.

The Lilywhites had scored five victories from five outings and were emerging as a team of real substance.

It remains to be seen how the break has affected Kildare, and indeed all teams in the competition, but Daniel Moynihan’s outfit are a team to watch.

Opponents Clare were languishing towards the bottom of Division 2, with a point from five games, and that crude line of form suggests that this one will be close.

Former Waterford ace Gráinne Kenneally is in the Kildare team, while the brilliant Niamh O’Dea will spearhead the Clare attack.

Sligo had lost all five games in Division 3 before the Lidl National League was suspended.

Laois, in contrast, had scored victories over Fermanagh and Longford, while also earning a draw against Wicklow in a high-scoring game.

Laois are a county with a rich heritage in the senior grade but the aim for a while now has been to regain that senior status.

Lauren Boles is a player to watch in the Sligo inside line, while captain Anna Healy was the Laois player of the year in 2019.

Wicklow have one foot in the semi-finals already following a big victory over Carlow last weekend.

They’re regarded by many as favourites for the Junior title, having dropped down from the Intermediate ranks last year.

Meadbh Deeney was on fire last Sunday – bagging 2-6 for Wicklow against the Barrowsiders, and she’ll feature prominently again here.

But Fermanagh were Junior Finalists in 2019 – and they have a potent inside line that contains former captain Joanne Doonan and Eimear Smyth, the 2019 TG4 Junior Players’ Player of the Year.

They were without Saoirse Tennyson for much of the game though, with the Naomh Pól player now thankfully recovered from cruciate knee ligament damaged sustained in the Clones fixture.

That’s a big boost for the Saffrons, who are now captained by Áine Tubridy, who has taken over that role from club mate Tennyson.

Limerick got off to a winning start last weekend – and victory here would send them through to the semi-finals.

The Shannonsiders were far too good for Derry, on a day when 2018 All-Ireland winning captain Cathy Mee scored 2-3.