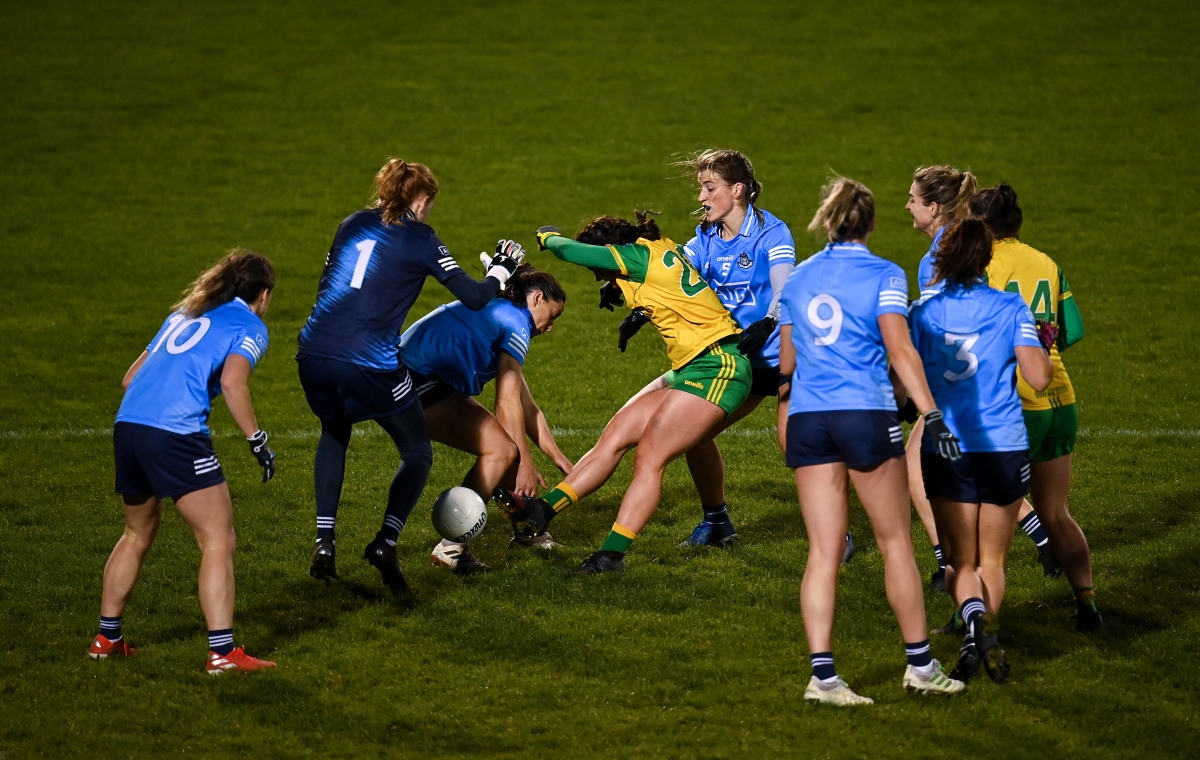 Nicole Gordon of Donegal drop kicks past Ciara Trant to score her side’s first goal during the TG4 All-Ireland Senior Ladies Football Championship Round 1 match between Dublin and Donegal at Kingspan Breffni Park in Cavan. Photo by Seb Daly/Sportsfile

TG4 All-Ireland Senior Champions Dublin began their quest for a fourth successive title with a victory over Donegal on Saturday evening, but they needed a late Sinead Aherne goal to be sure of the win.

The Sky Blues claimed a 2-13 to 2-10 victory at Kingspan Breffni but Donegal pushed them all the way after Geraldine McLaughlin’s goal early in the second-half inspired a revival from Maxi Curran’s side.

Noelle Healy’s 11th minute goal had settled Dublin after a slow start, and with Jennifer Dunne inspirational at midfield they held a 1-7 to 1-2 half-time lead – despite Nicole Gordon’s goal 12 minutes from the interval.

Five down at the break, Donegal closed to within one point on a couple of occasions, but when Aherne’s shot spun into the net via the post Dublin had the lead they needed to hold on.

Dublin face Waterford in the second Group 3 game next Saturday, where a win for the champions will see them into the All-Ireland semi-final. Donegal can only hope for an upset there.

This afternoon (SUNDAY) Kerry showed some brilliant form to claim a 5-14 to 0-13 win over Cavan in Group 1, a victory that set them up for a likely group decider against rivals Cork next weekend.

Louise Ní Mhuircheartaigh and Síofra O’Shea scored two goals each for the Kingdom, who were dominant throughout and showed that their early season form in the Lidl NFL Division 2 has been maintained.

Kerry were 2-7 to 0-6 clear at half-time in Birr and continued to dominate as Ní Mhuircheartaigh and Andrea Murphy hit early goals after the break to end Cavan’s hopes.

Elsewhere in the Senior Championship, last year’s finalists Galway just about claimed an opening day victory as 2019 Intermediate winners Tipperary lost out by 1-15 to 1-14 at the Gaelic Grounds.

Aishling Moloney punched a late goal to give Tipperary hope in the final minutes, but in the end her 1-10 tally was not enough to pick up the win.

Mackin helped herself to 1-6 in a brilliant performance, while Kelly Mallon and Caroline O’Hanlon also found the net for the victors.

Tyrone had Niamh O’Neill and Chloe McCaffrey on song, but they must beat Mayo next Saturday to have any hopes of reaching the last four.

In the Intermediate Championship, Westmeath caught the eye with a goal fest against Longford. Karen Hegarty scored three goals and substitute Sarah McCormack bagged two in their 9-9 to 2-6 win. Longford need to beat Louth next week to renew their hopes of making the knock-out stages.

In Group 1 Wexford got off to a great start with a 3-10 to 1-8 win over Offaly, with first-half goals from Aisling Murphy, Bernie Breen and Caitriona Murray key to the win. If they can defeat Roscommon next Sunday they will be sure of a semi-final spot.

Group 4 promises to be a hard-fought pool with four teams competing, and Kildare gave themselves real hopes of making the semi-final with a 2-11 to -12 win over Clare. Second-half goals from Ellen Dowling and Nessa Dooley gave them the honours there.

Meanwhile, Laois showed they are a team in form after they stunned Sligo with a 5-8 to 1-4 win in Kiltoom. Sarah-Anne Fitzgerald, Laura Nerney and Emma Lawlor hit the net in the first-half to give them the edge.

And in Group 3, Meath faced a real battle against Down, but they held on for a 0-11 to 1-6 win. Jessica Foy’s late goal gave Down hope, but Eamonn Murray’s side fought hard to claim the honours.

In the Junior Championship, Wicklow have already made certain of a place in the semi-final following their second win of the competition, a 0-9 to 1-2 victory against Fermanagh. Fermanagh will now battle it out with Carlow for the other semi-final spot on offer from Group A.

And Limerick, the 2018champions, also booked their spot in the last four, as the Shannonsiders claimed victory over last year’s semi-finalists Antrim thanks to goals from Amy Ryan and Cathy Mee.