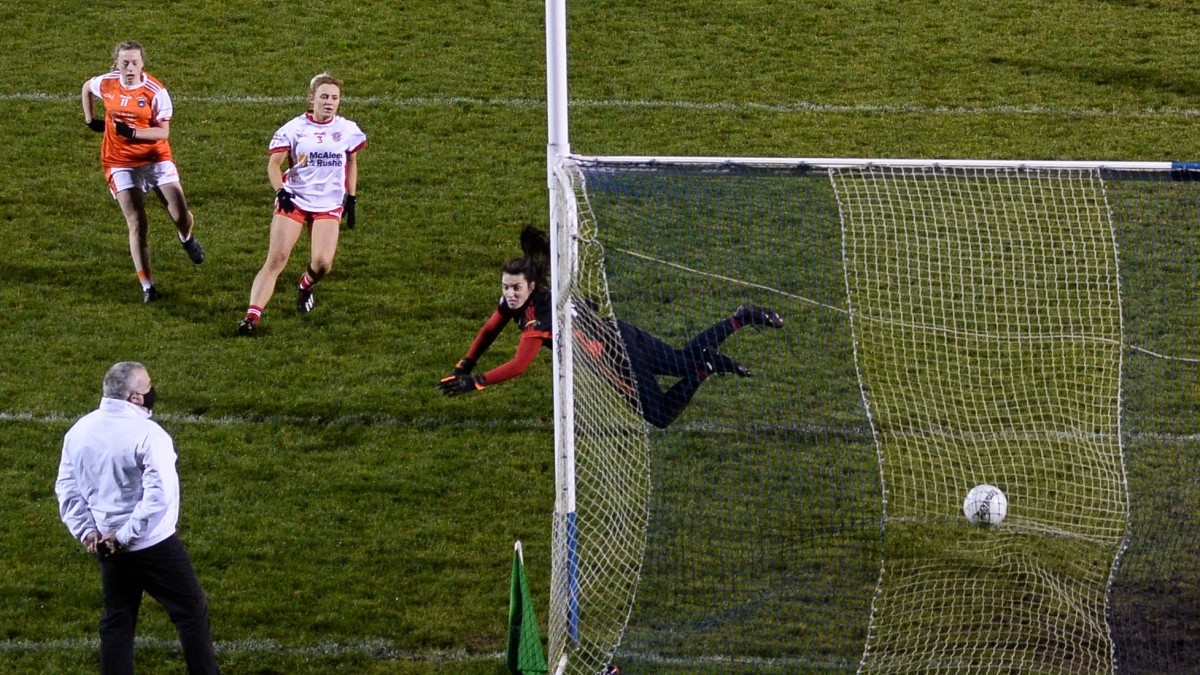 Aoife McCoy hit a hat-trick of goals as Armagh powered past Ulster rivals Tyrone to claim victory in the first TG4 All-Ireland Senior Championship game of the season.

This Group 4 clash at Kingspan Breffni was decided before half time as Armagh hit five goals, including two from McCoy and one each from Aimee Mackin, Caroline O’Hanlon and Kelly Mallon, while McCoy’s third 13 minutes from time ended any slim hopes of a Tyrone comeback.

This game was played at a frantic pace throughout, and with both teams playing free-flowing, attacking football the scores were frequent.

Tyrone enjoyed the better start of the two teams with points from Niamh O’Neill and Chloe McCaffrey inside the first two minutes.

A bright move from their half-back line saw Eve Lavery get Armagh up and running, while Aimee Mackin – back after a year out of the game through injury – kicked her first to level matters after six minutes.

Operating from the left flank, McCaffrey was a real threat to Armagh, and her second point restored Tyrone’s advantage, before she struck her side’s first goal after 10 minutes, which found the net with the aid of a deflection.

While the defensive play was impressive in the early stages, that standard soon slipped, and two minutes of madness from Tyrone allowed Armagh to take control. McCoy goaled before Kelly Mallon pointed a free, while Aimee Mackin hit the net again for Armagh after they won possession from a Tyrone restart.

Tyrone were 2-3 to 1-4 behind at that stage, but they struck three unanswered points with O’Neill twice on target. Again Armagh had an answer though, when McCoy finished her second goal, but less than a minute later Tyrone were back in touch again when O’Neill gave her side a 2-7 to 3-3 lead after she claimed Grainne Rafferty’s long delivery.

That lead only lasted 60 seconds before Armagh’s fourth goal arrived, this time O’Hanlon provided the brilliant finish, while Mallon also got in on the act three minutes from the interval following a driving run from Catherine Marley, which put Armagh 5-7 to 2-9 clear at half time.

Following an Aimee Mackin free to start the second half, O’Neill brought her personal tally to 1-4 with a good score for Tyrone, and despite good points from McCaffrey and Rafferty, Tyrone could never really get within touching distance of Armagh.

That was largely due to Aimee Mackin’s increasing influence and she helped her side into a 5-11 to 2-12 lead by the 41st minute, although a brilliant block from full back Clodagh McCambridge denied Rafferty a certain Tyrone goal.

McCoy completed her hat-trick with a good strike in the 47th minute, and although O’Neill punched her side’s third goal three minutes later there was no way back for Tyrone, who face Mayo next weekend.