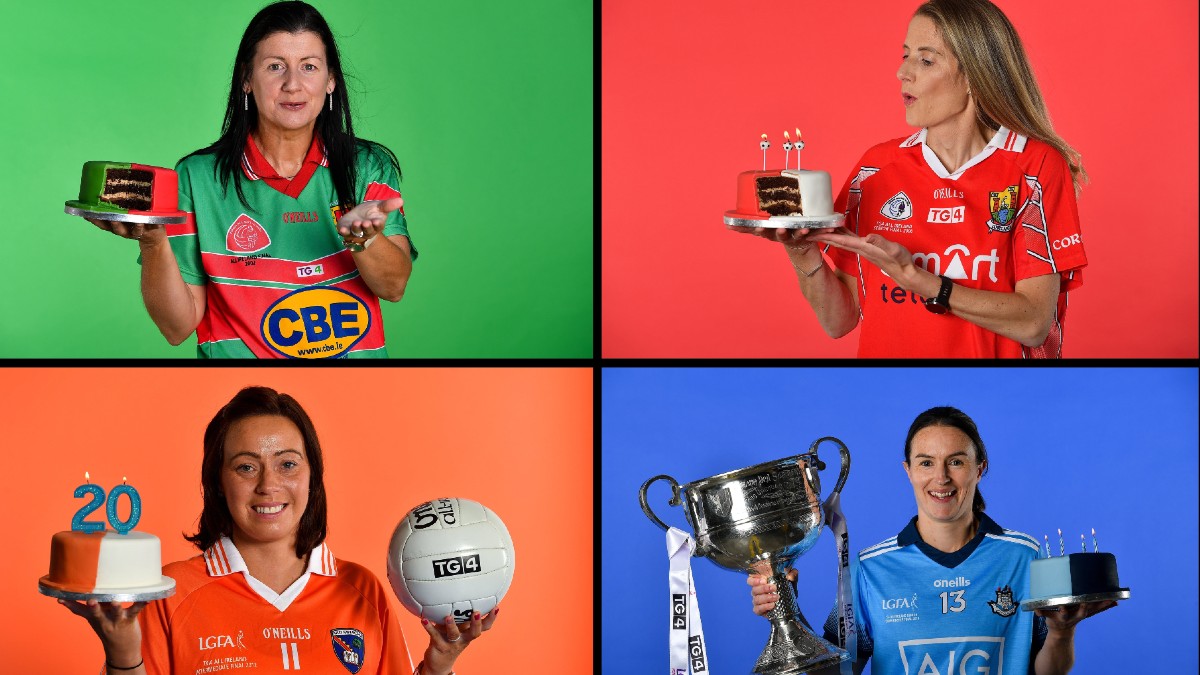 The Ladies Gaelic Football Association and Championship sponsors TG4 are delighted to announce that all 42 games in the 2020 TG4 All-Ireland Championships will be available to watch LIVE – and FREE of charge.

TG4 will screen nine games in total – including the West County Hotel Cup (Junior), Mary Quinn Memorial Cup (Intermediate) and Brendan Martin Cup (Senior) Finals – while the other 33 games will be streamed on various platforms.

31 counties will compete for the silverware on offer during the 2020 TG All-Ireland adult Ladies Football Championships – and the action gets underway on Sunday when Wicklow host Carlow and Limerick meet Derry as the race for Junior Championship glory begins.

12 teams will compete for the Brendan Martin (Senior) Cup, 13 teams are in the running for the Mary Quinn Memorial Cup (Intermediate), and six teams will battle it out for the West County Hotel (Junior) Cup.

The West County Hotel Cup Final is down for decision on Saturday, December 5, with the Mary Quinn Memorial Cup and Brendan Martin Cup Finals forming part of a Croke Park double-header on Sunday, December 20.

TG4’s LIVE coverage of the 2020 Championships gets underway with a Friday night fixture under lights at Kingspan Breffni on October 30, when Ulster rivals Tyrone and Armagh go head to head in Group 4 of the Senior competition.

TG4 and the LGFA have issued a call to Tyrone and Armagh fans to show us how they are supporting the #ProperFan campaign – and to be in with a chance to feature on the TG4 Fanwall during live coverage of this eagerly-anticipated clash.

Supporters from both counties are asked to post pictures/videos of themselves in county colours on social media, using the #ProperFan hashtag, before the lucky winners will be selected to feature on the TG4 Fanwall.

TG4’s coverage attracts a significant TV audience in Ireland and globally on the TG4 Player www.tg4.tv.

Speaking to mark the launch of the 2020 TG4 Championships, TG4 Ardstiúrthóir TG4 Alan Esslemont said: “The partnership between TG4 and the LGFA, because of its long duration and because of the success it has brought to both partners over that time, has been a superb example of how Public Service Media can contribute to the development of sport and the strengthening of our society.

“I am deeply grateful to all our colleagues and friends in the LGFA for the spirit of collaboration which has been built between our two companies. TG4 is delighted to mark our 20th anniversary by continuing to extend our LGFA coverage and give this marvellous sport and these outstanding athletes the platform and recognition they deserve.”

Ladies Gaelic Football Association President Marie Hickey commented: “We are very pleased to launch our 2020 TG4 All-Ireland Championships. The partnership between the LGFA and our great friends at TG4 continues to blossom and evolve.

“Given the times that we are living in, planning for our TG4 Championships has been much different than in previous years but we are looking forward immensely to what lies in store.

“It is remarkable to think that 2020 marks the 20th anniversary of our long-standing and wonderful relationship with TG4. Their input over the years has helped to elevate the standard of our games and brought them to national and worldwide audiences.

“I’m also delighted that we can afford our members at home and abroad the chance to watch all 42 games in the 2020 TG4 All-Ireland Championships. I would also urge each and every one of our members to be a #ProperFan, and to stay at home and watch the games on TG4 and our various online platforms.

“These promise to be Championships like no other – and they also have the potential to be our most memorable yet.”

Máire will be joined on live coverage by a glittering team of analysts. Cork legend Rena Buckley, who’s an 11-time TG4 All-Ireland Senior medallist, is on board alongside Dublin’s Sorcha Furlong, a leading figure in the breakthrough 2010 win for the Sky Blues, and Waterford’s Michelle Ryan, who enjoyed a glittering Déise career that spanned almost two decades before she announced her inter-county retirement early this year.

To mark today’s launch, former All-Ireland winning captains from the various eras of TG4’s partnership with the LGFA feature in a special photo-shoot.

Mags McAlinden was captain of the Armagh team that made the breakthrough from the Mary Quinn Memorial Cup (Intermediate) ranks in 2012, while current Dublin captain Sinead Aherne has had the honour of lifting the Brendan Martin Cup in 2017, 2018 and 2019.

In the 2020 TG4 Senior Championship, Dublin are the team to catch as the Sky Blues aim for a fourth successive Brendan Martin Cup win.

Dublin’s opening fixture against Donegal in the 2020 campaign will be LIVE on TG4 on Saturday, October 31, with a 5pm start at Kingspan Breffni.

Dublin are sure to face stiff competition from last year’s beaten finalists Galway as they look to make it four-in-a-row at Senior level, while the 2019 semi-finalists Cork and Mayo are also expected to feature prominently.

Meath, meanwhile, will be aiming to go one step further this year in the Mary Quinn Memorial Cup race after losing out in the previous two Finals.

In what looks like a wide-open competition, Westmeath will be looking to bounce back to the Senior grade at the first time of asking following relegation last year, while there are a number of other counties who will fancy their chances of lifting the coveted silverware.