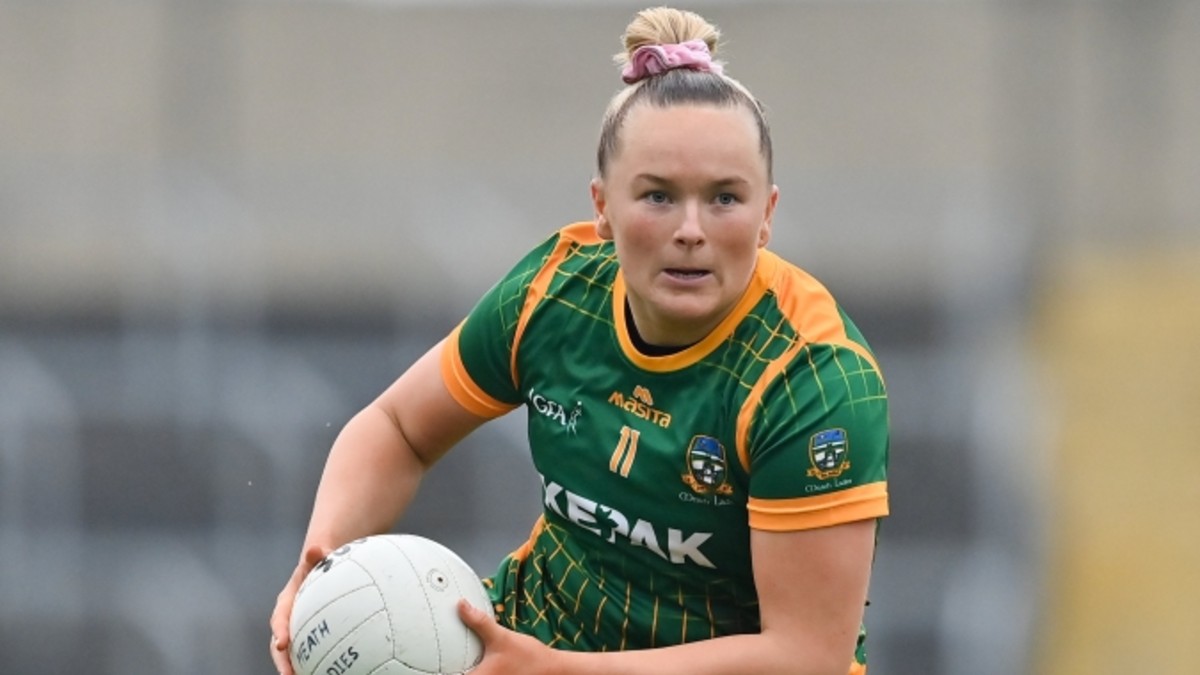 (Vikki Wall has been in excellent form again for Meath during the 2020 TG4 All-Ireland Intermediate Ladies Football Championship. Pictured here during their Semi-final against Clare at MW Hire O’Moore Park in Portlaoise.  Photo: Brendan Moran/Sportsfile.)

Meath forward Vikki Wall says she is fixated on creating some positive Croke Park memories next weekend for herself and her teammates after consecutive TG4 All-Ireland Intermediate Final losses.

Wall and Meath have had to endure excruciating defeats to Tyrone and Tipperary in the last two years, but next weekend Eamonn Murray’s side have Westmeath in their sights.

The all-Leinster All-Ireland Final is seen as a meeting of the two best Intermediate teams in the country, but making her return to Croke Park, Wall is ready to banish those bad memories of 2018 and 2019.

“Every time I think of Croke Park, the thought is: ‘aaah we’ve lost two All-Ireland Finals there’. That’s not the memories you want from playing there,” said Wall.

“That’s our main aim at the moment. I suppose the game could be played anywhere and we’d still have the same hunger for this year’s final.”

Wall (22), is now in her sixth season as a Meath county player, and while she is part of a very young assembly, most of her colleagues have experience of playing senior football in the past.

Meath’s last stint in the top tier came in 2016, a season that ended with relegation to Intermediate. A 3-20 to 1-4 loss against next week’s opponent Westmeath was the first blow to Meath’s hopes that year, and Wall recalls some ‘terrible days’ playing for the county.

“I played that day. It was a tough day and then it was followed by the game against Cork when we only scored three points. That was an even worse day.

“I have definitely been around for some of the terrible days in Meath football. Since Paul (Garrigan), Eamonn (Murray) and the management team have come in; the difference of the team is just outrageous.”

Next Sunday’s battle will be an interesting experiment for Ladies football aficionados. Westmeath have reached the final at the first attempt following their eight years as a senior team, while Meath are back in the final after two finals and a semi-final in three years.

Certainly, Meath have made it to the final with their form-lines taking an upwards trajectory, and after their 4-13 to 0-4 victory over Clare in the Semi-final, Wall knows her side are in a good place. Equally, she knows that the biggest test of the year awaits.

“We played Clare earlier this year in the League and I think we were up by ten points up until the last ten minutes and then they came back and got it to a draw.

“They have serious talent up front, so in the semi-final our main aim was to stop them. I think we did very well at that. We were very happy with that result and performance.

“The Final is going to be a really tough game. I don’t think we can underestimate Westmeath at all. As well as being a senior team for so long, they have kept their place in Division 1 for the last few years too, and they have been facing serious talent up there. It is not easy to stay up at that level.”

As well as working her way through her final year business degree at DCU, Dunboyne player Wall has been chipping away at a side project in the last few months.

A graduate of Gaelscoil Thulach na nÓg in Dunboyne, Wall made her TG4 analyst debut for last weekend’s All-Ireland Junior Final coverage. And while she looked in total control of the experience, a new level of nervousness appeared on the big occasion.

“It was so nerve-racking, much more so than any match I have ever played. I think I’d prefer to stay on the pitch for a while.

“It was great though, a very good experience. I haven’t been using my Irish as much as I’d want to, so it was a nice excuse to use it anyway.

“I went to an Irish primary school and I was in the Gaeltacht a couple of times too. I just love the language and I had tried to keep it up a little bit by myself.

“There was a different type of preparation involved altogether. But it was so nice to see a live match; I can’t remember the last game that I got out to, so that was a nice treat too.”

While Vikki has thrived in the full-forward role this year for Meath – who have honed their counter attacking game brilliantly all season – her younger sister Sarah has had to come to terms with a switch to full-back. After working out cheek to jowl throughout the lockdown, the Wall sisters are just thrilled to be preparing for another All-Ireland Final.

“I’m happy out, I just think that with all that has gone on this year you can appreciate football a lot more.

“Even when lockdown lifted, we were getting out three nights a week and it was such a treat. We got to socialise with people and it was guilt free. You are not doing anything wrong, you are not breaking restrictions. Football has been a God send this year.

“Sarah has moved back in the full-back line, but like myself, I think she’ll play anywhere once she’s on the pitch. We often mark each other in training. It’s always a tough competition, especially against Sarah. You have to think about what she’s going to do and how she will react.

“Overall, it’s just great to still be playing football. I actually loved the structure of the Championship this year. I wouldn’t be complaining if we were playing this late every year.”