LADIES FOOTBALL: ‘We’re not the Waltons by any means, but when it comes to football we can always come to some agreement’ – former Monaghan player Niamh Kindlon 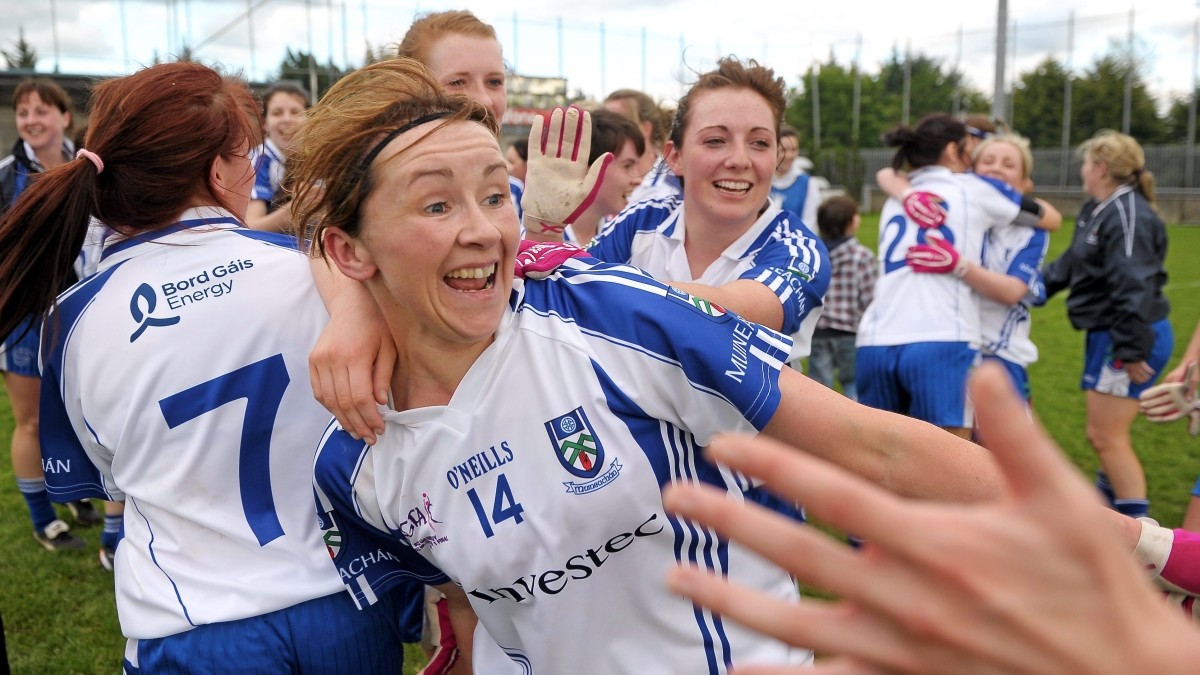 Getting back to training with her U10s and U12s at Magheracloone Mitchells GAA club was a satisfying feeling for Monaghan great Niamh Kindlon, and even though there will be no competitive action for the teams this year it has been a worthwhile exercise.

Alongside her sister Fiona, Niamh has taken charge of the underage game in the club, and in 2019 the due were joint managers for the Monaghan U14s, who reached the All-Ireland Gold final only to be undone by neighbours Tyrone.

They were due to manage the team again this year, but after a few early sessions the season was called to a halt due to Covid-19. Nevertheless, Kindlon says it is vital that young footballers are kept busy in the coming weeks and months.

“We are only back training three weeks now with the club. There are no games for that age group, so we are organising a few friendlies for them. The kids have loved it and are enjoying being back,” said Niamh.

“We could have easily gotten lazy and not bothered coming back seeing as there was no games for them, about five minutes into the session we were so glad we did. Seeing all their little faces smiling was brilliant, it was tough not seeing their friends for a few months.

“Since they came back, we have just played games. We just warm them up and let them off. Most of them are football mad and a lot of them were practicing all summer, but they have missed playing. It has just been brilliant to be back.

“I was talking to a wee girl the other day and her mother said she didn’t want to go on holidays. We have a challenge game coming up and she wasn’t going anywhere.”

Following a successful 18-year inter-county playing career Kindlon retired in 2015. She played on with her club for another two seasons, but finally a run of injuries took its toll and she stopped playing altogether.

As a player Niamh suffered cruciate ligament injuries in both knees, and further ligament and cartilage damage began to affect her professional life as a plumber. Now as a coach she is acutely aware of the training loads that players can be under.

“During the lockdown people were doing as much as they could, but there is no comparison to training with a ball on the pitch. Running the roads or in a garden, doing some ball work is fine, but it’s not the same.

“People were doing strength and conditioning in their sitting rooms and back gardens; it cannot be the same as training together on a field. Unless coaches are very clued in to making sure players warm up properly you will have loads of injuries. I expect there will be a lot of muscle type injuries.

“There was a load of webinars held prior to teams coming back training, to warn coaches of that danger. Some coaches might ignore that warning and think they know better and go into hard slogging and training to get ready for championship. It has to be approached the proper way.”

Keeping a club thriving takes a small army of volunteers, but for a club that has been without a home for two years Magheracloone is doing well. The appearance of a sinkhole down the middle of their ground two years ago meant their facility had to be demolished, and while plans are slowly coming together for their new ground across the road, the incident continues to have an effect on the wider community.

“The pitch and dressing rooms have been demolished. It’s completely flattened.

“We are getting on okay. We have a temporary ground for training. Two farmers gave us fields to train on. We put portacabins in them. It’s grand, you can train away there.

“Our home matches are actually in Co Louth. A neighbouring club that doesn’t have a senior team helps us out.

“We are still in negotiations to build a new complex across the road, but like everything Covid has slowed that down too. We have a plan in place, but we have to approve it at an EGM in the parish. We can’t do that at the moment.

“Apart from the GAA end of it, there are three families that can never go back to their houses. Those residents are all around their 80s and that has been their homeplace for years. Those houses will never be lived in again, and that has affected those families majorly.”

There was some outstanding success for Kindlon early on in her county career and she won her only TG4 All-Ireland in her debut season of 1997 when she was just 16 years old. Three All Stars awards followed, although there wasn’t to be another All-Ireland win despite making it to the final five more times.

Making the decision to stop playing was tough to deal with she admits but taking charge of bringing through the next generation has almost filled that void.

“I had helped out at times in the club, but I never took a team until I retired.

“My dad was over the Monaghan team when I was U14 and we won the All-Ireland in 1995, so we always wanted to emulate him being involved at county level. Down the line, we always said we’d do it.

“In 2019 myself and Fiona took the U14 county team and we had the job again for this year. We had our panel picked but that all ended. I really enjoyed it though, it was very like playing. It’s the closest thing to that buzz and how you felt playing for Monaghan.

“We’re very much joint managers. There are only five years between us in age and we have a good telepathy. We played up along together and have been coaching at U12 level in the club for a few years.

“Sometimes we do ‘good cop, bad cop’ but we had some brilliant selectors there too. We work very well together, even though there’s many the row there too. We’re not the Waltons by any means, but when it comes to football we can always come to some agreement.”

Niamh was a guest on the very first podcast here on ‘SportsDaz’.