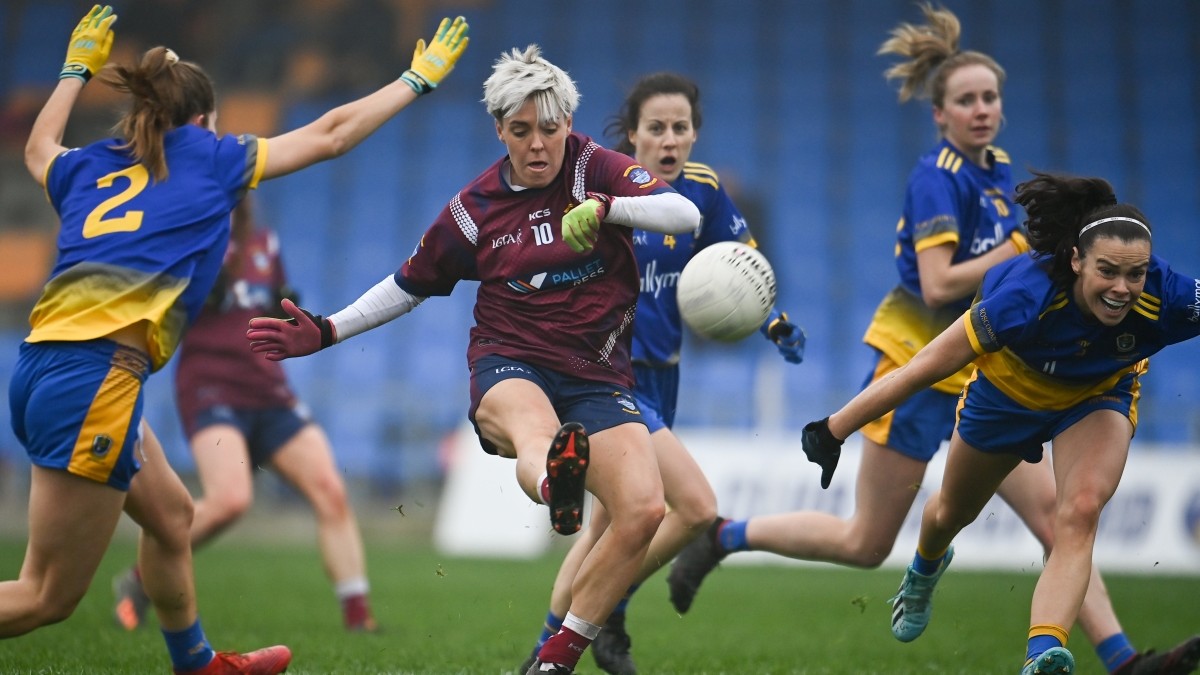 (Leona Archibold of Westmeath gets her shot away under pressure from Honor Ennis, left, and Sinéad Kenny of Roscommon during the TG4 All-Ireland Intermediate Ladies Football Championship Semi-Final match between Roscommon and Westmeath at Glennon Brothers Pearse Park in Longford. Photo by Sam Barnes/Sportsfile)

Goals from Ciara Blundell and Karen Hegarty at either end of the first-half secured Westmeath’s place in next month’s TG4 All-Ireland Intermediate Championship Final, as a powerful second-half surge from Roscommon fell narrowly short in an enthralling contest at Glennon Brothers Pearse Park in Longford.

Westmeath were hotly fancied for this contest in their first year at the Intermediate grade for almost a decade, while Roscommon’s 2018 and 2019 seasons ended in heavy defeats to Meath at this stage of the competition. Add in league status, with Westmeath playing in Division 1 of the Lidl National League while Roscommon have dwelled in Division 3 for some time, and all the indicators suggested a Westmeath win here.

For good measure, the Leinster county got off to the best possible start. A free from Anna Jones on their first attack was spilled by Helena Cummins and Blundell was on hand to get a toe to the ball and tap it in, but Roscommon’s response was exemplary.

With Jenny Higgins and Caroline Conway in superb form at midfield, they set up a series of attacks, earning frees and soon drawing level. Leona Archibold and Blundell looked sharp at the other end of the field and posed a constant threat, but some superb kicks from Aimee O’Connor and Joanne Cregg balanced that out and as the clocked ticked over into first-half injury time, the game was finely poised at 1-5 to 0-8.

That all changed with the last two attacks of the half as Karen Hegarty attempted to kick a point from the left wing, and her shot dropped short and deceived Cummins inside the near post.

The next attack saw the corner-forward add a second score, a point from 25 metres, and Roscommon had it all to do again.

Again, their response at the start of the second-half was everything that manager Michael Finneran could have wanted. Three driving runs ended in three points from close range frees, but critically, that levelling score never came. Several attacks ended in turnovers close to goal, while Westmeath always seemed to be able to keep their noses in front through a breakaway score, more often than not with Archibold centrally involved.

Natalie McHugh and top scorer Fleming cut the gap to the bare minimum with ten minutes remaining, but a free from Leanne Slevin – and a couple of missed chances at the other end – meant that Roscommon had to chase a goal in stoppage time to save their season. The clear cut chance they needed never came.