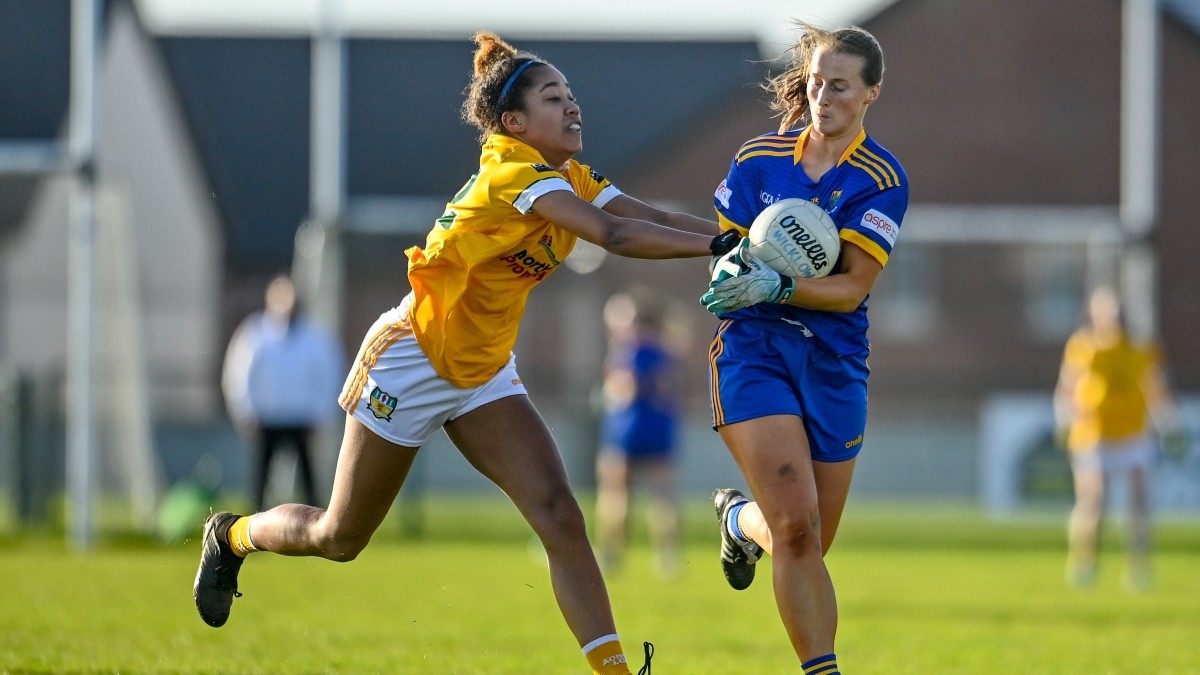 (Sarah Hogan of Wicklow in action against Lara Dahunsi of Antrim during the TG4 All-Ireland Junior Ladies Football Championship Semi-Final match between Antrim and Wicklow at Donaghmore/Ashbourne GAA in Ashbourne, Meath. Photo by Sam Barnes/Sportsfile)

Wicklow were in devastating form as their full-forward line accounted for 6-8 to fire them past Antrim and into a TG4 All-Ireland Junior Championship Final against Fermanagh.

Clodagh Fox hit three goals for the Leinster side, while Meadhbh Deeney, Marie Kealy and Laura Hogan all hit the net in an emphatic performance from Mark Murnaghan’s side.

Antrim were right in touch for most of the first-half and only trailed by three points as the break approached, but Wicklow struck three goals in five minutes, which proved to be decisive.

Played at a sun-drenched Ashbourne, Wicklow got off to a dream start when full forward Deeney slotted past Anna McCann in the third minute.

Antrim made a couple of late changes before throw-in, and one of those inclusions, Lara Dahunsi, clipped over a great point from the right, while Aoife Taggart added a free soon after for the Ulster side.

Deeney and Kealy continued to torment the Antrim full-back line, but they were also guilty of some poor wides in that first half as Wicklow struggled to shake of their opponents despite their dominance.

Cathy Carey closed the gap for Antrim with two lovely points from open play – the first a huge effort from distance – but the game turned on its head before the break. Fox hit her first goal in the 27th minute, before Deeney fired an unstoppable shot to the net. Laura Hogan rounded off an excellent half when her half-blocked effort just about crept over the line before Kealy applied an insurance touch.

Antrim were 4-4 to 0-5 behind at half time but their cause was not aided when Wicklow kicked the first three points after the restart. However, Carey managed to find the net with a powerful shot in the 41st minute to lift their hopes, but they too faded quickly.

Kealy’s crisp strike resulted in Wicklow’s fifth goal, while Fox scored her second and third goals either side of Taggart’s reply for Antrim.

Despite fighting a losing battle, Antrim continued to battle well and substitute Bronagh Devlin made it 7-9 to 3-8 with three minutes remaining. Dahunsi also found the target late on, but there was no denying Wicklow their spot in the final.