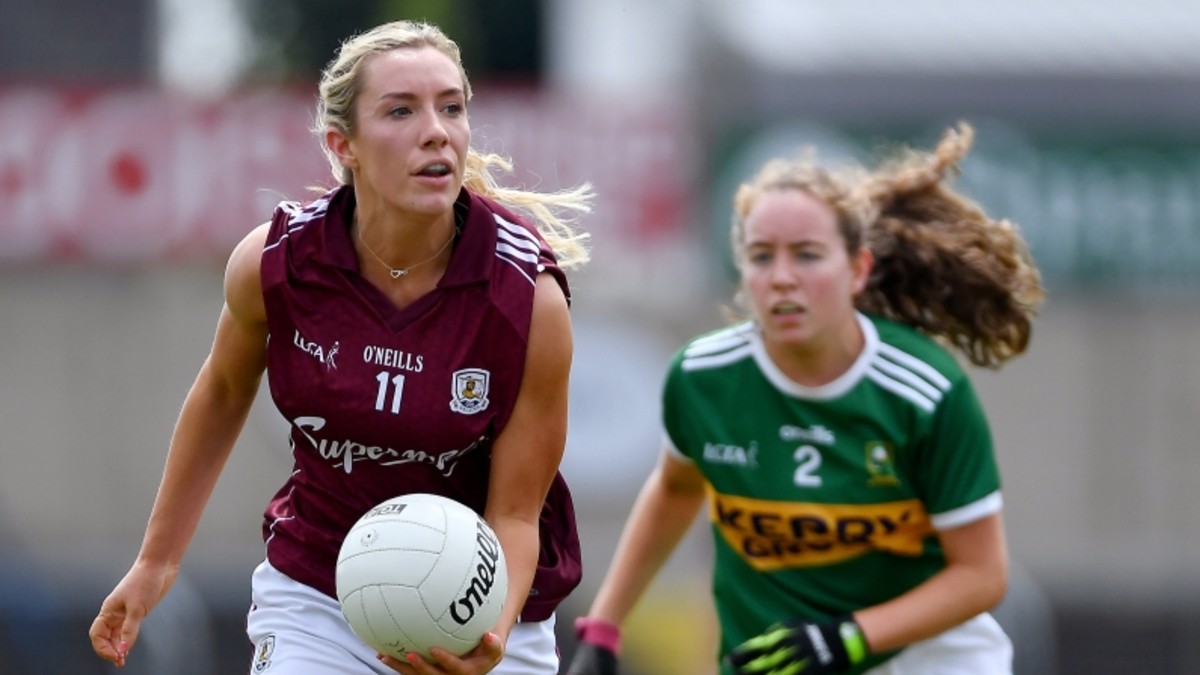 Megan Glynn gets a pass away under pressure from Kerry’s Anna O’Reilly when the teams met in the 2019 TG4 All-Ireland Ladies Football Senior Championship at O’Moore Park. Photo: Piaras Ó Mídheach/Sportsfile

A season of positives ended with a winter of regret for Megan Glynn and the Galway ladies footballers, but after learning so much from the group’s first TG4 All-Ireland final appearance she feels there is much more to come.

Glynn (23) will return to a fourth year studying medicine at Trinity College next week and with work placement at St James’s Hospital front and centre, she is priming herself for a hectic return.

A hamstring injury has slowed her season with her home club Claregalway, but after spending the summer at home, her focus swings back towards her studies and taking on the fight against Covid.

“College all starts again next week, so I’m enjoying these few days,” said centre-forward Glynn, who is into her seventh year as an inter-county player with Tim Rabbit’s side.

“I finished my exams in June, but I had four weeks of online lectures to do after that. I did a bit of work around the place, nothing too hectic really, but it’ll be busy again from next week.

“Last year we were supposed to have had placement all year round, but it was cut short. They asked us to volunteer in an ICU if we were needed but we weren’t needed in the end.

“We are going straight back on placement next week now, and with the cases rising too it’s a bit worrying. I’ll be in St James’s Hospital in Dublin so it will be pretty busy there I’m sure.”

With a return to county football still a couple of months away, Glynn has been able to give total focus to the club game in recent months.

As a 16-year-old wing back she played a major part in helping Claregalway claim the 2013 All-Ireland Intermediate Club title, but since they have stepped up to the senior grade in Galway there has been a fairly powerful force blocking their progress.

Defeats in the county finals of 2015, 2016 and again last year all arrived at the hands of Kilkerrin/Clonberne, and Glynn says last year’s All-Ireland finalists are the side that everyone aspires to beat in the county.

“They are probably our biggest enemies and competitors. They are very good though, to be fair. They were very unlucky not to win the All-Ireland last year because they worked so hard. But I’m hoping that someone else will steal the throne this year.

“It’s funny playing against their girls from the county team, you know what to expect from them. You know who’s more physical, who’s quicker. Maybe you think about it too much in your head. But we get on really well with them.

“We have a very good young team. It’s brilliant the players that are coming through, our club is so strong underage. I’m 23 now, but it’s so weird. I feel like I’m still one of the younger ones but I’m not really.”

After months of training at home in Claregalway alongside her brother Jack, who is hoping to break into Padraic Joyce’s Galway senior team after captaining the county U-20s last year, it was a cruel setback to tear her hamstring in the second training session post lockdown.

“It’s five weeks ago now. I don’t know, maybe I did too much on my own. I should have pulled out when it happened, but next time I’ll stop when I feel it.

“Moving home to Galway for the summer I had loads of time. It was good to have someone to train with. We were doing conditioning runs in the field beside us at home.

“The hamstring is a bit frustrating and it’s taking a long time to get right and get back. It was a Grade 2 tear and that normally takes four to six weeks, but hopefully I can play a few minutes this weekend.”

The temptation to dive back into playing must be huge after such a long lay-off, but Glynn is well used to waiting for her chance.

A Player of the Match display in last year’s TG4 All-Ireland semi-final against Mayo at Croke Park was ‘one of the best days’ but following it with defeat to Dublin in the final left her frustrated for the winter.

“Well we lost, so yeah, there were definitely a few regrets. The weather was very tough, it was awful slippy. And even the lack of experience of playing in Croke Park with so much noise around you, it was so different to what I’m used to.

Next month Galway LGFA will host a golf competition to raise funds for their county teams and Glynn hopes to be able to tee off for the event in Tuam on 11 and 12 September.

“If I’m home from college and fully fit I’ll have to play this one. It’s such a good idea: a lot of people have picked up golf in the last few months and so many people are mad about the game too, so hopefully we’ll get a good crowd out.

“I think it’s brilliant that ladies football and sport in general is getting more coverage and attention. Especially for younger girls, they now know that their sport is just as important. It gives them role models to look up to.

“When I was younger, I probably didn’t watch that many ladies matches. I wasn’t really aware of it; I don’t know if the coverage wasn’t there or what. I can’t think of one that stood out for me when I was younger, but it’s different now.”