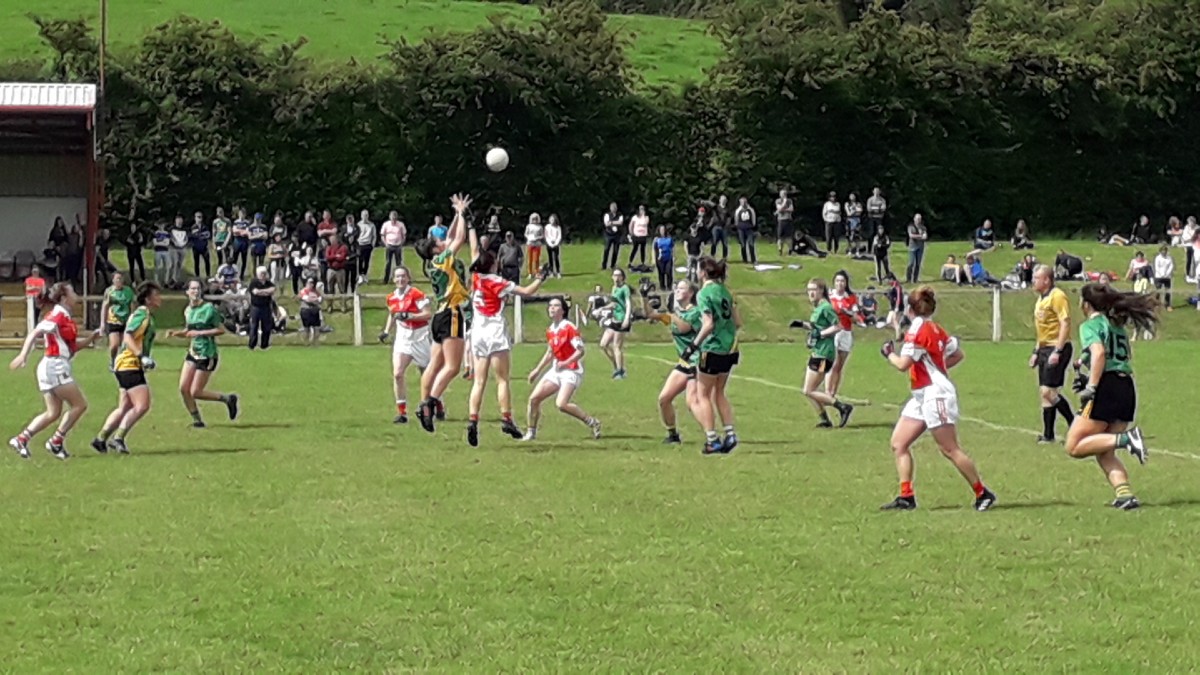 Donaghmoyne left no doubts about their intentions in this year’s senior ladies football club championship as they commenced their county defence with an emphatic 33-point victory.

Two goals each from Louise Kerley and Cathriona McConnell along with strikes for Niamh Callan, Lauren Garland and Cora Courtney ensured Francie Coleman’s side remain the team to beat.

Newly crowned intermediate champions O’Neill Shamrocks were much better than the score line suggested and a Caoimhe Ward goal on 18 minutes had them within three of their opponents.  But the lessons learned from this major leap in standards will determine how their future progress.

There was a strong cross wind in Donaghmoyne but the sun’s presence ensured an enjoyable day for those spectators lucky to be in attendance.  And the Ulster champions wasted little time welcoming them back to competitive football.

From the throw-in won by Cora Courtney and captain Amanda Casey/Finnegan, the latter supplied Louise Kerley who picked out Niamh Callan and the centre forward found the net after just 12 seconds.

Kerley would have a productive day totalling 2-10 and she converted the first two frees by the fourth minute for a 1-2 to 0-0 advantage.  Three minutes later, O’Neill’s got off the mark through a Muireann Atkinson placed ball.

The Clontibert outfit started to settle and held firm with their opponents despite the concession of two more Kerley scores.  But they announced their arrival in the Monaghan topflight just after the quarter hour.

Aoife Flanagan gained ground down the left before supplying Atkinson who sent the ball into the danger area.  The advancing Ward contested possession before getting the goal that left it 1-4 to 1-1.

Suddenly, the contest was alive but Donaghmoyne replied with two more Kerley white flags.  One area of improvement they will take from this outing is 11 first half wides.

Atkinson responded for Shamrocks on 28 minutes leaving it 1-6 to 1-2 but the game’s critical score came before half-time.  McConnell took over the free taking duties and her ball landed in the square – Kerley got the touch for goal number two and there was seven between them.

Rosemary Courtney was another of Donaghmoyne’s top performers and she pointed before the break leaving it 2-7 to 1-2.  However, when Atkinson hit back just after the restart, the visitors looked set up for an assault, especially after Niamh Brennan forced a save from Linda Martin.

But their hopes were short lived as Donaghmoyne corrected their wayward shooting and produced a ruthless second half demolition.  Two more Kerley minors were complimented by Rosemary Courtney before McConnell made it 2-11 to 1-3 on 40 minutes.

Within 60 seconds, Rosemary Courtney was the provider with a cross-field ball and McConnell found space for Donaghmoyne’s third goal.

Kerley, Cora Courtney and Callan got the points; Kerley and McConnell doubled their goal tallies; and Cora Courtney managed a major of her own in injury time.  Donaghmoyne are still the team to beat in Monaghan and they let their rivals know it!

This was always going to be a tough lesson for O’Neill’s and the step up required was made coldly displayed.  But a coming side who secured league, championship and sevens silverware last season can use this result to establish themselves in the senior ranks.

Both sides are out in action again next Saturday (25th July – 7pm).  Donaghmoyne travel to Emyvale; while O’Neill Shamrocks host Latton in a must-win encounter for both teams.