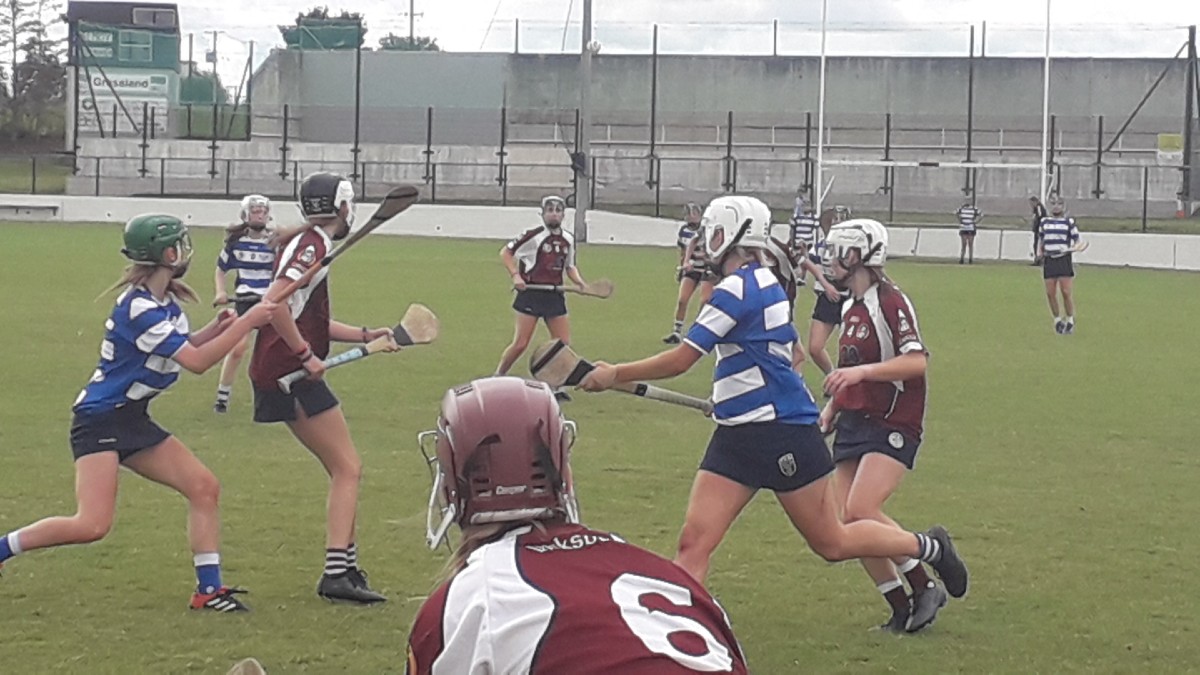 The Kilkenny senior camogie championship began in explosive fashion as St. Lachtain’s/Lisdowney secured a one-point victory over defending champions Dicksboro in Group B.

Goals from Lydia Fitzpatrick and Chloe Delaney ensured the challengers held the scoring initiative despite enduring a nervous conclusion.

Indeed, Dicksboro will be kicking themselves that they did not manage to save this tie as four late wides meant their title defence began on a losing note.

The hosts were expected to face a fierce challenge and the visitors did not disappoint.  Kilkenny All-Star Anne Dalton opened St. Lachtain’s account from a third minute free.

But her influence would be felt more as the game progressed.  Delaney’s pass allowed Dalton to make it 0-2 to 0- 0 on seven minutes.

Another who enjoyed a solid hour in blue and white was centre back Claire Phelan and her long ball on nine minutes allowed Lisdowney make it 0-3 to 0-0.

Dicksboro struggled to settle but finally opened their account 60 seconds later as Ciara Phelan picked out Caoimhe Dowling.  They controlled the middle third of this half and Aobha O’Gorman added another white flag three minutes later.

And when Jenny Clifford was taken down in the 20th minute, captain Orla Hanrick opted for the point to level affairs.

The momentum was with Dicksboro, but it was short lived, and Dalton hit back with two points, the latter by another Claire Phelan delivery, to make it 0-5 to 0-3.

But the first half’s decisive score came four minutes before half-time.  The Bergins, Emma and Julieanne, combined to send Fitzpatrick through and her low shot into the corner gave Sonja Buggy no chance.

O’Gorman replied for Dicksboro to leave it 1-5 to 0-4 at the interval and the second half began in dramatic style with both sides finding the net inside 60 seconds.

Only 17 seconds passed when Hanrick took advantage of a moment of hesitancy from opposing keeper Sinead Farrell, who produced two critical first half stops.  But Dicksboro finally got their goal at the third time of asking.

However, St. Lachtain’s/Lisdowney did not waste time and struck back emphatically as Chloe Delaney got through for their second major to make it 2-5 to 1-4 on 31 minutes.

Dicksboro did not let the quick concession disrupt their rhythm as they clawed their way back into contention.  Ciara Phelan, O’Gorman and a Hanrick free reduced the deficit to one point on 39 minutes.

But the St. Lachtain’s threat was always evident as Delaney nearly got through for another green flag following a Dalton flick.  But the latter did take advantage of Laura Hegarty’s pass on 47 minutes for a two-point advantage.

Lucinda Gahan replied for Dicksboro, but another Dalton effort resulted in a disputed 45 which Fitzpatrick converted.  And the former had another chance that caused controversy but this time, the decision did not go Lisdowney’s way.

They would not score again as the reigning champions chased salvation in this contest.  Substitute Amy Clifford profited from Clifford’s industry to leave the minimum between them, but it was not enough as a selection of late shots failed to find the target.

Dicksboro have suffered an opening day blow but being pushed on the back foot should put their rivals on alert.  However, this was St. Lachtain’s/Lisdowney’s day and they were worthy winners.

A final note must go to referee Peter Roche who kept the whistle intrusions to a minimum and allowed the teams play.  It provided an enjoyable morning for the few supporters lucky to be in attendance.