“You can only control how you react” – Sarah Dervan 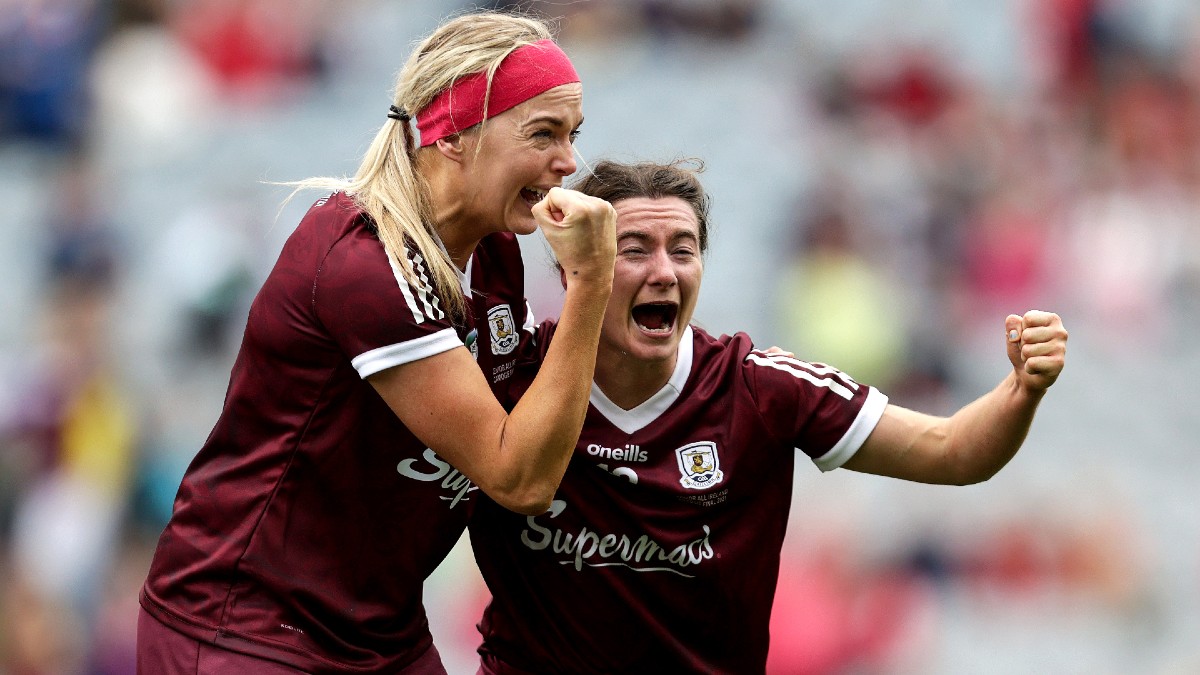 Sarah Dervan became the first Galwegian to lift the O’Duffy Cup twice after the Tribeswomen’s dramatic All-Ireland senior camogie final triumph over Cork but that sort of history was never a motivating force for the colossal full-back.

In a county never short of individual talent, manager Cathal Murray has emphasised unity, a collective selflessness and workrate as the means to get over the line after a catalogue of near-misses and they did so for the second time in three years following one of the most captivating and high-octane All-Ireland finals camogie has ever produced.

“There’s 36 girls, we’re all leaders and we all went up those steps today as one,” said Dervan, cutting off any attempt to speak about personal achievement. “It’s just been an unbelievable feeling and it just goes to show that if you work hard, dreams can come true so I’m just absolutely delighted.

“You can only control how you react,” she added of Galway’s response to Katrina Mackey’s goal, which saw them fall three points behind entering the final quarter but they outscored the Rebels by 1-4 to a point in this period, Siobhán McGrath finishing craftily for a 57th minute goal and her sister Orlaith driving over two brilliant points to seal the deal.

“Years gone by, we reacted in the wrong way and this year we said that no matter what Cork throw at us, we’re going to react the way we wanted to and we drove and got the next point and put a little bit of belief back in us.

“We dug really deep and every single one of those girls fought with their hearts, I’m just so delighted to be on the right side of it.”

It was in contrast to what happened when Denise Gaule goaled from a penalty down the finishing stretch in last year’s decider.

“It was a hard one to take because we were probably in the game, nearly like a replica of this one, until the 54th minute when the penalty changed it, we didn’t react the way we wanted to that day.

“Our goal this year was to get back to an All-Ireland and when we did, we were going to fight for our lives and that’s what we did. We worked hard and we had the belief that if we worked hard, we’d win.”

It was no surprise that she singled out the management team, headed by Murray, for special praise.

“They have brought Galway camogie to elite level and the work they do behind the scenes, it’s testament to our management that we are on the right side of it two years out of three.

“Robbie Lane has been exceptional, our S&C coach and Cathal always demands the best for us. We always get fed, we always get treated exactly the way any county hurling team would and I think that’s huge.

“He never let us down, he always fought for us. It’s an elite level now and I’m just so delighted to have such a massive backroom team that have huge experience and knowledge and it’s really because of them, that’s why we’re here.”

And the moment when she knew they had it in the bag?

“Orlaith McGrath sticking over the last point and I looked up at and was 63.04 I think and I went, ‘Oh my God, blow the whistle.’ That was the moment, an unbelievable feeling. Fair play to her, she put her hand up and took the confidence she has and stuck that ball over the bar. The girls, they all died with their boots on today and worked hard and we were on the right side of it which was great.”

It was a big day for the McGrath siblings, who had missed out in 2019 and player of the match Aoife Donohue revealed her confidence in the Sarsfields sisters.

“When the (Mackey) goal went in, I think there was maybe ten minutes left and we got two points to bring it back,” Donohue recalled. “I was saying to the girls inside, with Orlaith and Siobhán, it was just gonna take one ball and by God, the one that they got they made it count and it really got us over the line.

“I was watching Orlaith McGrath’s (second) point (from distance) go over the bar for about five minutes!”

Describing the victory as “the sweetest one yet”, the tireless Mullagh dynamo admitted that she had little left in the tank at the final whistle. Little wonder.

“I was absolutely out on my feet. It was ball for ball. They’d go down the pitch and get a score, we’d go up the pitch to get a score. The way the game finished, it was just a real sweet win and such a battle.

“I’m sure it was a great game to watch and it’s great for camogie. You’d be hoping now that the coverage of camogie (will keep going), people watching camogie matches tuned in, I think they got a right game of camogie. A real battle all the way to the last three minutes.

“We’ve had some huge performances through the year and we’ve been accused maybe of not firing on all cylinders but we didn’t care as long as we were on the right side of the result. I think two great semi-finals, quarter-finals and camogie is in a great place going forward.”

That is certainly true as the standard of all sectors from skill, fitness, strength and tactical nous has gone through the roof.

Just like her skipper, Donohue wasn’t going to dwell on her award.

“I thought our backs were outstanding. It’s not about me, it’s about the team. I’m happy to play any part and I couldn’t care if we never touched a ball as long as we win the game.”

“I’m delighted for the group of players and this team. We’ve often been criticised coming into All-Ireland final and all year for not performing but I think the fight got us over the line. It was a great team effort.”

Like Dervan, Niamh Kilkenny was forced into postponing her wedding by Covid-19 last year but while the captain will have Seán O’Duffy’s memorial at the top table when her nuptials finally take place next March, Kilkenny walked up the aisle belatedly to exchange vows with former Galway hurler Cyril Donnellan at the beginning of August.

“It hasn’t been a bad couple of months!” said the grinning midfielder, who was switched to centre-forward in the second half scored an absolutely stunning point early in the third quarter that was a testament to her renowned footwork as much as her accuracy

“I can’t really remember it but I just remember thinking not to get blocked down so I just tried to create a bit of space. Thankfully I did and thankfully it went over the bar.

“It’s a great feeling to be back as winners. It’s a feeling you can’t describe. We really had it tough when the goal went in, I remember looking up at the clock and saw we had ten minutes left, we still had time. The girls were just unbelievable, they were outstanding the way everyone put their shoulder to the wheel and worked hard and thankfully we came out on top.

“The way Ailish created that score for Siobhán, and the way Siobhán executed it then was unbelievable. It gave us just the kick we needed at the right time and we drove on from there.

“Our defence have been unbelievable all year. Even against Tipperary in the semi-final, the amount of goal chances they kept out. When you see a team bearing down on goals, you know that they’re gonna earn it if they’re going to get a score.

“Any time you win an All-Ireland is a sweet victory but the character the girls showed when that goal went in. We didn’t drop our heads. That’s something the management have instilled in us, belief right up to the end and thankfully we saw it out.”

United and on message, on and off the pitch.